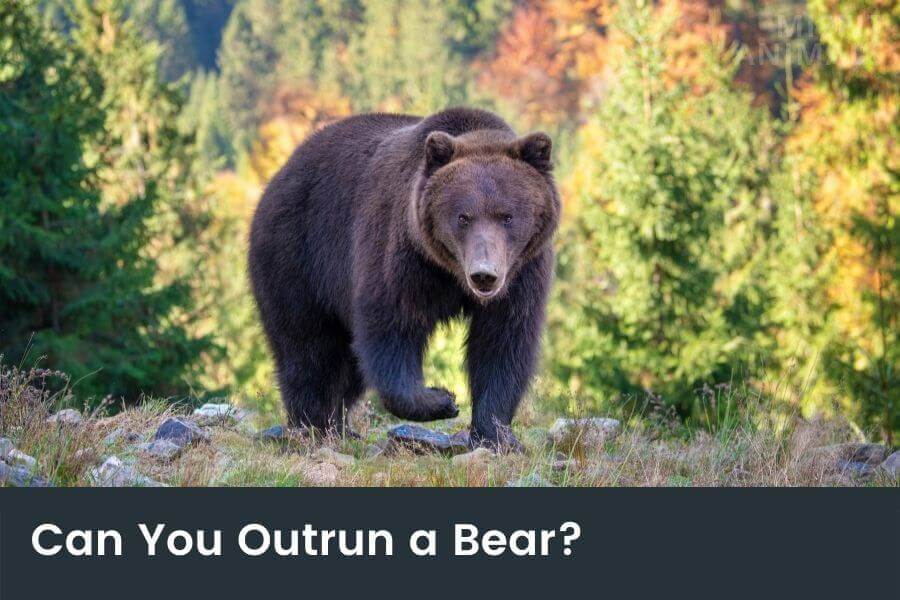 No, you can’t outrun a bear. Even though these animals are very large, they can move pretty fast, from 20-35 mph depending on the species. As humans are much slower, a bear could easily catch you. Running is not a viable option to escape a bear.

Because bears are very large and very bulky, most people think they’re slow. This is not the case.

Yes, bears are large, but they’re also very muscular. They use their muscles, and low center of gravity, to propel them forward at impressive speeds.

In this article, we’ll explore how fast bears are, whether you can outrun any type of bear, or how you should otherwise escape a bear attack.

Bears run on all four legs, also called quadrupedalism. This way, they can use all of their limbs to run, achieving greater speeds as a result.

When it comes to running, bears are incredibly efficient quadrupeds. This means that they run on all fours, as opposed to on two legs like humans.

When they run, they’re close to the ground, resulting in a low center of gravity. This additionally allows them to dig into the earth with their claws. The traction they generate from this motion also helps them reach higher speeds.

Bears can reach speeds of up to 35 mph, which is pretty fast for a creature of their size. They can easily outrun most humans, so it’s best not to try and outrun a bear if you encounter one in the wild.

They use their powerful four legs to run for long distances, making them excellent hunters. They can cover a lot of ground quickly, which helps them find prey in the wild.

When they’re not hunting, bears also enjoy running around in play.

Can You Outrun a Bear?

No, you can’t outrun a bear. Even though these animals are very large, they can move pretty fast, from 20-35 mph depending on the species.

Research has shown that bears can cover a lot of ground in a short amount of time, so if you encounter one while out on a run, your best bet is to stop and make yourself as small as possible.

Bears can be very dangerous animals, so it’s important to know how to stay safe during an encounter.

You should act accordingly depending on the type of bear you encounter.

Can You Outrun a Grizzly Bear?

No, you can’t outrun a grizzly bear. Grizzly bears can run up to 30 mph, due to the large muscles on their shoulders (the “bear hump”.

Research shows that grizzlies can easily catch up to prey that is running away from them. That’s why it’s important to never run from a bear – when you run, they might see you as prey.

If you do find yourself in a situation where a grizzly bear is chasing you, the best shot at escaping is to back away slowly.

In the extreme situation that the grizzly bear attacks, you should make yourself as small as possible. Cover your head and pray for the best.

Can You Outrun a Polar Bear?

No, you can’t outrun a polar bear. Polar bears are large, but they can run around 35 mph. One thing to consider, though, is that polar bears can sprint for a very long time.

There’s a big difference as to how polar bears move, compared to other bears such as black bears.

They have specialized feet, that allows them to both walk and run on ice without slipping. This also results in a different movement when they walk and run.

Polar bears sway their hips a lot when walking. They also gallop differently than black bears (transverse vs. rotary gallop).[1]

If you observe a polar bear in the wild, keep your distance. It’s best to be safe than sorry with these animals.

Finally, if a polar bear attacks you, do not fight back. Retaliation will only worsen the problem. Keep calm and use your surroundings as weapons.

Can You Outrun a Black Bear?

No, you can’t outrun a black bear. Research indicates that black bears can reach speeds of up to 35 mph and can cover distances of up to 25 miles per day.

Black bears are smaller than grizzlies and polar bears. As a result, they have an easier time moving around. They don’t carry as much weight.

When it comes to escaping a black bear, the approach is much different than encountering a grizzly bear. With black bears, you need to show your dominance. Stan up tall, make loud noises, and do everything you can to scare them.

Can You Outrun a Bear on a Bike?

No, you most likely can’t outrun a bear, even on a bike. Bears can run 20-35 mph depending on the species. Most people ride their bikes between 15-22 mph[3].

Bears are big animals, but they move rapidly. Even faster than most people on bikes.

However, the numbers above in regards to riding speed are during long stretches. If you were to spring, you may just escape the bear – but only for a short while.

That said, you still shouldn’t run from bears. This may only aggravate it, or make it think you’re a prey animal.

It’s a myth that bears can’t run downhill. They definitely can, even as fast as a horse.

Bears can run downhills, and they can do so just as fast as when running on plain terrain. Some recordings show that bears can reach speeds upwards of 37 mph downhill.

When bears run downhill, they use a different tactic than when they’re running uphill. Rather than using all four legs to propel themselves forward, they’ll use their back two legs to push off, and their front legs to avoid falling.

This helps them maintain their speed without tripping.

Can You Outrun a Bear Downhill?

No, you can’t outrun a bear downhill either. As they can run just as fast downhill, as when they’re running on normal terrain, you wouldn’t stand a chance.

Bears can reach speeds of up to 35 mph, making it virtually impossible for a human to outrun one.

While it may be tempting to try and outpace an oncoming bear, doing so is not only dangerous but can also be counterproductive.

By fleeing, you may inadvertently trigger the bear’s hunting instinct and cause it to give chase.

How to Escape a Bear Attack

If you find yourself in the unfortunate situation of being attacked by a bear, your best chance of survival is to try to escape slowly and silently.

Trying to outrun a bear is not likely to be successful, as they can run up to 35 mph.

This is due to their natural behavior. Black bears are, by nature, more submissive, and can be scared away. The opposite is true about grizzlies, polar bears, and other brown bears.

Humans can’t outrun a bear. Bears can move pretty fast, from 20-35 mph depending on the species.

If you encounter a bear while hiking or camping, it is important to know how to properly react so that you can avoid being attacked.

The best advice is to back away slowly. If you can get out of the situation without the bear noticing you, do so.

How Fast Can a Bear Run?

Depending on the species, bears can run anywhere from 20-35 mph. This means that if you ever find yourself in a situation where you have to run from a bear, your chances of outrunning it are slim to none.

Related: How Fast Can a Bear Run?

How Fast Can a Human Run?

An average human can only run about 10-12 mph (about 17 kph) at max capacity. This can vary depending on the person’s weight, muscle mass, and other factors. This might not seem very fast in comparison to some of the animals out there, but for a human, it’s pretty speedy.