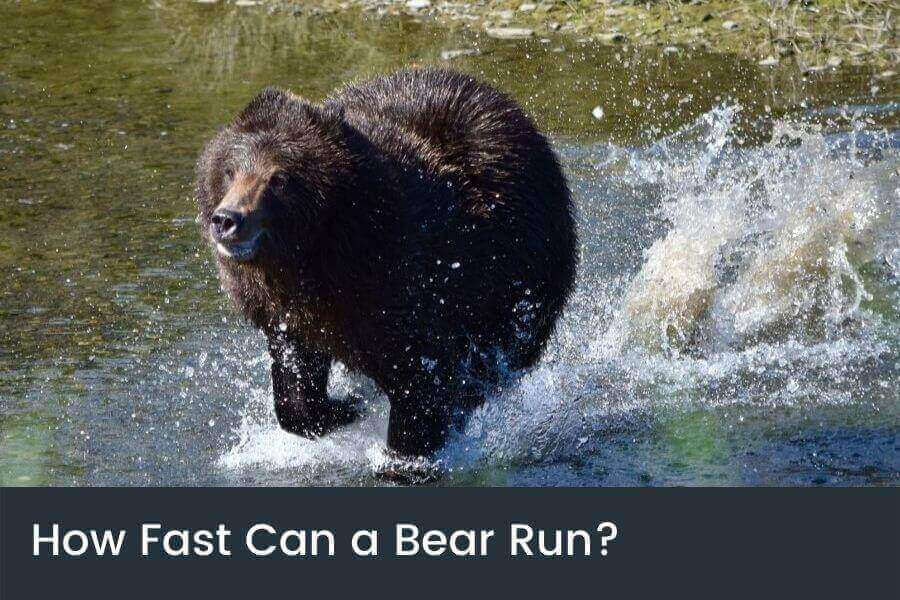 Bears can run between 25-35 mph (40-56 kph), depending on the species. They can run this fast due to their large muscles and long claws.

Do you know how fast a bear can run? Believe it or not, bears are fast.

While they’re very large and can weigh more than 1,000 pounds, they are incredibly agile and can outrun most other animals.

In this article, we will take a closer look at how fast bears can run, as well as compare the running speeds of different species.

How Fast Can a Bear Run?

Bears can run 25-35 mph. While they’re very large and can weigh way above 1,000 pounds (depending on the species) they are surprisingly fast when they need to.

While it does sound surprising, bears can run quite fast.

They are able to reach high speeds by utilizing their large muscles, sharp claws, and exceptional balance.

In order to achieve optimal running form, bears will typically lean down and keep their head low to the ground. This helps them maintain momentum as they run.

The running speed of bears depends on the species – read on to find out more.

Can You Outrun a Bear?

The average person can run between 13-20 mph, depending on gender and level of cardio. However, humans can’t run very far at this pace.

Bears, on the other hand, can run up to 35 mph, and they sprint for longer than humans can.

Even if you could run faster than a bear, it wouldn’t be worth trying. Bears have been known to chase down their prey for miles.

Related: Can you outrun a bear?

How Are Bears So Fast?

Bears can run so fast because their muscles are so big. They can outpace most animals is due to their powerful muscles and high aerobic capacity.[1]

Animals are typically either fast sprinters or long-distance runners.

An example of the first is cheetahs. They have the highest running speed of all animals, but they can only run for a few hundred feet.

An example of the latter is wolves, who are better suited for running longer distances. Wolves can run up to 30-40 miles a day at a low pace.

The deciding factor is how their muscles are built: either for aerobic capacity (long, slow run) or anaerobic capacity (fast, short runs). Bears’ muscles can do both, as they can both sprint fast, but also travel for longer distances (though not as far as wolves).

Bears have some of the strongest muscles among land mammals. These are needed to carry their weight.

Bears also have large claws that can grow to be more than four inches long. With their long claws, they can achieve more traction when running, which affects their running speed.

Their claws effectively help them grip the ground better, which avoids slippage and wasted energy.

Yes, bears can run downhill. The myth about bears not being able to run downhill is exactly that, a myth. If you’re ever chased by a bear, don’t try running downhill, as it’ll only make them catch you faster.

Bears’ center of gravity is close to the ground, which gives them stability when running. Just because they’re large, and have relatively short legs, doesn’t mean they can’t run downhill.

Their speed downhill helps them when they’re chasing prey or trying to escape danger. They can cover a lot of ground quickly, which gives them an advantage over their prey or enemies.

Bear Speed Depending on Species

How Fast Can a Grizzly Bear Run?

Grizzly Bear can run up to 30 mph. Their muscle-topped shoulders[2], in particular, power their forelimbs to run, sprint, and dig, allowing these bears to run at speeds of up to 30 mph over short distances.

This is considerably faster than the speed of a human runner, which typically tops out at around 16 mph.

How Fast Can a Black Bear Run?

These smaller bears are among the fastest of all the bear species. As they’re smaller, they don’t need as much power to reach higher speeds.

Black bears also use their speed to climb trees, as they’ll often have a running start when scaling trees. When they climb, it almost looks like they’re simply running up the tree.

How Fast Can a Polar Bear Run?

Polar bears are one of the largest land carnivores in the world. However, due to their size, they’re not the fastest bears, as they’re able to run up to 25 mph.

They use their speed to catch prey, mostly ringed and bearded seals.

How Fast Can a Sun Bear Run?

Sun bears are the smallest of the eight bear species. They weigh about 150-300 pounds and can run up to 30 mph. This makes them good at hunting prey and escaping danger.

They are reddish-brown in color and have a white V-shaped patch on their chest.

How Fast Can a Spectacled Bear Run?

Spectacled bears are able to run up to 30 mph, making them one of the fastest bears. They use their speed to outrun predators and to travel long distances in search of food.

Spectacled bears have a thick coat of fur that helps protect them from the cold weather and from predators. They also have sharp claws that help them climb trees and dig for food.

How Fast Can a Panda Bear Run?

Pandas are one of the world’s slowest bears. They can typically only run up to 20 mph, which is still pretty fast for a panda.

In the wild, they use their speed to outrun predators. One explanation as to why panda bears are slow, compared to other bears, is that they aren’t hunters. Panda’s are herbivores, meaning they just eat plants.

How Fast Can an Asiatic Black Bear Run?

Asiatic black bears are on the smaller end of the spectrum, but that doesn’t mean they’re slow. In fact, they can run up to 25 mph.

This makes them very difficult for predators to take down, and also helps them when hunting prey.

Similar to American black bears, they also use their speed to climb trees.

How Fast Can a Sloth Bear Run?

Sloth bears are also one of the slowest bear species. Similar to sloths, they are lazy animals and hence haven’t developed capabilities for high running speeds.

They can only run up to 20 mph, making them easy prey for other predators in the wild.

While they may not be able to outrun their enemies, they make up for it with their powerful jaws and sharp claws. Sloth bears are also excellent climbers, and often use trees to hide from predators or ambush prey.

How Fast Can a Kodiak Bear Run?

Kodiak Bears, the largest bears in the world, are able to run up roughly 30 mph. They are able to reach such high speeds by using their large size and powerful muscles to their advantage.

While they may not be the fastest animals in the world, they are able to run faster than most other bears and can easily outpace a human.

How Fast Can a Grizzly Bear Run 100 Yards?

Grizzly bears can run faster than Usain bolt at top speed, and would most likely be able to run 100 yards in 7 to 8 seconds.

Even though the top speed of a grizzly is high, they can only maintain that speed for a very short distance.

How Far Can a Bear Run at Full Speed?

While bears have great endurance, as they travel up to 30 miles per day, they can only run at max speed for a few seconds. Due to their high speed, they still cover more than 500 feet (166 yards or 150 meters) in just 10 seconds at full speed.

How Fast Are Bears Compared to Humans?

Bears are much faster than humans. While they’re very large and can weigh more than 1,000 pounds, they can run up 25-35 mph (depending on the species).

It has shown that bears are much faster than humans, who usually top out at about 20 mph (though the fastest man alive has run at a pace of 27 mph).

This is likely due to the difference in muscle mass compared to body mass – a bear’s muscle power and length of stride can more easily generate greater speeds than those of a human.

Can a Dog Outrun a Bear?

Most dogs can’t outrun bears, but some can. The greyhound, the fastest dog, can run up to 45 mph. That’s much faster than the average bear, which runs at speeds of 25-35 mph.

However, the average speed of a dog is much lower, closer to 15-20 mph, which is slower than bears.

Are Bears or Wolves Faster?

Wolves can run about 36-38 mph, making them faster than bears. Bears only reach speeds of 25-35 mph.

Wolves also have more endurance and can run up to 30 miles a day, if they keep their pace about 5 mph. Hence, wolves are the superior runners compared to bears.

Bears are surprisingly fast creatures, able to run up to 25-35 mph depending on the species. They are able to reach these speeds by using their large body mass and powerful legs combined with their long strides.

While they may seem slow and lumbering, when a bear begins running it can be quite a sight to behold.

Bears are definitely fast animals and should be avoided if possible when running in the wild.