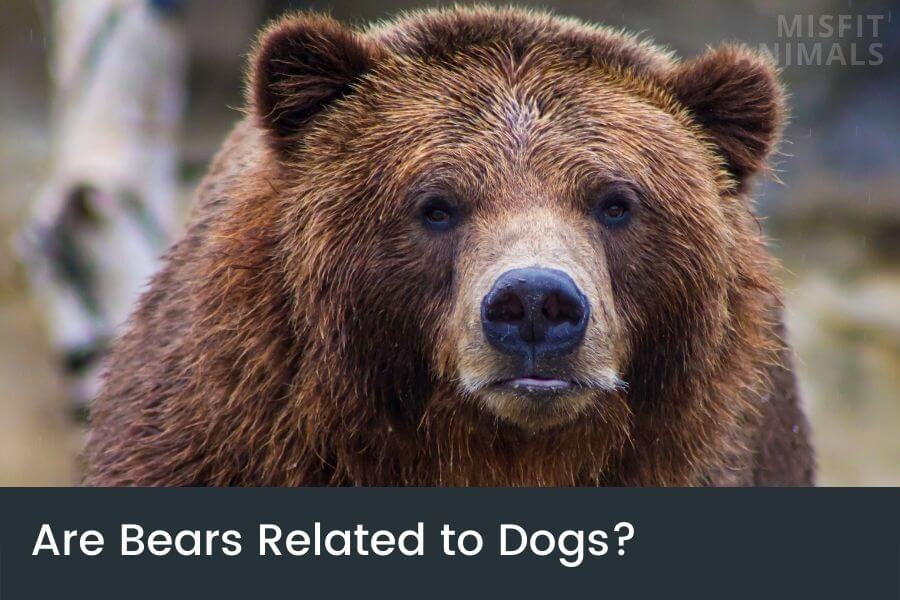 Bears are not related to dogs. Bears are not canines, as they’re not part of the Canidae family, but the Ursidae family. However, bears are categorized as Caniforms, doglike carnivorans, and hence resemble dogs more than cats.

Bears are one of the most commonly confused animals when it comes to their relation to other mammals.

Many people are under the impression that bears are related to dogs, as they are both classified as mammals.

However, this could not be further from the truth. But how is that?

In this article, we’ll discuss the relationship between bears and dogs, if there is any, and how they differ.

Are Bears Related to Dogs?

No, bears aren’t related to dogs. Dogs are part of the Canidae family, whereas bears are related to the Ursidae family. While all mammals are very distant relatives, bears and dogs aren’t considered related.

However, they are not considered related because they come from different branches of the evolutionary tree.

The two families are not related and have different evolutionary paths. However, they are still both part of the mammalian class and share a lot of common characteristics.

All mammals are, to some extent, related, as they all evolved from a common distant ancestor.

While bears are technically carnivores, as they eat meat, they are actually omnivorous as they feed on both plants and meat (with the exception of polar bears, which are considered carnivores).[1]

They’re both carnivorous mammals, but that’s about where their relationship ends.

Both families contain numerous species, which all differ in size, color, and behavior.

While there are some general characteristics that are shared by all mammals, such as the fact that they give birth to live young, nurse their offspring with milk, and have fur, bears and dogs are very different animals.

Bears are omnivores and eat a variety of things – including meat – while dogs are carnivores and only eat meat.

Are Bears Related to Canines?

No, bears are not related to canines. However, they’re more related to dogs than to cats.

While all mammals are somewhat related, bears and dogs are not considered to be related. The two species parted ways millions of years ago.[2]

When that’s said, bears are considered to be more related to dogs than cats, though not by a lot. Bears are as related to dogs, as they are to deer, raccoons, and other mammals.

Are Bears Related to Felines?

Felines are one of the most common pet animals in the world[3]. They are carnivorous animals, meaning that they only eat meat.

The Ursidae and Canidae families are very different. The first contains bears, while the second contains dog-like animals, such as dogs, wolves, and similar animals.

The Ursidae family is made up of bears. There are eight species alive today:

Bears all share certain characteristics, such as short tails, nonretractable claws, and a keen sense of smell. Some species are very large, such as brown and polar bears, while others are smaller, such as sloth bears.

In the Canidae family, nearly 470 million dogs are kept as pets worldwide.[4]

They are differentiated from other mammalian groups by their long nose, pointed ears, and bushy tail. Most members of this family are terrestrial.

Miacids are considered the first true mammals. They lived during the Paleocene and Eocene Epoch (about 65-33 million years ago).[5]

While all mammals are very distant relatives, as they evolved from the same ancestors, they’re not considered related.

All modern carnivorous mammals are believed to derive from this ancient creature.

Can Dogs and Bears Mate?

Bears and dogs can’t mate. This is due to their different genetic makeup. They have different chromosome counts and hence can’t produce offspring.

Bears are not related to dogs, they are part of the Ursidae family, which is separate from Canidae. They’ve evolved to have different traits, including chromosome count.

Crossbreeding, or interbreeding, between the two species, is simply not possible.

Related: Are bears afraid of dogs?

The dog’s breed that looks the most like bears include:

The Chow Chow is a breed of dog that is known for having a very thick coat of fur. They are also known for their blue-black tongue.

This breed is small to medium-sized and is considered to be a primitive dog breed.

They are considered to be a bear-like breed of dog, as they have the characteristic thick fur and bear-like facial structure.

Siberian Samoyeds are considered to be one of the most endearing dog breeds[7]. They are adorable with furry white coats that grow thick fur along their backs and fluffy hairlines.

While Samoyeds, as with all dogs, are related to wolves, they look a bit like bears due to their facial structure.

The Newfoundland is a large dog breed that is known for its resemblance to bears. They are one of the heaviest dog breeds and have thick fur coats. They are often used as working dogs, due to their strength and size.

Newfoundlands are gentle and loyal dogs, and very protective of their family and home. They are excellent swimmers and are known for their rescue abilities.[8]

The Tibetan Mastiff is a breed of dog that originally lived with the nomads of Tibet, most often as a guard dog. It is native to the Himalayans and is considered one of the oldest dog breeds in the world.

These large dogs are used as guard dogs and are known for their loyalty and bravery. They are also known for their resemblance to bears, which is why they are sometimes called “Mastiffs from the Land of the Snows.”

The Akita is a breed of dog that is considered to look like a bear. They are part of the Spitz family (also includes the  Siberian Husky) and are considered loyal and protective dogs.

They are also considered to be one of the most expensive breeds of dogs to purchase.

No, bears are not related to dogs. Dogs are part of the Canidae family, whereas bears are related to the Ursidae family. While all mammals are very distant relatives, as they evolved from the same ancestors, they’re not considered related.

Bears and dogs share a few physical similarities, such as fur and four legs, but their behavioral traits are vastly different.

Dogs are domesticated animals that serve as companions for humans, while bears are wild creatures that can be dangerous when threatened.