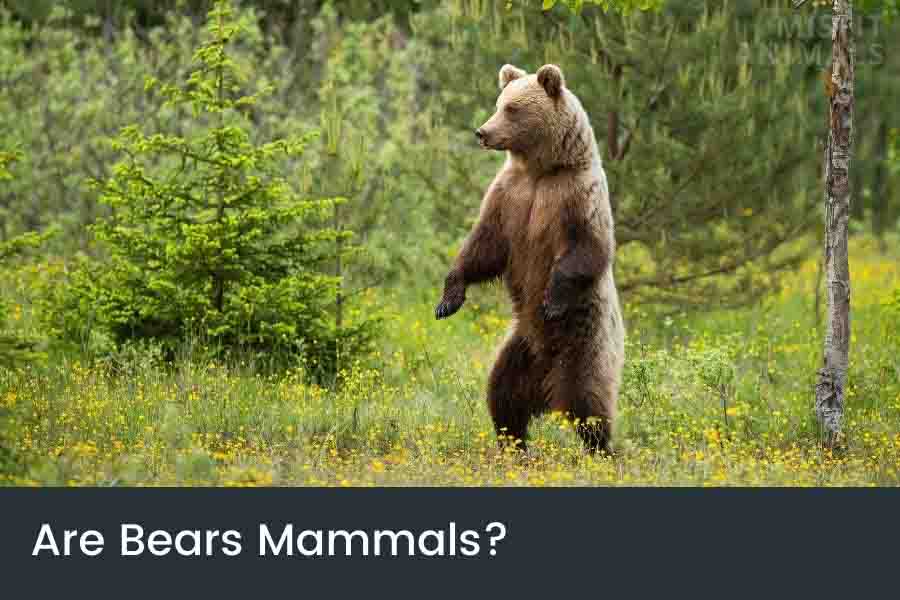 Bears are mammals. This means they share characteristics with other mammals, which include being warm-blooded, having fur, being born alive, having mammary glands to produce milk for their young, and having complex brains.

Bears are members of the Ursidae family. But are they mammals?

Mammals all share common characteristics, all of which differentiate them from other animals, such as invertebrates, birds, of amphibians.

In this article, we’ll talk about what makes an animal a mammal, whether bears are mammals, and why that is.

What Makes an Animal a Mammal?

Mammals are vertebrates, with a bony backbone. The spinal cord connects the brain to the rest of the body via this backbone. This distinguishes mammals from invertebrates like insects. They also have hair, typically seen as fur.

Mammals are also equipped with mammary glands which secrete milk to nurture the offspring. Mammals have several nipples, which are used to feed younglings.

There are some exceptions to the above criteria, as some mammals lay eggs, or give birth to offspring that aren’t fully developed.[1]

Mammalian brains are substantially more complicated than other species’. Higher degrees of thought, emotion, and communication are possible. A good example is dogs. These can be trained to execute many difficult tasks.

Yes, bears are mammals. They fulfill the criteria for one and are hence members of the Mammalia class, a sub-group of vertebrates.

The Ursidae family is made up of eight species of bears that live all over the world.[1] They are classified as mammals because they are warm-blooded, hairy animals that are born alive and nurse their young with mammary glands.

Bears also have complex brains which give them advanced cognitive abilities compared to other animals in their class.

For these reasons, bears can be considered true mammals.

Are Bears Vertebrates or Invertebrates?

This backbone is what allows mammals to function on land, as it’s the internal, central support structure.

Why Are Bears Mammals?

Bears are mammals because they fulfill the criteria of one: they’re warm-blooded, have fur, are born alive, have mammary glands, and have complex brains.

Bears are purebred mammals, and here’s why:

Bears are born alive and typically weigh around two pounds at birth. They are blind and deaf when they are born, but can see and hear within a few weeks.

Cubs stay with their mother for two years and learn how to hunt and survive on their own.

Bears Have a Backbone

The backbone is what gives vertebrates their characteristic spinal curvature and allows them to move around more easily. It also serves as a protective casing for the spinal cord.

Bears are able to use their backbone to stand up on their hind legs and reach food or objects high up in trees. They are also able to run quickly and grapple with prey thanks to their powerful backs.

The mammary glands are organs that produce milk. This milk is used to feed younglings when they can’t eat solid foods.

In female bears, the mammary glands are located on the chest between the front legs. Male bears do not have mammary glands, but they do have nipples, as other male mammals.

The word “mammal” describes a taxonomic group that includes all four-legged animals that are born after gestating in a uterus and suckle their young with milk from their mammary glands (teats) – including whales and elephants.

Bears are warm-blooded mammals. It means that their internal temperature remains relatively stable regardless of the temperature of their environment.

Mammals are warm-blooded because they generate their own heat internally. This is in contrast to cold-blooded creatures, who rely on their environment to regulate their body temperature.

One reason bears are so well adapted to life in cold climates is that they are warm-blooded. Their fur also helps to keep them warm, as it works as insulation.

Bears are able to generate enough heat internally to stay warm even when they’re not active.

Bears Have a Four-Chambered Heart

The heart of a bear is similar to that of a human[3]. Bears have a four-chambered heart, which means that the blood is divided into four chambers.

This helps to keep the blood flowing efficiently and prevents the heart from becoming overworked.

The four chambers of a bears’ heart are:

This advanced and efficient heart serves multiple purposes, such as allowing them to hibernate.

Bears are able to hibernate because their heart rate can slow down significantly. Their heart rate can drop as low as eight beats per minute. This helps to conserve energy and prevents the bear from starving to death during its winter slumber.

When a bear wakes up from hibernation, its heart rate speeds back up to normal levels within minutes.

Not all bears hibernate. The polar bear migrates.

Bears, like all mammals, have hair, or in the case of bears, fur.

They have fur all over their bodies, except for the lips and soles of their feet. The fur of bears is typically black or brown, but can also be yellow, white, or red-ish.

While all bears are hairy, the length and thickness of their fur vary depending on the species and the climate in which they live.

Bears are incredibly intelligent. Their brains are much larger than dogs’ brains and are similar in complexity to human brains.[4]

These large animals are even smarter than humans in some areas, such as navigation.

Due to their intelligence, bears have been used in circuses to perform tricks, much like elephants.

The brains of bears are divided into two parts, the cerebrum, and the cerebellum. The cerebrum is responsible for higher functions such as thinking, reasoning, and emotions. The cerebellum controls movement and balance.

Related: Can bears be domesticated?

Why Are Polar Bears Considered to Be Marine Mammals?

Polar bears are considered to be marine mammals because they spend most of their lives on the sea ice of the Arctic Ocean. They also depend on the ocean for their food and habitat.

Marine mammals are animals that live in the ocean or depend on the ocean for survival.

The polar bear is the world’s largest land predator, but it also spends a lot of time at sea. They are great swimmers and can stay underwater for up to two minutes.

Polar bears don’t exclusively live on ice though, as they migrate during winter. They may cross into forests or other ice-free territories.

The Arctic Ocean is a harsh environment, and the sea ice is constantly changing. That’s why polar bears are so adaptable and can live in such a wide range of habitats. They are able to move quickly across the ice by using their strong front legs, and they have special furry feet that help them grip the ice.

Bears are mammals because they are warm-blooded, have fur, give live births, are equipped with mammary glands, and have complex brains.

As with all mammals, bears are vertebrates, meaning they have a backbone. They’re part of the Ursidae family, a group of animals containing eight species of bears.