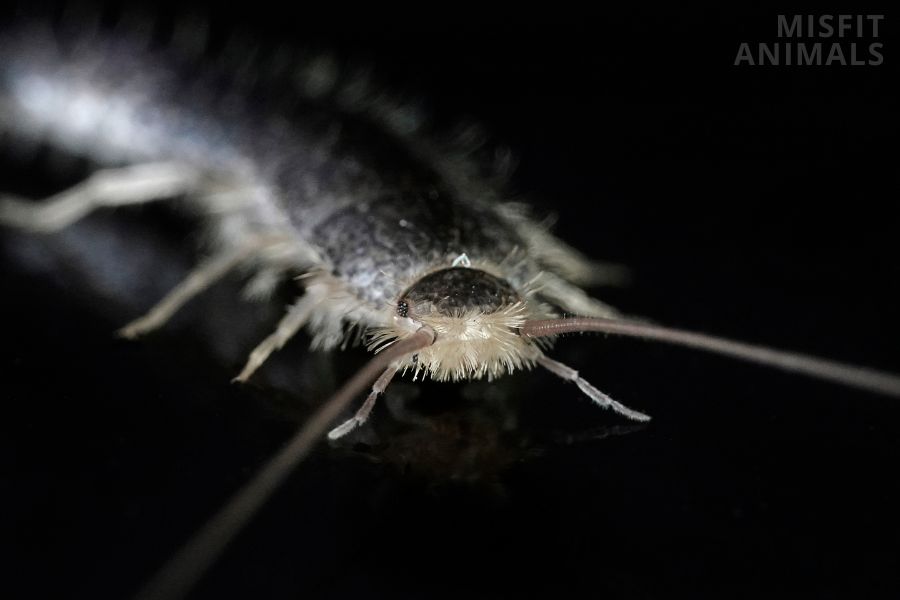 Invertebrates are animals without vertebrae (a backbone). Examples of invertebrates include ants, bees, flies, silverfish, hornets, moths, and squids.

Did you know that there are more than one million types of invertebrates?

While most people consider common invertebrates pests (such as ants and other bugs), they play a vital role in our ecosystems.

In this article, we’ll take a look at 11 examples of common invertebrates.

Invertebrates are animals that do not have a backbone or spinal column. This group includes more than 95% of all species on earth. Invertebrates are found in nearly every habitat on Earth, from the coldest Arctic tundra to the hottest deserts.

Clione limacina, also called sea angels or naked sea butterflies, is a tiny creature that lives in the Arctic and North Atlantic oceans[1]. These small aquatic animals measure a few centimeters in length and have transparent bodies.

Sea angels are predators and hunt for other small invertebrates to eat.

While they look delicate, sea angels are actually quite tough creatures. They can withstand frigid temperatures and high pressures and are known to survive for short periods of time out of water.

The Goliath birdeater (Theraphosa blondi) is the largest spider in the world. It is native to the rainforests of Venezuela. They have giant legs as they grow to have a leg span of up to 12 inches (30 cm).

Despite the name, the Goliath birdeater doesn’t actually eat birds. Its diet consists mostly of insects, although it has been known to eat small mammals and reptiles.

The Goliath birdeater is dangerous. It has large fangs that can pierce human skin, and its venom is strong enough to cause serious health problems.

The Daphnia pulex is a small freshwater crustacean found all over the world. It measures a few millimeters in length and has a translucent body.

Despite its small size, Daphnia pulex is an important part of the food chain. It is often eaten by fish, amphibians, and reptiles.

In turn, Daphnia pulex eats algae and other microscopic organisms.

Daphnia pulex is also a useful creature for scientists. It has been used in studies of evolution, ecology, and water quality.

The housefly (Musca domestica) is a fly belonging to the family Muscidae. An adult housefly is about 8-10 mm long and has a wingspan of about 20 mm. It is reddish brown in color with four dark stripes on its thorax.[2]

This is a cosmopolitan fly, meaning that it is found in nearly every part of the world.

The housefly is attracted to decaying organic matter, such as garbage or manure. It is also attracted to sweet substances, such as fruit or sugar.

Female houseflies lay up to 500 eggs in their lifetime. The eggs are laid in batches of about 75-100.

Roly-Polys are one of the most common invertebrates found in North America. They are also known as pillbugs or woodlice. These creatures are crustaceans, related to shrimp and crabs.

Roly-Polys have segmented bodies covered in a hard exoskeleton. They range in color from gray to brown and can grow to be about 1/2 inch long. They have seven pairs of legs and two sets of antennae.

As nocturnal animals, they are most active at night. During the day, they hide in moist places such as under logs or rocks, or in your garden.

Silverfish are small, wingless insects that are common household pests[3]. Their name comes from their silvery-grey color and fish-like appearance, which is due to their long, slender bodies and three long tail fins.

Silverfish are harmless to humans and do not carry diseases. But, they are a nuisance as they feed on books, paper, clothing, and tapestries.

They are especially fond of starchy foods, such as flour and cereals.

They are nocturnal creatures that prefer dark, damp places to hide during the day. They are often found in basements, attics, and crawl spaces.

Silverfish can live for up to two years without food, but they die if they are exposed to light for more than a few minutes.

If you think you have silverfish in your home, the best way to get rid of them is to contact a professional pest control company. They can help you identify the source of the infestation and eliminate the silverfish with traps or insecticides.

The colossal squid is one of the world’s largest invertebrates and is one of the few animals that rival the size of great whales. It is believed to grow to a length of up to 43 feet (13 meters), and weigh up to 2 tons (1.8 metric tons).

This gargantuan creature is found in the deep waters of the Southern Ocean, and is rarely seen by humans. Until recently, the only evidence of its existence came from the occasional carcass that was washed up on shore or caught in the nets of deep-sea fishermen.

In recent years, there have been a few sightings of live colossal squids. There are even a few videos of these giant creatures in their natural habitat.

This has given scientists a rare glimpse into the life of this elusive animal.

The Asian Hornet is an invasive species native to Asia. It was first discovered in France in 2004 and has since then spread to other parts of Europe. The Asian Hornet poses a serious threat to honeybees and other pollinators.

In Europe, the Asian Hornet has caused the decline of honeybee populations.

The Asian Hornet is a large insect, measuring up to 3 cm in length. It is dark brown or black in color, with yellow stripes on its abdomen.

These hornets have long stingers used to inject venom into prey. The venom of the Asian Hornet is dangerous to humans and can cause anaphylactic shock.

The Asian Hornet is a predator of honeybees and other pollinators. It is believed that they are responsible for the decline of honeybee populations in Europe. The Asian Hornet preys on bees by injecting them with venom, paralyzing the bee.

The blue glaucus is a small, blue sea slug. It is native to the coasts of Australia and South Africa. The blue glaucus feeds on other marine creatures, including jellyfish. They have a venomous sting that is dangerous to humans.

The blue glaucus is small, measuring up to 3 cm in length. It is blue in color with silver stripes on its body. It has a long, thin tongue that it uses to sting and paralyze its prey.

As a predator, this sea slug preys on other marine creatures, including jellyfish. The blue glaucus stings its prey with its venomous tongue, which paralyzes the prey. It then eats the paralyzed prey.

The domestic silk moth is a species of moth native to Asia. It was introduced to Europe in the 18th century and has since spread to other parts of the world. The moth is used in the production of silk.

The domestic silk moth is a medium-sized moth with a wingspan of up to 7 cm. It is white or pale yellow in color with brown markings on its wings. It lays its eggs on the leaves of plants, whereafter the larvae spin cocoons made of silk.

The cocoons are used to make silk fabric.

This is an important species in the production of silk. Silk is a fine, strong, and smooth fabric that is used in a variety of products, including clothing and upholstery.

The domestication of the silk moth has allowed humans to produce silk on a large scale.

The cicada killer wasp is a large, predatory wasp. It is native to North America and is found in wooded areas.

The wasp preys on cicadas, paralyzing them with its sting. It then drags the cicada to its nest, where the cicada is used as food for the wasp larva.

The cicada killer wasp is a large insect, measuring up to 5 cm in length. It is black or dark brown in color with yellow markings on its abdomen.

It has a long stinger that it uses to inject venom into its prey. The venom of the cicada killer wasp is dangerous to humans and can cause anaphylactic shock.

Cicada killers are solitary predators and do not form colonies.

What Is the Largest Invertebrate?

Coconut crabs are nocturnal animals that live in burrows. They are large, terrestrial crabs native to the Indian and Pacific Oceans and get their name from their ability to crack coconuts open with their claws.

During the day, they stay hidden in their burrows to avoid the heat and sunlight. At night, they come out to feed on coconuts, fruits, and leaves.

Coconut crabs are not dangerous to humans but can be aggressive if they feel threatened.

What Is the Smallest Invertebrate?

The smallest invertebrate is the rotifer. Rotifers are small, aquatic animals found in freshwater environments. They get their name from the wheel-like structure on their head, which they use to move through the water. Rotifers can be as small as 50um (0.05 mm) and can only be seen with a microscope.

Rotifers are members of the phylum Rotifera, which includes over 2,000 species. They are found in freshwater environments all over the world.

Rotifers are filter feeders and eat algae, bacteria, and small protozoans. Most rotifers reproduce asexually but some species can reproduce sexually.

The rotifer is the smallest type of invertebrate. They measure between 50-500um (0.05–0.5 mm) in length and can only be seen with a microscope.

Are All Invertebrates Small?

No, all invertebrates are not small. Invertebrates come in a wide range of sizes, from the tiny rotifer to the giant colossal squid.

The vast majority of invertebrates are small animals, but there are some that are quite large.

The largest type of terrestrial invertebrate is the coconut crab, which can grow up to 1 m in length and weigh up to 4 kg.

How Many Invertebrates Are There?

Invertebrates make up the majority of all animal species in the world. There are more than 30 phyla, but the exact number of species is still unknown. 1.25 million animal species have been described by humans, but there could be 30 million or more that still have yet to be discovered. There are only about 60,000 vertebrates.