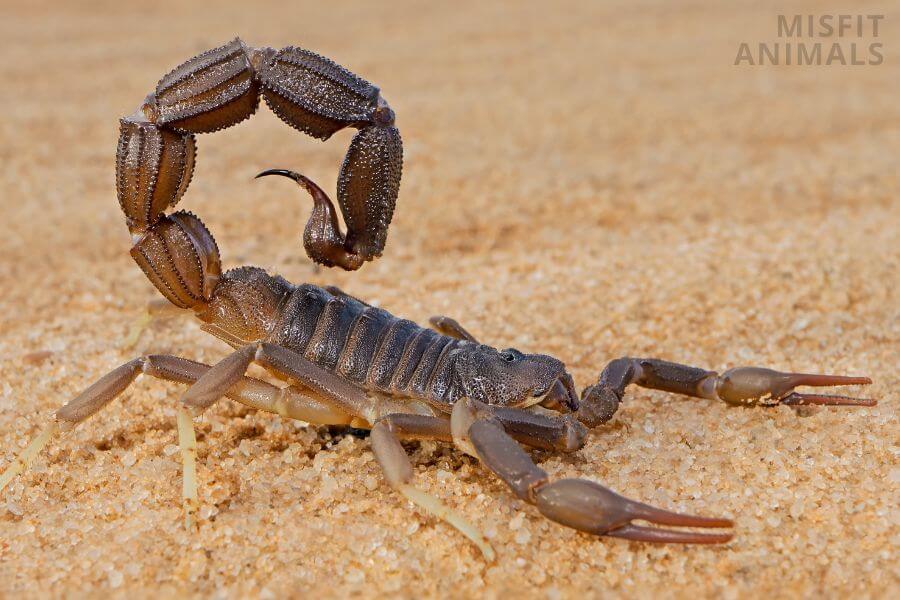 The desert is an unforgiving environment. Due to extreme heat and the natural dryness of deserts, few animals are fit to live there. But insects are different.

Many insects have adapted to the dry habitat, evolving to survive on low amounts of water and with high temperatures.

From ants to fascinating spiders, these bugs are hardy and know how to survive.

There are a variety of insects that call the desert their home. Some are harmless, while others can pose a threat to humans and animals alike.

Here is a list of some of the most common desert insects:

Fire ants are a type of ant native to South America. They have been introduced to many other parts of the world, including the United States, where they are now considered an invasive species.

They get their name from their ability to inflict painful bites and stings. They are also major agricultural pests, as they can destroy crops and harm livestock.

Fire ants are very aggressive, and attack anything that they perceive to be a threat, including humans. When they bite, they also inject a venomous sting that can cause intense pain and swelling.

In some cases, the reaction to the venom can be severe enough to cause anaphylactic shock.

One interesting type of wasp is the digger wasp.

Digger wasps build their nests by digging burrows in the ground. The female wasp then lays her eggs in the burrow, and when they hatch, the larvae feed on insects that the female has caught and brought to them.

Another interesting type of wasp is the cuckoo wasp. Cuckoo wasps are parasitic, meaning that they lay their eggs in the nests of other wasps.

When the cuckoo wasp larvae hatch, they eat the eggs and larvae of the other wasp species.

Killer bees are a species of bee that is known for their aggressive behavior. These bees are native to Africa and were first brought to the Americas in the 1950s[1].

Killer Bees have since spread throughout the southern United States, as well as parts of Central and South America.

They are more aggressive than other types of bees and attack both humans and animals if they feel threatened. These bees are also more likely to swarm than other bee species.

A swarm of killer bees can be extremely dangerous, as the bees will attack anything that comes into their path.

The viceroy butterfly is a North American butterfly found in the desert that resembles the monarch butterfly. It is orange with black stripes and has a wingspan of about 3 inches.

The butterfly gets its name from its resemblance to the monarch butterfly. The two are often confused with one another, but there are some key differences between the two species: The viceroy butterfly is smaller than the monarch and has a different pattern of black stripes on its wings.

The viceroy butterfly is found in deserts and is most common in the southwestern United States.

Yucca Moth is a species of desert insect found in North America. It is considered to be a keystone species in the desert ecosystem.

The Yucca Moth pollinates the Yucca plant, which is its only source of food[2].

The relationship between the Yucca Moth and the Yucca plant is an example of mutualism, where both species benefit from the interaction.

The moth is a small, brownish-grey insect with a wingspan of about 1.5 centimeters. It has a long proboscis (an extended mouthpart) that it uses to reach the nectar inside the Yucca flower.

Scorpions are a type of arachnid and are closely related to spiders and ticks. There are about 1,500 species of scorpions and they can be found on every continent except Antarctica.

Scorpions are nocturnal predators and hunt at night for insects, spiders, centipedes, and other small animals.

While they are generally harmless to humans, there are a few species that can deliver a painful sting.

The most dangerous scorpion is the Indian red scorpion, which is found in India and Pakistan. This species can cause serious illness or death in humans.

Scorpions are interesting creatures and have many unique features. For example, some species of scorpion can glow in the dark! This is called bioluminescence and is caused by a chemical reaction in the scorpion’s body.

The blister beetle is a type of beetle found in arid or desert climates. These insects are often brightly colored, and they get their name from the fact that they can secrete a substance that causes blisters on the skin.

While most blister beetles are not dangerous to humans, some species can be harmful if ingested.

Blister beetles are interesting insects because of their ability to secrete a substance that causes blisters. This substance is called cantharidin, and it is a poison that can be harmful to humans if ingested.

Recent studies show that blister beetles have antiparasitic properties that can be useful to humans.[3]

Despite their potential to cause harm, blister beetles are not generally considered to be dangerous insects. In most cases, they are more of a nuisance than anything else.

If you do come into contact with a blister beetle, it is important to wash the area with soap and water to remove the cantharidin and avoid any further irritation.

Both species are nocturnal hunters that prefer to live in burrows, which they line with silk.

Mohave Desert Spiders are generally shy and non-aggressive, but they will bite if they feel threatened. Their venom is not considered dangerous to humans, but it can cause pain and swelling.

If you are bitten by a Mohave Desert Spider, it is important to seek medical attention immediately.

These spiders are not commonly seen, but they play an important role in the desert ecosystem. They help control populations of insects and other small animals that can damage plants and spread diseases.

Insects of the Sonoran Deserts

The Sonoran Desert is home to a wide variety of insects. The most common ones include beetles, bees, and centipedes.

Many different species of ants call the Sonoran Desert home. Some of these ants are beneficial, as they help to control other pests.

Other species are harmful, as they bite and sting humans and animals.

The Sonoran Desert is also home to numerous different species of beetles. Some of these beetles are advantageous because they consume other pests that can harm crops.

Some beetle species, on the other hand, are dangerous as they eat plant leaves and can seriously harm crops.

The Sonoran Desert is a haven for bees. Some of these bees are helpful because they aid in plant pollination while others sting both people and animals, making them dangerous.

Centipedes are also present in this Sonoran desert. Since they consume other insects that can harm crops, some of these centipedes are helpful.

Insects are incredibly adaptable creatures and have many different strategies for surviving in dry, hot desert conditions. While some insects sought out moisture and stayed near water sources, others developed camouflage to blend in with their surroundings or become nocturnal to avoid the heat of the day.

Insects play an important role in desert ecosystems, providing food for other animals and helping to break down organic matter.

Are There Flies in the Desert?

Yes, there are flies in the desert. The Sonoran Desert is home to a wide variety of insects, including many different species of flies. Some of these flies are beneficial, while others can be quite harmful.

Yes, some species of flies can carry disease. One of the most well-known diseases that flies can carry is typhoid fever. Typhoid fever is a serious illness that can be deadly if not treated properly. flies can also carry other diseases, such as cholera, dysentery, and salmonella.

What Is the Most Common Desert Bug?

There is no definitive answer to this question, as different insects are more common in different parts of the world. In general, however, some of the most common desert bugs include ants, beetles, and bees.