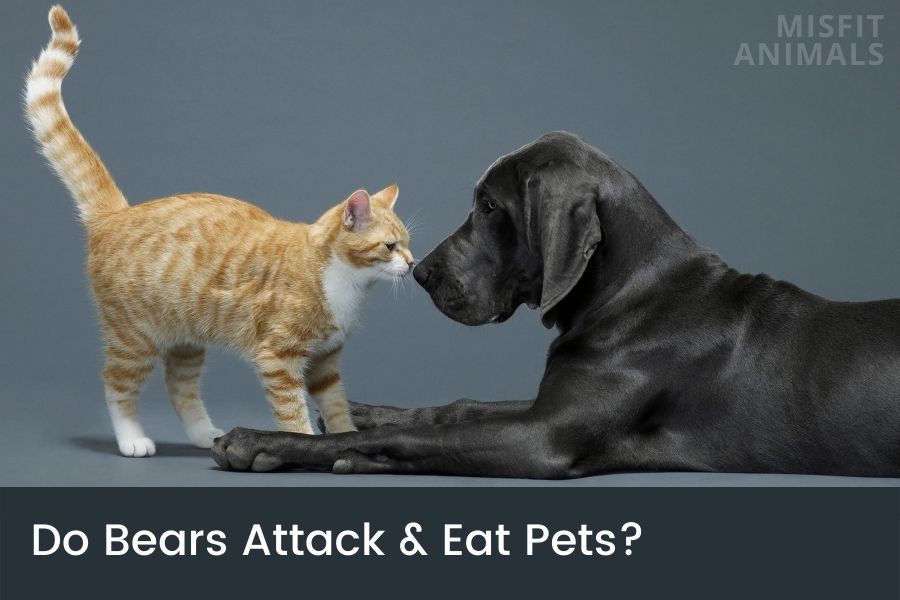 Do bears attack and eat pets? Yes, bears do occasionally eat dogs and cats, however, it’s rare. This typically happens when a pet runs off into the woods, or when a pet runs away from its owner during a hike.

Bears are omnivores, which means that they eat both plants and animals.

While their diet is mostly made up of plants, a part of it is made up of small animals.

But what about pets? Do bears eat cats and dogs?

In this article, we’ll take a look at the threat bears pose to pets, if they do so, and what pets bears will eat.

Are Bears Dangerous to Pets?

Bears are dangerous animals, but they tend to avoid confrontation. If your animal seems threatening, or if the bear is hungry, it is indeed dangerous.

Bears are dangerous to pets, but there are ways to protect your beloved companion:

Although bears are very large and do hunt animals for food, they tend to keep away from humans. They’re not fond of confrontation and will keep to themselves most of the time.

However, bears will attack pets if they’re threatened, disturbed, or very hungry.[1]

Hence, keeping your distance from bears is always the best course of action.

Bears do attack pets, but it rarely happens. This typically happens when pets run off into the woods, or run away from their owner when hiking.

Bears rarely eat pets, as they typically don’t encounter pets very often. They will attack unleashed cats and dogs in the forests or on hiking paths, but they don’t hunt for pets.

The majority of bear assaults occur when a pet is off-leash and runs into the woods, where a bear is present.

Bears are omnivores, and only a smaller part of their diet is made up of meat from small animals, such as pets (this varies depending on bear species).

Bears are not typically known to hunt and eat pets, such as cats or dogs. However, if a pet is left unsupervised in an area where bears live, there is always the chance of an attack.

In most cases, when a bear does kill and eat a pet, it’s because the animal ran off into the woods. Bears are attracted to movement, so if they see a pet running around, they may give chase.

Yes, bears do eat cats. While this is true, it very rarely happens, as bears have trouble catching them. Cats can usually outsmart and escape bears as they’re fast and very agile.

Bears are omnivores, which means that they eat both meat and plants. Hence, in theory, they do eat cats. In reality, they don’t do so very often.

However, because bears are so large, it can be difficult for them to catch these types of prey. They also tend to target other prey, such as fish, insects, rabbits, deer, or elk.

While brown bears are omnivores and do eat small animals, the likelihood of them eating a pet cat is slim.

Most pet cats stay close to their homes, as opposed to running off into the woods. However, if a pet cat does run away, there is a small chance that a brown bear may eat it.

Brown bears are not typically known to attack cats, but it is always important to be aware of their surroundings and take precautions when hiking or camping in bear country.

These bears have more difficulty when trying to catch cats, as they aren’t as nimble or agile.

Black bears do not typically eat cats[2]. However, black bears are opportunistic feeders. They eat whatever they can find and kill – which includes pets like cats.

While black bears are small, they’re among the faster bear species, and they’re very agile as well. They can easily climb trees and do so while hunting.

Hence, your cat might not be able to escape a black bear.

Bears will most likely not eat dogs. They have an innate fear of dogs. When that’s said, it does happen that bears attack, kill, and eat dogs or other dog-like animals such as wolves.

Bears have a natural fear of canines, such as wolves, coyotes, and dogs, as they’ve learned that these dog-like animals may steal their cubs.

However, it has been observed that bears will kill dogs, after their initial scare.

This usually only happens if the bear is desperate for food, and typically prey on pets that have wandered too far away from their home or when people are hiking with their dogs.

Studies show that bear attacks are more likely to happen if you’re hiking with your dog.[3]

Yes, brown bears may eat dogs, but it is rare. Brown bears prefer to eat fish, ungulates, insects, or small animals. They tend to target herbivores, as these are less threatening and easier to take down.

However, a dog may be attacked if it’s posing a threat to the bear, or its cubs.

Brown bears are large animals, and wouldn’t have much difficulty in taking down a dog.

In most cases, black bears will not eat dogs. They are omnivorous creatures, but the majority of their diet consists of plants and insects. Small mammals only make up a tiny percentage of their overall diet.[3]

If a black bear happens to come across a dog, it is likely that the dog chases the bear, scaring it away.

It’s important to note that there have been cases where black bears have successfully hunted and killed dogs.

When Do Bears Attack Dogs?

Bears typically attack dogs when they’re being chased by them. Black bears are less inclined to do so, but grizzlies can be triggered to attack by barking dogs.

Pets are typically attacked by bears in two different scenarios:

Dogs are more inclined to act aggressively towards bears. They’re more territorial and will bark, or even chase bears.

Related: Are Bears Afraid of Dogs?

There are many wild predators, or scavengers, that prey on pets:

Bears do eat cats and dogs, but it is rare. Pets running off into the woods or away from their owners are more likely to be attacked by bears than those that stay close.

Bears are omnivores, so they will eat whatever is available to them. However, small animals only make up a small part of their diet. If you are hiking or camping with your pet, keep them close to avoid any potential attacks.