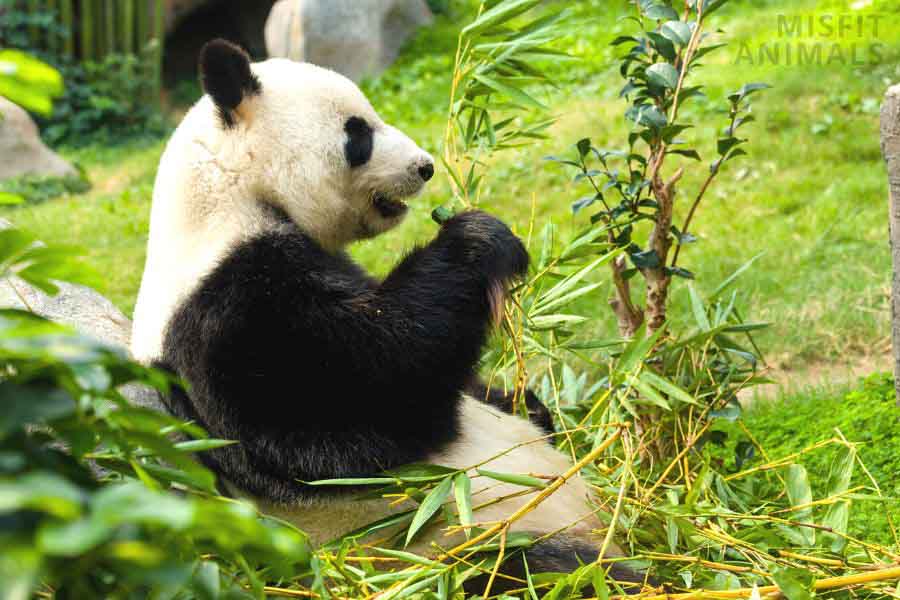 Bamboo is a popular choice for many gardeners as it’s easy to grow and it’s relatively drought-tolerant. But did you know that many animals also enjoy eating bamboo?

In this post, we’ll take a look at some of the animals that eat bamboo and learn a little bit more about them. We’ll also discuss the benefits of bamboo for both animals and humans. So if you’re curious about this interesting plant, read on!

Bamboos are a group of evergreen, perennial flowering plants that belong to the grass family Poaceae. There are over 1,400 species of bamboo, which grow in tropical and subtropical regions around the world.

Many animals love to eat bamboo, and here is a list of some of the most notable ones:

The bamboo lemur is a type of primate native to the island of Madagascar. These animals are some of the only primates that have evolved to eat bamboo as their primary food source.

Bamboo lemurs are small in size, with adults typically weighing between two and four pounds. They have reddish-brown fur, and their tails are long and bushy.

These small lemurs live in groups of up to 20 individuals, and they spend most of their time in the trees. They are active during the day, and they sleep in nests at night.

Bamboo lemurs are threatened by habitat loss and deforestation[1]. The primary threat to them is the destruction of their forest habitat.

At the same time, they are hunted for food by people living in Madagascar. But, they are protected by law, and there are several conservation efforts underway to help protect them.

The red panda (Ailurus fulgens), also called the lesser panda, the red bear-cat, and the red cat-bear is a mammal native to the eastern Himalayas and southwestern China. It has reddish-brown fur, a long, shaggy tail, and a waddling gait due to its shorter front legs.

The panda is largely arboreal, and feeds mainly on bamboo, but also eats eggs, birds, and insects.

The red panda is an endangered species, threatened by habitat loss and poaching. It is estimated that there are fewer than 10,000 red pandas left in the wild.

These animals are known for their reddish-brown coat and long, shaggy tail. It has a waddling gait due to its shorter front legs. The red panda is an arboreal animal, meaning it spends most of its time in trees.

The giant panda, also known as the panda bear or simply the panda, is a bear native to south central China. It is easily recognized by its large, distinctive black patches around its eyes, over its ears, and across its round body.

Though it belongs to the order Carnivora, the giant panda’s diet is 99% bamboo.

Giant pandas in the wild occasionally eat other grasses, wild tubers, or even meat in the form of birds, rodents, or carrion. In captivity and care, they receive honey, eggs, fish, yams, shrub leaves, oranges, or bananas along with specially prepared food.

The giant panda lives in a few mountain ranges in central China, mainly in Sichuan province, but also in neighboring Shaanxi and Gansu.

As a result of farming, deforestation, and other development, the giant panda has been driven out of the lowland areas where it once lived.

These gorillas live in small family groups, and they spend most of their time eating and resting. Mountain gorillas are an endangered species, and there are only about 800 of them left in the wild.

Mountain gorillas are incredibly strong and weigh up to 500 pounds. They have thick dark fur that keeps them warm in the cold mountain climate.

While they are large and strong, mountain gorillas are very shy animals, and they are not aggressive[2]. However, they will fight if they feel threatened.

Mountain gorillas live in small family groups, and each group has a dominant male. The males are responsible for protecting the group from predators.

Chimpanzees are one of the many animals that eat bamboo.They are found in Africa and Asia. There are two types of chimpanzees:

Chimpanzees are omnivores, which means that they eat both plants and animals. Bamboo is a significant part of their diet. They eat the leaves, stems, and shoots of bamboo. Bamboo is a good source of nutrients for chimpanzees as it is high in fiber and low in fat.

These animals use their hands and feet to climb trees and walk on all fours. They are the only primates that can walk and run on all fours.

Elephants are large mammals of the family Elephantidae. They are the only extant members of the order Proboscidea, which contains six families, including mastodons. Elephants are scattered throughout sub-Saharan Africa, South Asia, and Southeast Asia.

Meanwhile, Indian elephants weigh between 2 and 4 tonnes (2.2 and 4.4 short tons), with males in the higher weight range.

The bamboo rat is a species of rodent in the family Cricetidae. The bamboo rat is a large, stocky rodent with short legs and a long body. They are found in woodlands and forests in China, Laos, Vietnam, and Thailand. They are nocturnal animals and live in small family groups.

They build their nests out of bamboo and other materials and line them with grasses and leaves[3]. As good climbers and jumpers (they can jump up to 6 feet from the ground), they are agile and difficult to catch.

Bamboo rats eat mainly bamboo, but they will also eat insects, roots, and other vegetables. They use their long front teeth to gnaw through the tough bamboo shoots.

The bamboo rat is not considered to be a threatened species, but its numbers are declining due to habitat loss.

The Golden Monkey is a species of monkey that is found in the mountainous regions of central and southwestern China. These monkeys are recognized by their golden-yellow fur, which covers their entire body. The hair on their head is usually a lighter shade of gold, and they have a dark stripe running down their back.

Golden Monkeys are social animals and live in troops of up to 40 individuals. These troops are made up of both males and females and are led by a dominant male.

The monkeys spend most of their time in the trees, where they build nests out of leaves and branches.

The diet of the Golden Monkey consists primarily of bamboo. They will also eat other types of vegetation, fruits, and insects. During the winter months, when bamboo is less available, they have been known to eat bark and twigs.

What Is the Most Popular Bamboo Eating Animal?

The most well-known bamboo-eating animal is the giant panda. Native to China, the giant panda is the largest panda. They are easily recognizable by their black and white fur, and their large size (an adult can weigh up to 250 pounds).

Giant pandas spend most of their time eating bamboo. They consume up to 12 kilograms of bamboo each day. They have a specially adapted digestive system that allows them to digest this tough plant material.

What Is The Biggest Animal that Eats Bamboo?

The biggest animal that eats bamboo is the Asian elephant. These massive creatures weigh up to two hundred sixty-five thousand pounds and stand up to seven feet tall at the shoulder.

The Asian elephant is massive with trunks that can grasp and strip whole branches from trees, which they then use to eat the leaves.

Elephants consume an average of two hundred fifty pounds of bamboo each day.

What Is The Smallest Animal that Eats Bamboo?

This is a timid creature that is active at night. It lives in forests and feeds on bamboo shoots and leaves. It is also known to eat other plants, insects, and small animals.

The bamboo rat is an important part of the diet of many predators, including snakes, owls, and cats.

No, sloths do not eat bamboo. Sloths live in South America where there is no naturally-growing bamboo. Although it could grow there, it’s not endemic in the area. Therefore, it’s not part of the sloth’s diet. Discuss the plants that sloths eat.