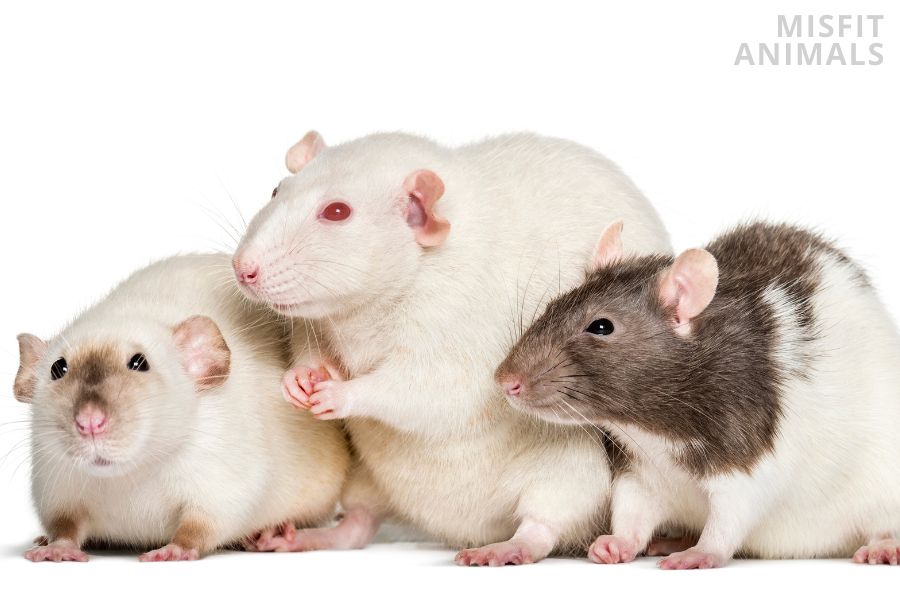 There are seven types of pet rats and nine color varieties. There are over 40 recognized pet rat colors in total.

Rats are generally seen as pests. They’re among the most unpopular rodents out there.

Despite this, the domestic rat has managed to make its way into the world of pets. There are domestic rat breeders and even beauty contests.

Domestic rats are cute, clean, and inexpensive. But which one should you go for?

Pet rats come in a variety of types, breeds, and colors, satisfying even the most demanding tastes.

There are even hairless rats for people with allergies and rats without tails.

In this article, you will learn what a fancy rat is, the most common types of pet rats, and learn about their color varieties.

What Is a Fancy Rat?

Fancy rats are domesticated rats. They are also called pet rats. Breeders reproduce these rats to keep and sell as pets.

The term “fancy rat” is another way of saying “pet rat” or “domesticated rat”. Rats were caught in the wild and bred for generations. They were eventually domesticated and were given the name “fancy rats”.

The name fancy comes from:

Rats have only become popular pets in the last century, even though they have lived with humans for thousands of years.

There are two species of rats that have lived with humans throughout history:

The brown rat (or wild rat) is one of the most widespread and familiar species in the world. Contrary to its name, it is not always brown.[3]

The rats kept as pets today come from the domestication of the brown rat. The first evidence of domestication dates from the Edo period (1603-1868, Japan)[4].

In other words, domestic rats (Rattus norvegicus domestica) are a subspecies of the wild rat.

Pet rats act differently depending on how many generations have passed since they were domesticated.

Pet rats are smaller and more delicate than wild ones, with sharper faces and bigger ears. Fancy rats also have longer tails. Domestic rats can live up to three years, while wild rats often live one year.

Pet rats are small mammals that live around 2-3 years. They come in many colors and coat types. Fancy rats are very intelligent animals that can learn to use the litter box or do tricks.

Fancy rats are small mammals weighing about 500 grams. They have an average body length of 8-10 inches, without the tail. The tail is at least as long as the body. They have prominent incisors that grow continuously, so it is important to provide them with hard food or toys to chew on. Healthy rats have bright eyes and shiny fur.

Males are larger than females and can weigh up to one kilogram (~ 2 lbs.).

Pet rats come in many different colors and coat types. There are varieties without hair or a tail, with curly, coarse, or silky fur.

They are sociable and very intelligent animals that can learn some basic commands:

Pet rats come in a great variety of colors, sizes, and features.

But, there are only seven rat variants recognized by The American Fancy Rat & Mouse Association (AFRMA).

Here are the seven species considered as the standards:

Related: How Much Is A Rat?

The standard breed rat is very similar to the wild brown rat. It has a short coat with a smooth appearance. Males have longer hair than females. Their hair can also feel coarser and greasier to the touch.

Their ears are of normal size, located at the top of the head. The length of the tail is almost equal to the size of their bodies.

Standard rats do not need a special diet and do not have unusual nutritional requirements.

Rex rats have curly or wavy fur. You can find the Rex variety in many other species, including cats (Cornish Rex cats).

As Rex rats age, their fur can fall off some areas of their body, leading to bald spots.

Double Rex rats also fall into this category. Their fur is even curlier, and they can have problems with their eyelashes and whiskers due to excessive curling.

The name Manx comes from the tailless cat, Manx. Manx rats do not have a tail due to a genetic mutation. For this reason, their hind end appears rounder. Some rats have a stub, while other specimens are completely tailless.

The body of tailless rats is thicker than other types of domestic rats.

As rats use their tails for both balance and thermoregulation, tailless rats need extra care. They can have balance and personal care problems due to their lack of tail.

Sphynx rats are named after the hairless cat breed known as Sphynx. This type of rat is completely hairless or can have small tufts of hair on its face. Some specimens also lack whiskers or eyebrows.

These rats have smaller bodies than other types of domestic rats and are considered suitable for people allergic to animal hair.

They need more warmth to live comfortably and not get sick because they do not have fur.

Satin rats have soft and satin (shiny) fur, hence their name. Their hair is longer than that of standard and Rex rats.

This type of rat is usually smaller, with a narrower body[6]. Satin rats have a darker, deeper color than other types. As they age, the darker colors are shinier and the light ones yellower.

The name “Dumbo” comes from the elephant in the Disney cartoon, Dumbo. These rats have large, round ears, placed lower (on the side) than other types of rats.

Their whole head is larger, with a smaller jaw than other types. The recessive genes that produce these changes are the result of a natural mutation.

Dumbo rats have the same average lifespan (2-3 years) as a standard breed.

The name for the Bristle coat rat comes from their coarse and wiry fur. Their coat feels like a wire brush. They also have short hair.

When they are young, Bristle coat rats can have wavy hair like Rex rats. The hair straightens as the rats get older.

These rats have either straight whiskers or curly tips like Satin rats. Bristle coat rats come in all varieties of colors or markings.

Each type of rat is grouped into six sections by color and body markings:[7]

These breeds are named after their color.  Many of them are not recognized as individual breeds by kennel clubs.

There are nine other variants, in addition to the seven standard breeds:

Some owners are interested in variants named after their coat color. They are distinct enough to be considered separate breeds from the seven standard breeds.

Topaz rats have a rich golden color and very dark ruby eyes that look black from a distance. For rats to be classified as Topaz rats, they need to have a silver belly.

Lilac agouti rats are also known as lynx. Agouti refers to the fur of the rat, recognized by its light and dark bands. Lilac agouti has a combination of lilac and blue stripes.

For rats to be recognized as Lilac Agouti rats, they need gray legs and a silver belly, with dark ruby or black eyes.

Cinnamon Pearl rats have three bands of color: cream, blue, and orange. They also have silver guard hairs. These colors give an overall golden appearance.

Cinnamon pearl and pearl varieties have been bred since the late 1970s.

The Silver Fawn rat is considered an attractive variety. It has a fawn color with silver guard hairs. It is historically known as Argenté. These rats have pink or dark red eyes.

Powder Blue rats are a very light shade of pale dove blue with a pale silver belly. They have black or ruby eyes. For rats to be recognized as powder blue rats, the color has to be uniform without spots.

Quicksilver rats are a darker platinum color with a bright blue-gray look and light ruby eyes. Their legs are gray.

Russian pearl rats are also known as dove pearl or Russian cinnamon pearl rats. Their coat is silver with cream undertones, and their hair has a silver tip. They have gray legs and black eyes.

British Blue rats have a dark blue color. They have similar features to standard rats. For rats to be recognized as rats of the British blue variety, their color has to be steel blue, with no discoloration. They also need white fingers.

Burmese rats are toffee-colored with seal points and black eyes.

What Is the Best Type of Pet Rat?

Dumbo is the best type of pet rat because they are very docile and friendly. They are also the most popular variety of rats.

Rats are very sociable animals that like to spend time with their owners or family members. They like to sit on your shoulder, lap, or on the couch. Rats love contact with their owners, so it is advisable to socialize with your rat whenever you have time. In this way, you will create a special connection with your pet rat.

Can I Have Just One Rat?

It is recommended to adopt at least two rats. Rats are animals that live in a colony. If they are alone and you do not socialize with them, they may often become ill or suffer from depression because they feel alone. Rats like to do things together, such as sleeping, playing, and grooming. A rat with a playmate is happier than if it is alone.

What Is the Difference Between a Fancy Rat and a Rat?

Fancy rats live 2-3 years, while wild rats live for about a year. These two types of rats are also distinguished by their physical appearance. Fancy rats are smaller, have a longer tail, a sharper face, and larger ears, unlike Rattus norvegicus.