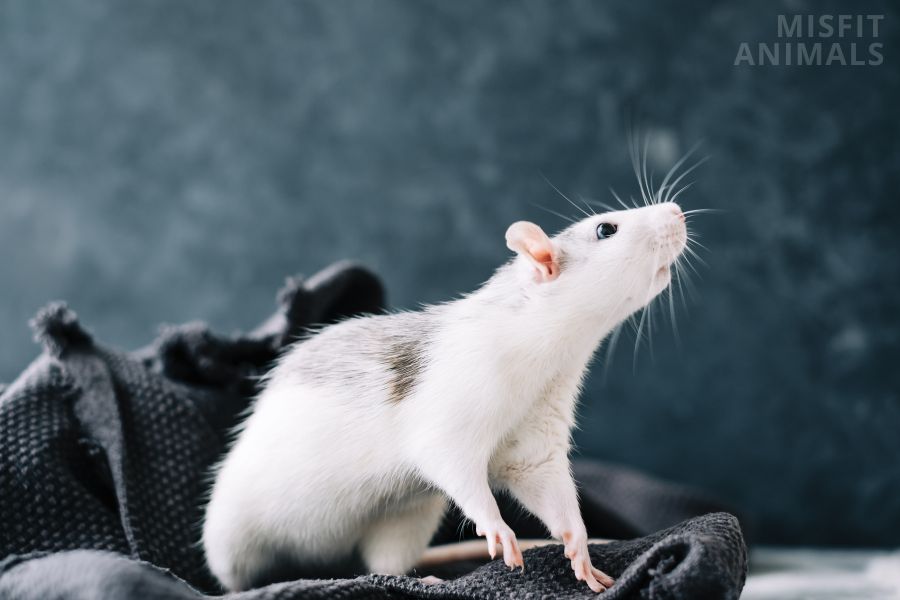 Rats live for two years on average. Common wild rats (brown and black rats) live one year on average. They have a shorter lifespan due to the increased dangers in the wild. Pet rats usually live for 2-3 years, but there are cases where they’ve reached seven years. They have longer lifespans because they are safe from predators and have food at their disposal.

Since ancient times, rats have lived near human settlements. They cause problems to crops and spread diseases.

Rats disgust many people, while others keep them as pets and enjoy spending time in their company.

There are over 60 species of rats around the world. These rodents know how to adapt and survive in the harshest of conditions.

In this article, you will learn how long rats live, the average lifespan of rats, how long pet rats live, what are the most common causes of death for rats, and more.

Rats have four stages of development: newborn, preadolescent, young adult, and adult. Their physical traits change depending on the stage. Rats stop growing when they are seven months old.

It all starts with birth. Female rats give birth to 8-14 rats per litter[1]. Gestation lasts about three weeks, and females can become pregnant again as little as two days after giving birth.

If you keep rats as pets, it is recommended to let the female rest for at least two months until the next pregnancy. Pregnancy, delivery, and nursing require a lot of energy.

The life expectancy of a wild rat is about 1-1.6 years. Many die due to predators and diseases. Pet rats can live up to three years because they are less exposed to danger.

Rats go through four life stages in their life cycle:

At birth, rat pups are completely dependent on their mother. Newborn rats are hairless, with short tails, blind, and deaf. They cannot walk until after a week.

The ear canals open after 2-3 days. Seven days after birth, their eyes open too. In the first two weeks of life, rats only feed and sleep. This is to make sure they gain weight and grow.

Their fur begins to show after about two weeks.

At three weeks old, they wean. From here on out, rat pups are left to fend for themselves. Some rats continue to nurse if they aren’t separated from their mother after these three weeks.

Rats need the company of their siblings, especially if they are raised as pets when they are preadolescents. Wild rats typically leave the nest after their mother weaned them.

Young adult rats are active and friendly, especially if they are kept as pets. In this stage, they enjoy exploring, learning new things, and spending time with their owner.

Rats are considered adults around the age of 2-3 months when their vital systems have reached maturity.[3]

At the age of seven months, rats stop growing. From the age of one, rats start getting old.

Adult rats are friendly and easy to train, although they can start to be less active after one year old. After this age, health problems such as arthritis can occur.

How Long Do Rats Live

Wild rats face predators everywhere. Because of this, they typically live for up to two years. Most rats die or are killed before the age of one.

Pet rats live on an average for three years but they can also reach 6-7 years in exceptional cases. This is because they are cared for, are safe from predators, and have access to food all the time.

How Long Do Rats Live in the Wild?

Most wild rats live for about one year but can reach up to two years[5]. They have a short lifespan due to the dangers of the wild nature, such as predators, lack of food, accidents, etc.

How Long Do Rats Live as Pets?

Pet rats have other living conditions than wild rats, which help extend their life by at least one year. They usually live for two to three years, but there are cases when they can live longer.

There are over 60 species of rats around the globe. They can live up to 1-2 years or more (13 years), depending on their body size. The larger the species, the longer it lives. Common wild rats and pet rats have an average lifespan of about 1.5-2 years.

How Old Are Rats in Human Years?

Rats have a much faster life pace compared to humans. They become sexually mature and can mate from an early age. One month of a rat’s life is said to be equivalent to 2.5 human years.[12]

How To Tell If Your Pet Rat Is Getting Old

Rats age similar to humans and other mammals. When they get old, their bodies get weaker, locomotor problems occur, they lose weight, and their hair starts to fall out in different areas.

Rats begin the aging process at the age of one year.

Here are some signs of aging in rats:

Illness in rats can be difficult to detect. They tend to hide any weakness because they are predators.

Most Common Cause of Death for Rats

The most common problems that lead to death in wild rats are:

Pet rats aren’t at risk from natural predators or a lack of food. The factors that affect your rat’s life are diseases.

Here are the most common diseases that affect pet rats:

Pet rats suffer from tumors. They range from lipomas (benign tumors) to malignant tumors, such as mammary cancer. Breast cancer occurs in females, especially in those who have given birth.

Contact your veterinarian if you feel any lumps under the skin of your pet rat.

Rats with mammary tumors live for about two years.

Respiratory diseases are common in pet rats. They have a sensitive respiratory system. Many rats also develop lung infections due to stress.

Respiratory diseases are caused by:

Certain bacteria that cause respiratory infections (e.g. Mycoplasma pulmonis) can be passed from the mother to her offspring at birth. This bacterium persists throughout life. Some rats develop the infections, while others remain carriers.[13]

Contact your veterinarian if your rat sneezes frequently, has a red liquid coming from its eyes or nose, or coughs.

Rats with respiratory infections die young if not treated in time. In some cases, they die in a year, even with treatment.

Rats’ teeth grow continuously. It’s a good idea to check if they are blunt regularly. They can grow into your rat’s lip or head and cause an infection.

Signs that your rat is not grinding its teeth and they are constantly growing are:

Contact your veterinarian if you notice these symptoms in your rat.

Rats with dental problems need their teeth trimmed once every two weeks or to get them extracted. If left untreated, rats can die of starvation or infection.

Tips for Giving Your Pet Rat a Long Life

There are many things you can do to prolong your pet rat’s life. Start by feeding your pet a varied and complete diet. Handle it often so it gets used to you and take it out of its cage to move around.

Here is what you can do to prolong your rat’s life: