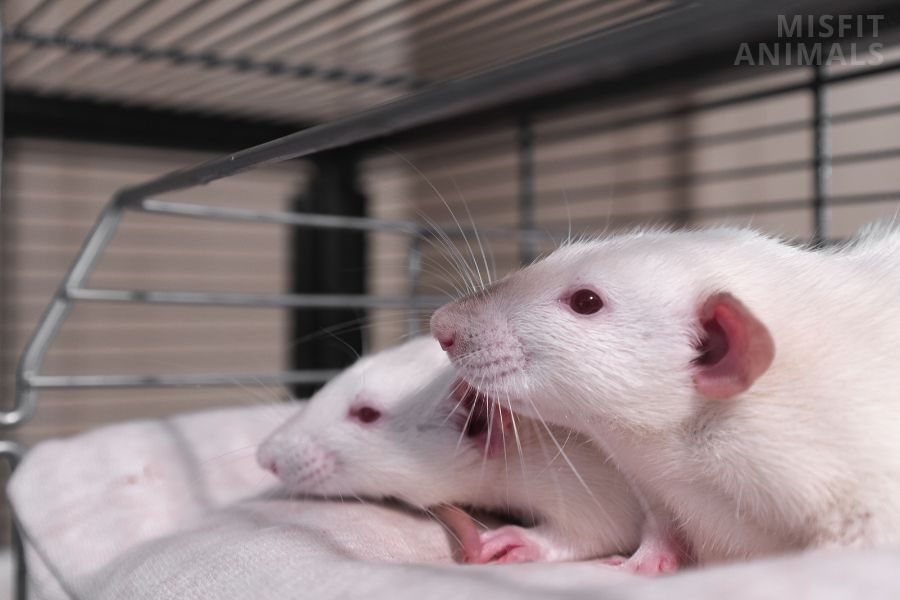 Baby rats’ can be sexed after they are five weeks old. Adult males are larger than females and have square bodies. Males weigh up to 800 grams, while females weigh 500 grams. Females are more active and curious, while males are more affectionate.

If you are planning to have more than one pet rat, you should know the difference between males and females.

Sexing rats is easy when they reach the age of five weeks. This is when the female and male anatomy differentiates.

When they become adults, males are larger and more loving than females.

In this article, we’ll cover the main differences between male and female rats, how to sex these rodents, and more.

The main differences between male and female rats are their genitals and size. Males are larger than females, and they have different reproductive organs. Males usually do not have nipples but have mammary glands.

It is very difficult to tell the difference between a male and a female rat when they are born, if not impossible.

Here are some anatomical features of the genitals of each sex in rats:

In some cases, only one testicle drops in males. This is called cryptorchidism.

Some rats have both genitals (male and female reproductive organs) and are called hermaphrodites. These cases are very rare.

One of the best ways to sex baby rats is to look at their nipples. Female rats have 12 nipples (two rows of six nipples each), while males usually don’t develop them. But both sexes have mammary glands.

The nipples are most visible in the first few weeks of life when baby rats are hairless.

Why Do Male Rats Not Have Nipples?

Male rats do not have nipples, because of a delayed release of hormones. Androgen hormones (testosterone) are responsible for differentiating nipples in rats[3]. The release of this hormone in males occurs before the development of the nipples and as a result, the nipples no longer develop.[4]

Both sexes have mammary glands though.

Rats, along with horses and mice, are the only non-monotreme mammals where the male does not have nipples.

Monotreme animals are those that have a single orifice for the rectum, urinary tract, and genitals.

The male differences between male and female rats’ appearance are the shape and size of their bodies. Male rats are larger, with a square body, and weigh up to 800 grams. Rat females are thinner, athletic, and weigh about 500 grams.

There are many species of rats, each one different from the others. Some are wild, and others are kept as pets. Pet rats are usually larger than wild or laboratory rats.

Some rats exceed this weight and reach almost a kilogram (~2 lbs.)

Males also have a boxy body shape, while females are athletic and thin.

They have longer and more rounded heads, whereas females have pointy noses. Males are also more robust and have firmer flesh and thicker tails.

Related: How Big Do Rats Get?

Male rats are more loving and docile than females, while also showing more aggressive tendencies. Rat females are active and can be aggressive, especially if they are handled improperly.

These two characterizations are truer for pet rats than for wild rats. Rats in the wild behave according to the environment they live in.

Male pet rats can be as active as females if you supply them with toys, stairs, wheels, tunnels, etc.

They will never be as agile as females as they are almost twice as big. But they can be just as curious and eager to explore.

Male rats react more positively and faster to human handling than females. Female rats bite faster if handled improperly. They are also more active and agitated when handled compared to males, who prefer to sit still and cuddle.

Male rats are generally calm and relaxed, while females quickly become agitated and irritable, especially when they are in heat. Many pet rat females do not show any heat signs, so they are more relaxed.

Male rats are considered more consistent when it comes to training. They are easier to work with, most likely due to their docile nature.

Basic care for male and female rats is mostly the same with minor differences. The main differences are diet and diseases. Male rats should not eat citrus fruits as these can induce kidney disease. Female rats are more prone to mammary tumors.

Basic care for rats, regardless of their sex, is similar. Both sexes need the following:

Gender differences occur when it comes to three things:

Both sexes of rats can consume almost the same things. The only difference is that male rats should not consume citrus fruits (grapefruit, oranges, etc.).

Citrus fruits contain a substance (D-limonene) that can cause nephrotoxicity.[5]

Male rats’ protein intake should also be limited. They can become obese and have skin diseases, including hair loss. Protein-rich diets also increase the risk of kidney cancer in male rats.

Rats are prone to breast, kidney, or pituitary tumors. If you sterilize your pet rats when they are young, the chance of cancer decreases.

Otherwise, rats are predisposed to the same diseases regardless of gender. The most common disease in rats is respiratory infections with Mycoplasma pulmonis.[6]

Their odor is another factor that differentiates males from females. Rats do not smell too pleasant, and males have a more pungent odor compared to females.

Some say female rats smell like popcorn, while males like Doritos. Male rats secrete oils on the back into their fur. These oils are seen as an orange film on the backs of mature male rats. It is also called buck grease.

When they want to mark their territory, rats release a liquid that smells of grape soda on the sides of the abdomen. They rub this liquid against the sides of walls, furniture, floors, cage, etc., to imprint this particular scent.

Pet rats usually become territorial when moving to a new environment. In this case, they will mark their territory, resulting in a smelly cage in the initial period.

Both sexes of rats are territorial, but this behavior is more pronounced in males.

Rats also mark their territory with urine, including objects and people. The urine of males smells stronger than that of females.

How to Sex Baby Rats

Sexing rat pups is difficult to do if they are younger than five weeks. At five weeks, the rats’ genitals develop, and the difference between the sexes becomes obvious. If you want to differentiate newborn rats, you can look at their nipples.

Baby rats are called pups or kittens. They have some gender differences, but they are not always obvious.

The handling of newborn rats is generally contraindicated as they are stressful.

To sex them, gently turn the pup over to expose its abdomen and groin area. You can best see the nipples when the baby rats do not yet have hair. Their hair grows around 2-3 weeks of age.

Females have nipples while males, in most cases, don’t have any.

Another difference is in the size of the space between the anus and the genitals. This area fully develops at the age of five weeks. Instead of well-differentiated genitals, newborn rats have small lumps.

In females, this distance is smaller than in males.

Male testicles can also appear around the age of three weeks. To be sure of your rats’ gender, wait until they are five weeks old.

You should not keep males and females together after the age of six weeks. This is when they begin to mate.

Are Female Rats Friendlier Than Males?

Males are friendlier and more affectionate than females, but it does depend on how you raise and interact with them. Both sexes can be as friendly. Male rats are not as active as females but they are just as curious and eager to explore.

How Can You Tell a Male From a Female Rat?

You can sometimes tell males and female rats apart by looking for nipples. Females have 12 nipples, while most males don’t have any. You can also look at the size of the space between the anus and the genital organ. This space is shorter for females. In adult rats, the difference is obvious. Males have larger testicles in proportion to the rest of the body.

Neither sex smells particularly nice, but the scent of males can be stronger than that of females. Male rats are more territorial and leave urine everywhere or release fluid from the sides of the abdomen. The smell of urine of male rats is stronger. They do this to mark their territory, including objects and people.