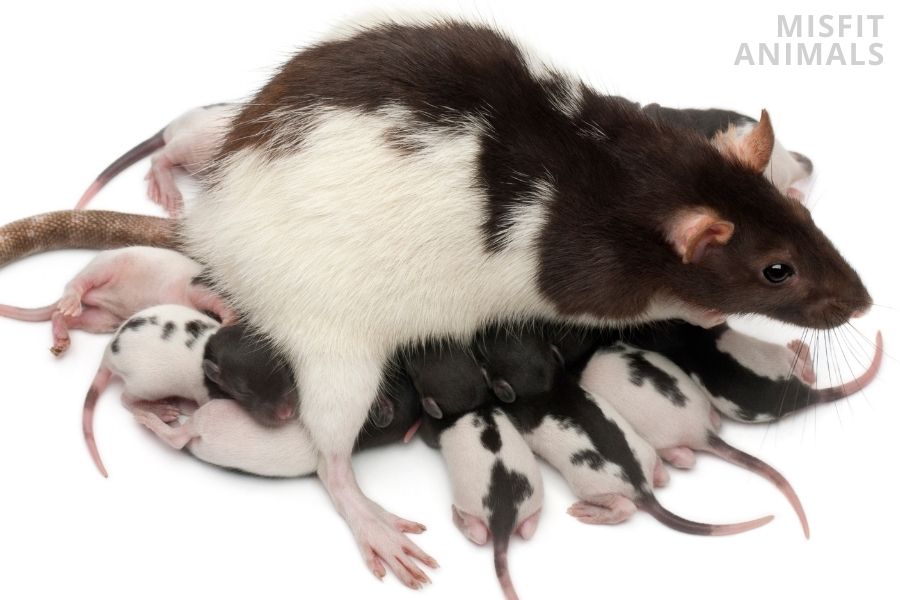 Rats can start reproducing between 6-12 weeks of age. Gestation lasts an average of 21 days, and the pregnant female can be detected starting at two weeks. Females gain weight, their abdomen enlarges, and their breasts develop. Before giving birth, pregnant females build their nests. Rats can have up to 18 pups in a single birth.

Rats reach sexual maturity at a young age. They have a short breeding time and give birth to large litter sizes.

That’s why they can infest a home fast.

These rodents prefer to build their nest in hidden and isolated places so their offspring are protected. This includes places such as under the floor, behind furniture or walls, or inside pipes.

In this article, you will learn how rats mate, how many babies they have, how to tell if a rat is pregnant, and more.

How Do Rats Mate?

Rats mate like most mammals. When the female is ready for mating, she bends her back, stiffens her legs, and lifts her tail and head. The male mounts the female and climbs off several times until completion.

According to researchers, male rats form hierarchies. They compete for water, food, and females. Strong rats become dominant, and the others subordinate.[1]

The rats will mate with the female in heat in the order of their hierarchical position.

Male rats approach the female from behind. The behavior of the female rat at the time of mating involves the following:

Through this position, the female allows the male to mate with her.

Copulation in rats is short and multiple and lasts a fraction of a second until the male releases sperm.

Both sexes emit a 50 kHz mating call[2]. These sounds trigger mating actions in both males and females rats.

Researchers believe rats make these sounds to prevent other males from mating with the same female.

How Often Do Rats Mate?

Rats are extremely fertile. Males can start breeding from they are 6-10 weeks old, while females reach sexual maturity when they are 8-12 weeks old.[3]

Female rats are in heat every five days. Heat starts in the evening and lasts all night.

The fertility of rats lasts until the age of 18-24 months[4] when they enter menopause. Rats can become pregnant during menopause, but pregnancy may not be healthy.

If rats have mated successfully, the average gestation time is 21-23 days. They can become pregnant again two days after giving birth.[5

In other words, female rats can become pregnant every month, all year round. They usually get pregnant about 3-6 times a year.[6]

The pregnancy rate begins to decline when they turn one year old.[7]

What You Need to Know if You Keep Rats as Pets

If you keep rats, follow these guidelines depending on whether you want to breed them or not:

How Many Babies Do Rats Have?

Rats can have up to 18-20 babies in a single litter. The average litter size is 5-10. Female rats can reproduce again 48 hours after giving birth. In three years, rats can give birth to up to half a billion babies under ideal conditions.

Rats multiply often, and they give birth to a lot of baby rats. Gestation is short, and the female is ready to mate two days after giving birth.

These rodents can give birth to up to 20 pups at a time, though the average is 5-10.

Baby rats are born without fur and with their eyes closed. About 2-3 weeks after birth, their fur grows, their eyes open, and they are ready to leave the nest.

In ideal environmental conditions, where there are no predators and plenty of food, a pair of rats can make 482,508,800 babies in three years. To this number are added the babies of their offspring for several generations.

Rats have so many pups because they have so many natural predators and at least one must survive to perpetuate the species.

How Can You Tell if a Rat Is Pregnant?

A pregnant rat gains weight and the abdomen enlarges after two weeks of gestation. As in all mammals, the pregnant female undergoes changes in her body as the fetus develops.

Until the pregnancy reaches two weeks, no signs can be noticed.

After two weeks of pregnancy, you can see the following:[8]

As the time of birth approaches, you will be able to see the babies moving inside the female’s abdomen.

What Are the Signs of a Rat Infestation?

Signs of a rat infestation include gnaw marks on furniture, sounds coming from the walls or floor, rat feces, chewed cables or pipes, etc. When you see the rat in flesh and bones, it means that an infestation is taking place.

Most of the time, rats build their nest in hidden places:

Because rats multiply so fast and often, an infestation can get quickly out of hand. Be aware of the following signs to spot a rat infestation early:

Rats breed quickly and often, being very fertile. They become sexually mature at 5-8 weeks of age, and females enter menopause around the age of two. Rats give birth to up to 20 babies at a time. The average litter size is closer to 5-10 pups.

Under ideal environmental conditions, a pair of rats can produce up to almost half a billion pups.

If you live in areas populated by rats, try not to leave food or garbage outside because it attracts them. Once they have found a place that provides them with food, rats will build a nest (or more) and start breeding.

How Long Are Rats Pregnant?

Gestation in rats lasts about three weeks (21-23 days). Signs of pregnancy begin to appear from two weeks – the female gains weight, the abdomen enlarges, and the breasts get bigger. Baby rats are born hairless and with their eyes closed.