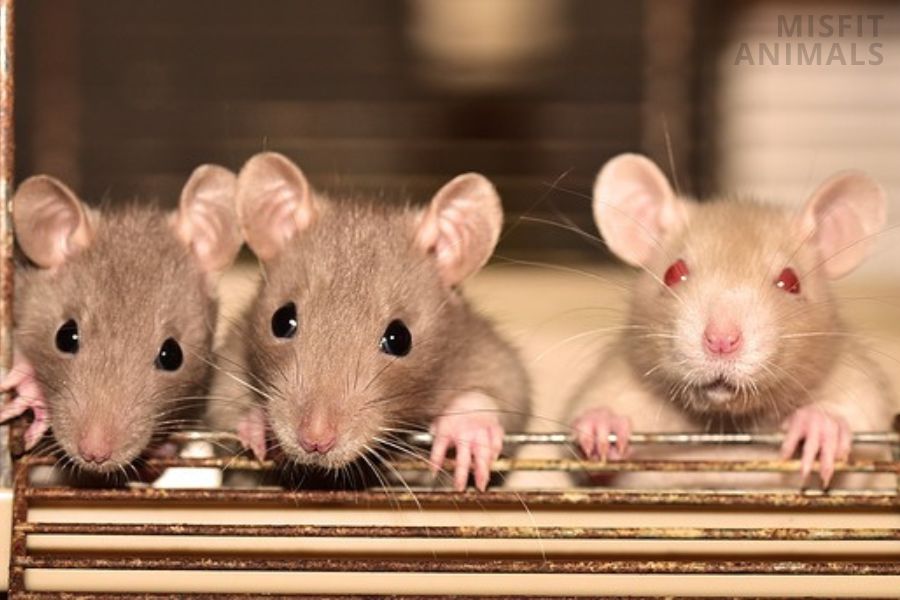 Rats make sounds, regardless of age. They squeak, chirp, and hiss, depending on their condition and emotional state. They also make sounds when they run across your ceiling or chew.

If you hear rattling, banging, scratching, or rummaging through the walls at night, you most likely have rats and not ghosts.

Rats, like any other animal, have certain means of communication, including making sounds. They squeak, chirp, and hiss, depending on the state they are in or the activity they are doing.

They also make noise when chewing cables or insulation in the walls. These noises are often louder than their vocalizations.

Most of the time, rats’ sounds are so high that the human ear can’t hear them.

In this article, you will learn what sounds rats make, and how you can listen for rats in your home.

Rats make many different sounds. These are usually too high for the human ear to perceive. They make sounds from the minute they are born.

The sounds rats make differ[1] depending on a couple of factors:

While they have many kinds of vocalizations, they are high pitched.

Their sounds are between 2-100 kHz. As humans can hear sounds between 2-20 kHz, we can’t hear every noise coming from rats.

In other words, most sounds rats make are in the ultrasonic spectrum. Many people even think rats are mute because they can’t hear their vocalizations.

Rats communicate with their sounds, passing information between each other:

Researchers found out that rats laugh when they are tickled.[2]

Studies show that sounds above 50 kHz indicate a rat in a positive state. These sounds also have a communicative purpose. Rats emit 50 kHz sounds when they interact with other rats, reproduce, or play.

When they emit sounds of 22 kHz, they are in aversive situations and feel aggressive.[3]

What Sound Do Rats Make?

The most common sounds rats make are squeaks, chirps, and hisses. Squeaking or hissing means a rat is afraid or hurt and in pain. They also make noises when they run up walls or across the attic. These are not made by the rats’ vocal cords but by their claws or teeth.

Rats are nocturnal animals that come out of hiding at night, so you won’t hear the sounds they make during the day.

At night, rats become active and start looking for food, mating, or looking for a new place to build their nest. Depending on the activity, rats make different sounds.

Rats use different sounds to communicate based on emotion and environmental factors:

They also make noises when they run across a room, run up walls, climb, or chew.

Baby rats love to play, and they vocalize more than adult rats.

They communicate with their siblings through high and elaborate sounds. Humans cannot perceive the sounds baby rats make.

Baby rats also vocalize when they are hungry.

Rats make a lot of sounds, including squeaks, chirps, hisses, scratching, scurrying, chewing, and bruxism sounds. Depending on the situation, they have different meanings.

Rats produce sounds in two ways: through the vocal cords (vocalize) and through movement.

Rats make short and long squeaks, depending on their state:

Prolonged vocalization can also be a sign of disease.

Chirping is another form of communication. It has several meanings:

While chirping can indicate happiness, most chirping indicates that they are ready to mate and are looking for a partner.[4]

Hissing is a way for rats to express negative feelings:

Rats also hiss as a warning sign or when they are annoyed.

Rats produce sounds not only with their vocal cords but also with their claws. If you have a rat infestation, you can hear them digging or scratching through the walls at night.

Scratching sounds also indicate that a rat is climbing or crawling.

Rats scratch to get to food sources, collect nesting material, or when they are moving from one area to another.

Rats move very quickly even though they have short legs. When there are many in one place, it is possible to hear scurrying sounds.

These sounds usually occur when rats run from one side of the room to another.

Rats’ incisors grow continuously from the time they are born until they die. In order not to have teeth issues, rats must constantly chew on various things to grind and keep them at a suitable size.

Chewing sounds occur when rats grind their teeth, chew on things, or when they eat.

Rats also use their teeth to chew their way through your house as they can chew through concrete or insulation materials.

The sound of bruxism in rats is similar to the purring of a cat.

It is said that when pet rats grind their teeth, they are happy.

Sounds of Rats in Walls

Rats make noise when they run inside of walls. The most common noises are scratching, as their claws scrape on the inside of your wall. They also chew or gnaw to get through.

You will be able to hear scratching and chewing sounds from rats in the walls. You will most likely also hear scurrying sounds when they run through the attic.

Rats chew the wires and insulation materials when they are inside the walls.

Other sounds you can hear through the walls are squeaks and chirps, but these are usually too high-pitched for the human ear.

Respiratory infections in rats are among the most common diseases because they have a small and sensitive respiratory system.

Respiratory infections are usually caused by one of the following reasons:

Mycoplasma pulmonis is a bacterium that causes respiratory infections and can be passed from mother to babies at birth. This bacterium persists throughout life, and some rats are only carriers; they do not develop the disease.[5]

When a rat has a respiratory infection, it will whiz, sneeze a lot, and breathe heavily. Infected rats can also sound like they are rattling or honking.[6]

Rats in the attic make scratching, chewing, and scurrying sounds. These rodents are nocturnal animals, which means they are active at night. You will mostly hear these sounds at night and in the same area of the attic because they prefer to follow the same tracks.

Why Do Rats Scream at Night?

Rats scream (or squeal) at night for many reasons. This happens when they meet an enemy, a foreign rat that is not part of their colony, or when they are injured. Rats can also scream when fighting another rat.

Do Rats Make a Chirping Noise?

Yes, rats make chirping sounds. These rodents chirp when they are happy, but most often when they are ready to mate. Rats can also squeak and hiss. They make each sound according to their emotional state and environmental factors.