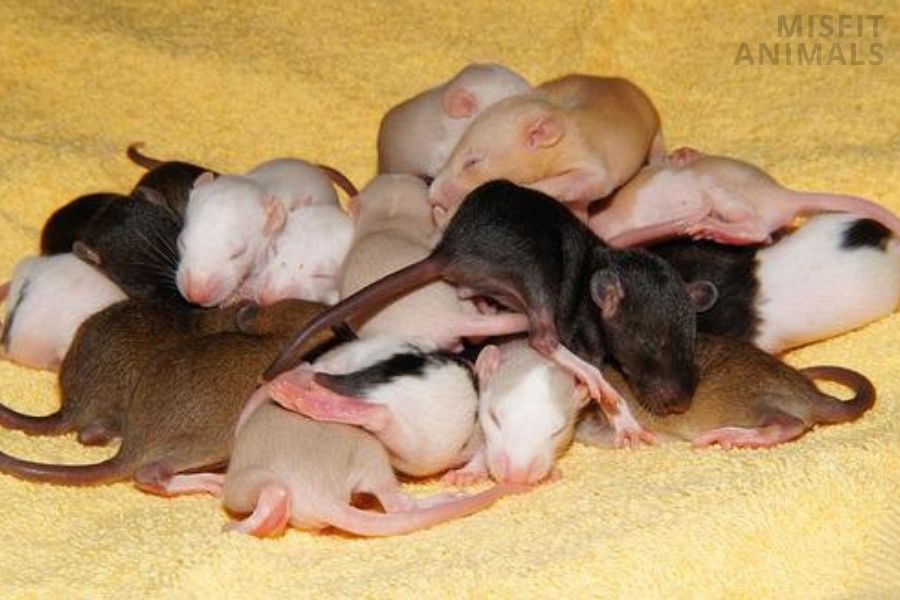 Rats do not lay eggs. They are viviparous animals like most mammals, meaning they give birth to live young. Rats can give birth to 20 live pups at a time and have several litters a year (usually six).

Rats are mammals. One of the characteristics of mammals is that they give birth to live young.

Rats are no exception.

Before giving birth, rats build nests to raise their young, like birds. This is one of the reasons why people believe that rats lay eggs.

In this article, you will find out if rats lay eggs, how babies rats make, how rats give birth, and much more.

Mammals, including rats, evolved from reptiles. Reptiles laid and still lay eggs. With the evolution and adaptation to the environment, mammals have begun to give birth to live young to ensure their offspring survive and perpetuate the species.

All mammals have evolved from members of the reptilian order Therapsida. These ancient reptiles laid eggs, and historians call them “mammal-like reptiles”.

In other words, today’s mammals evolved from prehistoric reptiles that laid eggs.

With evolution and adaptation, mammals began to give birth to live young. There are only two exceptions of mammals that still lay eggs, namely the platypus and the echidna.

It is more beneficial for mammals, including rats, to give birth to live young. This ensures they take the species to the next generation.

No, rats do not lay eggs. They are mammals, and most of them give birth to live young. Rats can give birth to 20 pups at a time and have multiple litters per year. With age, rats’ pregnancy rate begins to decline.

Rats are mammals. Most mammals, except platypus and echidna, give birth to live young.[1] They care for their babies until they are old enough to survive on their own.

Rats give birth to up to 20 babies at once, but the average litter size is 5-10 pups.

They care for their babies until they are six weeks of age, after which the pups are old enough to leave the nest and live on their own.

Mice do not lay eggs but give birth to live young like rats. They are rodents and mammals, related to rats. Both species belong to the same family, Muridae, and none of them lay eggs.

How Do Rats Have Babies?

Rats produce babies only after the male mates with the female. The female enters the heat cycle every few days which lasts from evening to morning. After giving birth, female rats can mate again after 48 hours.

In order to reproduce, both male and female rats must be sexually mature. Sexual maturing occurs around the age of six weeks for males and ten weeks for females.

Once the female rat is in heat, she signals the male by adopting a characteristic position:

Copulation is multiple and lasts less than a second every time. This takes place until the male releases sperm. Sperm that reaches the released eggs (ovules) fertilizes them. The fertilized eggs then attach to the lining of the uterus, where they start to develop into embryos.

Gestation in rats lasts about three weeks, after which the female gives birth to live young.

Related: How Do Rats Reproduce?

How Do Rats Give Birth?

Females start to build their nest a few days or weeks before giving birth. They generally give birth at night as they are nocturnal animals. Before giving birth, the female bleeds and goes into labor, which lasts for about 1-2 hours.

Once the nest is ready and it’s time to give birth, the female rat has mild vaginal bleeding and goes into labor.

Labor can take up to two hours, during which time the female pushes the pups out one by one.[2]

The female rat helps give birth to her pups by breaking the amniotic sac and placenta with her teeth and fingers. She consumes these as they are rich in protein.

The new mother then licks the mucus off of her babies. This frees their airways and oxygenates their tissues. Without the help of their mother, many of the babies would die.

The female rat can consume stillborn pups because they do not move or make any sound.

She repeats the process until the last baby is born.

Female rats usually don’t need assistance when giving birth, but there are cases when the vaginal bleeding is too great, or a baby is stuck during birth. Call a vet if this happens.

Complications during labor are more common in older females (~1 year) that are at their first birth.

Researchers say that over 99% of the world’s animals lay eggs. All birds, most reptiles, fish, amphibians, insects, and five mammals lay eggs.

All birds lay eggs. There are over 10,000 species of birds worldwide.

Most reptiles lay eggs (about 80%), but some species of snakes and lizards give birth to live young.

A few fish species are livebearers:

There are about 8,000 species of amphibians, and most lay eggs,. There are a few exceptions among frog species.

There are about 6,500 species of animals, but only five lay eggs:

About one million species of insects are known, most of them multiplying through eggs. As with all groups, there are exceptions. Some species of beetles and aphids give birth to live offspring.

Rats are mammals that give birth to live young. They do not lay eggs. They can give birth to 20 pups at a time, having multiple litters per year.

Gestation in rats lasts about 21 days. Young rats will be ready to leave the nest around the age of six weeks.

These rodents do not lay eggs primarily due to evolution and adaptation to environmental conditions over millions of years. The birth of live young has helped rats to successfully perpetuate their species to this day.