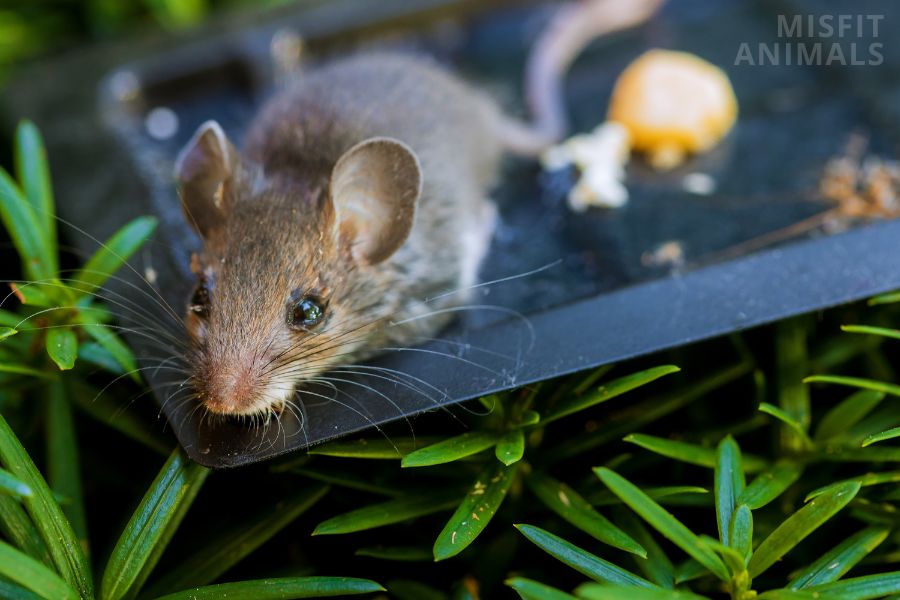 The main difference between mice and rats is their body size. Mice are smaller than rats with more slender bodies. While they are both rodents, they are different species. One of the main similarities is their opportunistic and omnivorous foraging behavior.

Mice and rats are considered pests because they can adapt easily to any type of environment, chewing everything in their way.

They feed on cereals, vegetables, or various other household debris. They build their nests in homes, sheds, garages, gardens, or any place they find suited to multiply.

They also contaminate grains or other food resources, cause flea or tick infestations, and cause damage to many materials, such as wood or textiles. Rats and mice can also cause significant damage to structures.

These two rodents also pose a risk to human and pet health. Both rats and mice can transmit dangerous diseases, such as leptospirosis or typhoid fever.

In this article, you will learn about the differences and similarities between rats and mice, who would win in a fight, their habits, and more.

Rat vs. Mouse: An Overview

Mice and rats are rodents of the Muridae family. The main difference between the two species is the size of the body. Rats can reach 1-2 lbs. body weight, while mice reach 20 grams. They are both nocturnal and active throughout the year, meaning they don’t hibernate.

Mice and rats are part of the same family, Muridae, but they are two different genera.

They share similarities, such as family, sleep cycle, and yearly activity pattern, as they are both nocturnal rodents and are active all year round.

But, there are also many differences that can help you tell them apart.

Differences Between Rats and Mice

Rats and mice have similar appearance and anatomy, but some aspects set them apart. The biggest feature that differentiates these two species is the size of the body. Mice weigh about 20 grams, and adult rats weigh up to a kilogram.

Although mice and rats are very similar in appearance, there are certain physical traits that differentiate them.

The most obvious is the size they can reach, rats being much bigger than mice. Other minor distinguishing features are the size of the ears and eyes or the texture of the fur.

Here are the main differences between rats and mice:

Scientific Classification of Rats vs. Mice

The Muridae family is the largest family of mammals, containing 300 genera and over 1300 species, including mice and rats.[2]

The anatomy of rats and mice is alike, resulting in a similar appearance. But they also have some fundamental anatomical differences that can help you tell them apart.

Rats and mice have slightly different eating habits. Both animals are omnivores, but mice target smaller food items, such as cereal, grain, and small insects, while rats can eat larger foods.

Rats also eat each other when there is no food around, while mice eat their tails.

As nocturnal animals, mice and rats prefer isolated and warm places (especially during the winter), but they tend to make dens in different places. Mice prefer ground burrows and buildings, while rats also nest in trees, sewers, and pipes.

The main difference between pet rats and pet mice is that rats are trainable, while mice are not. This is why rats are most often used in experiments. Rats are also cleaner than mice.

If you are considering adopting a pet mouse or a pet rat, here’s what you should know about the behavior of each species:

You should always get two, as both mice and rats prefer to live in the company of other members of their species.

Similarities Between Rats and Mice

Rats and mice are opportunistic omnivores, meaning they eat almost everything they find. They are similar in appearance with whiskers, fur, black eyes, long tails, and large teeth. Newborns of both species are born hairless, with their eyes closed, and depend on their mother for protection and food.

Rats and mice are most similar in physical appearance and behavior.

Here are the main similarities between rats and mice:

Rats and mice are also similar in terms of the pups they give birth to. Pups are born hairless, with their eyes closed, without fur, and completely helpless.

The babies depend on their mothers for food and protection until they can leave the nest.

Rats vs. Mice: Who Would Win in a Fight?

In a fight between a mouse and a rat, the rat will win. Rats are bigger, have stronger muscles, bigger teeth, and are more aggressive.

In the case of a fight between a mouse and a rat, the rat would win without a struggle. Rats are taller, heavier, and have stronger and more developed muscles.

Rats also have larger teeth and a stronger bite than mice. Rat bites can cause much more damage than those of mice.

The only way a mouse can survive in a fight against a rat is to run away. Something mice are good at.

Rats usually do not kill mice, but it does happen on occasion. This behavior is called muricide. Rats do this to eliminate competition for food or territory. Rats can also kill mice to eat them when they have no food source.

Are Mice and Rats the Same?

No, rats and mice are two different species of rodents. Both are mammals and have an omnivore diet, being opportunistic scavengers.

Are Mice and Rats Related?

Yes, mice and rats are related. They are part of the same family Muride. Both animals descend from a single ancestral species called anagalids. Anagale is a genus of mammals from the early Oligocene of Mongolia. At a genetic level, rats and mice can be considered cousins.

Do Mice Grow Into Rats?

No, mice do not grow into rats. Mice and rats are two different species of mammals. They are both rodents and look alike and are part of the same family, Muridae. Rats and mice are related but are not the same species.