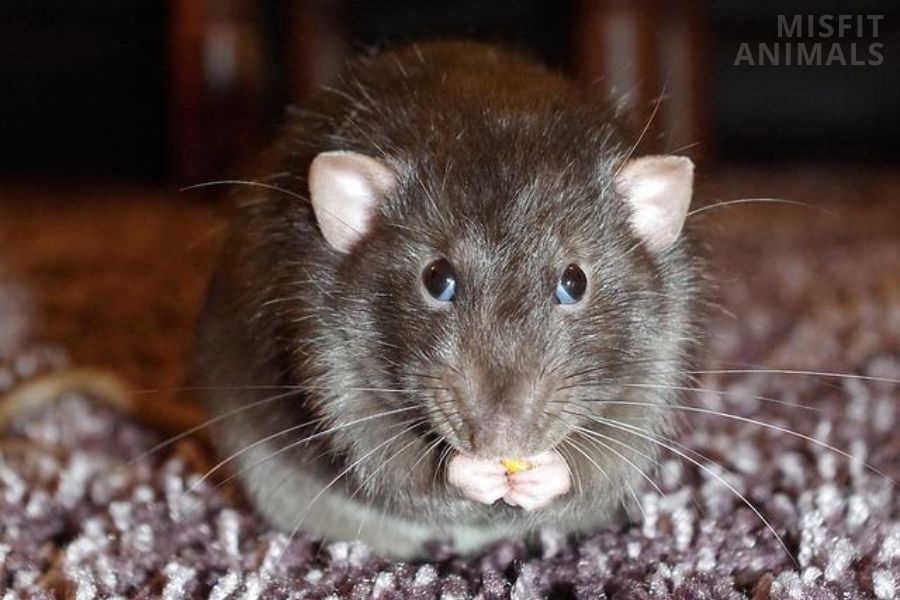 Rats do kill and eat mice, especially when there is not enough food around. Rats are larger and more aggressive than mice and attack them for food or territory. The behavior of killing mice is called muricide. It is supposed that both species can coexist if food is plentiful.

Mice and rats are two species of omnivorous rodents. They consume animal and vegetable protein.

Both species can transmit dangerous diseases to humans, so it is a good idea to call for rodent control if you have rats or mice.

If you keep rats and mice as pets, it is not recommended to keep them in the same cage as they may fight and even kill each other.

In this article, you will find out what the diet of a rat and a mouse is, if rats kill mice, what the differences between the two species are, and many more.

Rats are known to kill mice. This behavior is called muricide. They do this to eliminate competition or eat them. Rats kill and eat mice when there is not enough food.

Rats are more aggressive than mice and pose a higher risk of biting. This trait often makes them kill mice. This mouse-killing behavior is called muricide (the act of killing mice, especially as a trait or instinct in rats).[1]

The mortal bite of the rat is given in the cervical area of the mouse. Rats often consume at least portions of the carcass.[2]

Precisely because rats are unpredictable, it is not recommended to keep them as pets in the same enclosure as mice. Purchase separate cages if you want to keep rats and mice as pets.

Wash your hands after you have handled each species. Mice are afraid of the smell of rats which can stress them out. The smell of mice on your hands can also make rats you.

Related: What Do Rats Eat?

Rats are bigger than mice. On average, adult rats weigh one pound, while mice reach one ounce. The mouse has larger ears in relation to its head than a rat. Mice also have longer tails.

Before you can understand whether rats eat mice, and why they do so, it’s important to know the difference between the two animals.

Rats and mice have similar appearance and anatomy, but some aspects set them apart.[3]

Other differences between mice and rats:

Rats are omnivorous, which means they can eat a variety of meats, vegetables, fruits, and grains. They eat anything they can find, including human feces. Rats consume up to 10% of their body weight per day.

Rats are omnivorous animals, as are humans. They eat a varied diet, mostly consisting of:

Rats can survive on the same foods every day if they can’t find new ones. For example, they can thrive for a long time on grains, pet food, or any other food that is available.

If rats eat the same food every day, they are at risk of developing vitamin-mineral deficiencies, which can lead to illness.

What Do Wild Rats Eat?

Wild rats eat almost anything they find, including animal carcasses.

They eat different things depending on where they live. Rats living in the city, suburbs, and in the wild all have different diets.

Rats that live in the wild[4] usually consume:

Wild rats in forests are more likely to live on a vegetarian diet due to the high amount of plants available.

Wild rats that live in the city or suburbs like to eat garbage and meat. They can also consume pet food if they can’t find anything else.

It is important to make sure rats have no way to get to your trash. Otherwise, they will make a nest near your house and multiply.

The same goes for pet food. If you have pets and keep their food outside, make sure it is placed somewhere safe from rats.

What Do Pet Rats Eat?

Pet rats, like wild rats, are omnivorous[5] and need to eat a varied diet. They can consume:

Do not give pet rats the following foods, as these are toxic to them:

Pet rats love fatty or sweet foods, but these lead to health problems when consumed in excess. Use fatty and sweet foods as treats.

Rats feed in the morning and evening, so two meals per day are enough. Throw away the remaining food – fruits, vegetables, and meat – as it spoils fast.

What Do Baby Rats Eat?

Baby rats (pups or kittens) feed on their mother’s milk until three weeks of age. After that, baby rats start eating solid foods. Those who have not yet left the nest can nurse for a few more weeks.[6]

Pet baby rats can be switched to an adult diet after weaning.

Mice, like rats, are omnivorous rodents. They will eat almost anything, including insects, glue, or soap.

Mice usually consume grains and seeds of cereals or industrial plants. They also eat a wide range of other foods:

They can even eat glue and soap.

Mice need one tablespoon of water per day to survive. They can live without water for up to a month if they eat wet food.

The regular house mouse eats almost 20 times a day and consumes food worth up to 10% of its body weight.

What Do Wild Mice Eat?

Wild mice feed on anything they can find. They can have certain preferences depending on where they live:

As with rats, make sure you do not leave trash or pet food outside. Mice nest when they have a permanent food source, resulting in them infesting your home.

What Do Pet Mice Eat?

What to Avoid Feeding Your Pet Mouse

What Do Baby Mice Eat?

Mice eat milk until they are weaned at the age of 21 days. After this period, mice can eat solid food. When they finish developing, mice start looking for food on their own.

Can Mice Live With Rats?

Mice and rats can live together in exceptional conditions. They must have enough space to hide or mark their territory and plenty of food. Mice are afraid of the smell of rats, and it will be a problem to be held together. Rats are also sometimes unpredictable and can attack mice and even kill them for no apparent reason.

Rats can eat almost anything when they do not have a food source, including dead mice. Both species are omnivorous animals that prefer to eat fruits, vegetables, seeds, and sometimes meat.

Rats can hunt and kill mice, especially when there is not enough food or territory. This behavior (called muricide) is further studied by researchers to understand why it happens.

Yes, rats kill mice when they do not have enough food or to eliminate competition. Sometimes they kill rats for no apparent reason. Rats and mice can be kept as pets as long as they have enough territory and food, but it is not recommended.

Do Rats Eat Other Animals?

Rats can kill and eat other animals such as lizards, birds, small mammals, and sometimes even fish. If there is not enough food they will eat almost anything to survive, including other species.