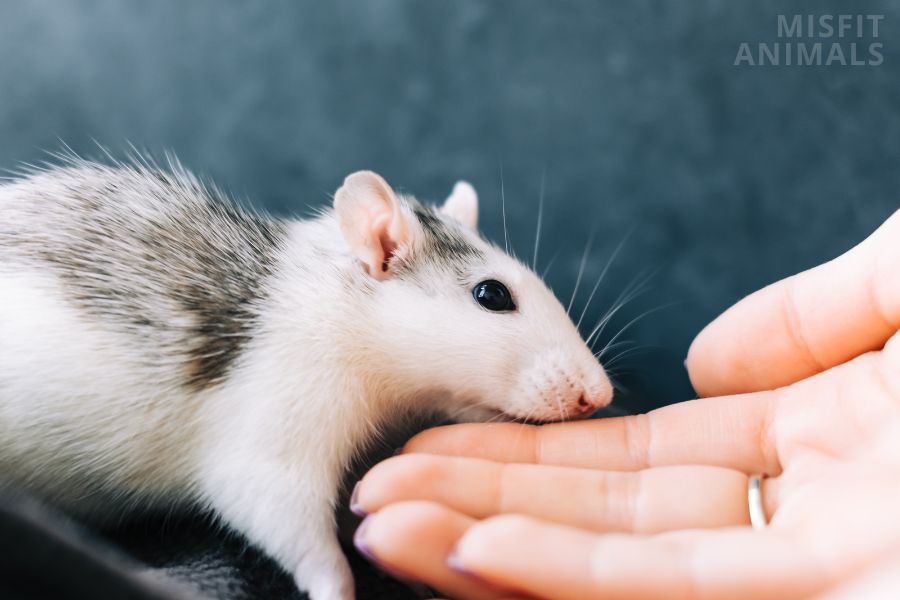 Wild and pet rats bite. They do this when they feel cornered or stressed. Pet rats also bite if you smell like food. Rat bites are painful and can transmit diseases through their bite, including rat bite fever, which is potentially life-threatening.

People are in general scared of rats, but mostly not to get bitten.

But they also display defensive behaviors, such as exposing their bellies. This happens when two males fight for territory.

If you see a rat adopting positions of attack or defense, walk away. If you don’t, it might bite you.

In this article, you’ll learn why rats bite, if their bites are dangerous, what a rat bite looks like, and more.

Yes, rats can bite when they’re stressed, threatened, scared, or cornered. They do it out of self-defense. They are afraid of us as we are of them. Rats can also bite other rats, mice, or other small animals.

The most common reason rats bite is because they feel threatened. They do it out of fear.

Even if you didn’t do anything to scare the rat, the simple fact that you are bigger and more imposing makes it feel stressed and threatened.

Rats also bite each other when fighting over the following:

Pet rats can bite, but this is not as common as in wild rats. Because pet rats are domesticated animals, they are more accustomed to the presence of people or other pets. They don’t get scared as easily as wild rats.

Pet rats can also fight and bite each other, but they are generally well-behaving pets.

Rat bites look like small puncture wounds. You can often see teeth marks around these wounds. Bites can become inflamed and infected, with pus coming out.

Before evaluating a rat bite, you need to be able to distinguish a bite from a small pinch. A real bite is when the cut is deep and eventually it bleeds. A pinch is just a small scratch and nothing more.

Rats bite at the extremities of the body and most bites occur on the hands, wrists, or fingers.

The majority of bites cause no bleeding and they feel like insect bites.

Rats have long incisor teeth and a strong bite, with maxillary muscles that can exercise up to 12 tons per square inch.[1]

Does a Rat Bite Hurt?

Rat bites hurt when they are deep. If the rat only scratched your skin with its teeth, the pain quickly disappears. When the bite is deep and the area is inflamed, the pain can persist for several hours or days.

Superficial rat bites, the ones that don’t penetrate the skin, are not as painful as deep bites.

In deep bites, the rat penetrates the skin with its teeth, leading to bleeding and inflammation. Inflammation is usually severe and causes a lot of pain[2] which can last from a few hours to multiple days if not treated.

First aid is different depending on the severity of the injury. Treat your wound as soon as it happens.

Rat bites can be dangerous as rats can transmit diseases. One of the most common diseases rats transmit through their bite is rat-bite fever. This disease is caused by two bacteria found in the saliva of rats. Not all rats carry diseases.

Rats can transmit diseases through bites, feces, and urine. The most common disease transmitted by rats to humans through their bite is rat-bite fever.

This disease is an infectious disease[3] that can be caused by two different species of bacteria:

The infection usually comes from the bite of infected rodents or from the consumption of contaminated water or food.

If left untreated, rat-bite fever can have severe health consequences and even lead to death.

Vomiting and sore throat can occur in case of infection due to ingestion of contaminated water or food.

In the absence of treatment, this disease can lead to inflammation and infection in several organs:

Diseases from rat bites are treated with antibiotics. For the treatment to be effective, you should take antibiotics as soon as you notice symptoms.

Contact your doctor immediately if a rat bit you and you develop the symptoms of rat-bite fever.

Why Do Rats Bite Humans in Their Sleep?

Rats do not bite people in their sleep, but mice can. Unlike mice, rats do not spend that much time in the rooms where humans sleep. If you have rats in the house and you felt something pinched you while you were sleeping, it was probably the sharp claws of the rat that scratched you.

Can You Die From a Rat Bite?

Unfortunately, yes, you can die from rat-bite fever. This disease is curable if antibiotic treatment is given from the first symptoms. Otherwise, the infection can advance to the brain, heart, or other organs, becoming fatal.