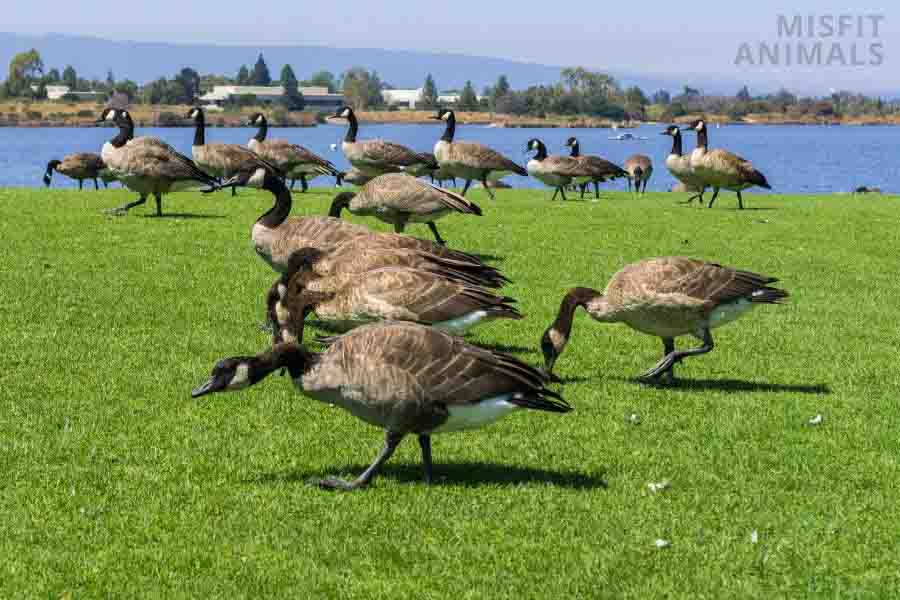 Grass is a staple of the plant kingdom and a necessary part of many ecosystems. It’s also an important food source for many animals.

This blog post will introduce you to a few common and unique animals that eat grass.

Grass is a staple food for many animals. Particular animals have even specially adapted digestive systems that allow them to digest grasses.

The western gray kangaroo (Macropus fuliginosus) is a large marsupial from Australia. These kangaroos are commonly found in the southern and western parts of the country, but can also be found in the northern territories.[1]

Gray kangaroos are one of the biggest types of kangaroos, with males weighing up to 84 kg (185 lb) and females up to 35 kg (77 lb). They have a distinctive gray fur, which is why they are called “gray” kangaroos.

These kangaroos are mostly herbivores, and their diet consists mainly of grasses.

Grasslands around the world are home to a variety of grazing animals, and these ecosystems depend on the relationship between the plants and the animals that eat them.

The grasses provide food and shelter for the animals, while the animals help to spread the seeds of the grasses and keep the plants healthy by eating them.

The grasshopper is one of the most common animals that eat grass. They are found in nearly every region of the world, known for their voracious appetite for vegetation. A single grasshopper can consume up to 12,000 times its own body weight in plants per day.

While most grasshoppers are herbivores, there are a few species that are omnivorous or even carnivorous.

The majority of the grasshopper’s diet is made up of leaves, stems, and seeds from plants. They will also eat other insects, especially if they are young and vulnerable.

Grasshoppers are an important food source for many animals, including birds, reptiles, and small mammals.

In some parts of the world, they are considered a delicacy and are eaten by humans.

Capybaras are the largest rodents in the world and they are native to South America[2]. They are social animals and live in groups of up to 20 individuals.

Capybara are herbivores and their diet consists mainly of grass, but they also eat leaves, fruits, and shoots.

The capybara is a popular pet in some parts of the world, but it is also hunted for its meat and fur. It is not considered to be a threatened species, but it is protected in some countries.

The geometric tortoise is a small, land-dwelling reptile. As its name suggests, it has a hard, shell-like carapace that is covered in distinct patterns or markings.

While the carapace of most tortoises is domed, the Geometric Tortoise’s is relatively flat. It is native to southern Africa and can be found in countries such as Botswana, Zimbabwe, and South Africa.

The Geometric Tortoise is a herbivore and primarily feeds on grasses. It is one of the few tortoise species that are known to eat grasses regularly.

In the wild, these animals typically graze on short grasses, but they will also consume taller grasses if they are available. While the primary diet of the Geometric Tortoise is grass, they do also consume other plants, fruits, and vegetables.

Geometric Tortoises usually graze in the morning and evening, when the temperature is cooler and the grasses are more succulent.

In captivity, these tortoises should be offered a variety of different plant foods to ensure that they are getting all the nutrients they need.

Geometric Tortoises typically live for about 50 years, but some individuals have been known to live for over 100 years.

The giant panda is one of the most unique and interesting animals in the world. They are easily recognized by their black and white fur and their large size. Giant pandas are native to China, where they have been revered for centuries.

Giant pandas’ diet consists primarily of plants[3]. Bamboo is their main food source, and they consume up to 12 pounds of it each day. Giant pandas spend most of their time eating and resting, but they also enjoy playing and climbing trees.

Due to habitat loss and hunting, giant pandas are an endangered species. There are only around 1,800 giant pandas left in the wild. Thanks to conservation efforts, their numbers are slowly increasing.

Moose are the largest member of the deer family. They are shy but curious animals and love to eat grass. They are found in forested areas across North America and Europe.

Moose are large animals. An adult moose can weigh up to 1,000 pounds! That’s as much as a car. Moose are also tall, reaching up to six feet tall at the shoulder, which is taller than most people.

Moose love to eat grass. In fact, moose are mostly herbivores, which means that they only eat plants. They also eat twigs, leaves, and bark.

They eat so much vegetation that they can damage trees and shrubs.

The camel is a big, hairy animal that lives in the desert. Camels are herbivores, which means they only eat plants. They can go for long periods of time without drinking water.

Camels are native to the Middle East and North Africa. They have been used by humans for centuries, first as beasts of burden and later as racing animals.

Today, there are two main types of camels:

Camels are well-adapted to life in the desert. They have long legs that help them walk across the sand without sinking, and they can go for weeks without drinking water. Camels store fat in their humps, which they can use for energy when food is scarce.

Giraffes are the tallest of all land-living animals, according to National Geographic. They primarily eat the leaves of trees and grasses of the savannah.

A giraffe’s spotted coat provides camouflage in the trees and bushes of its home range in Africa. The animals usually live between 25 and 30 years in the wild, according to the San Diego Zoo.

The Canada goose is an herbivorous bird. It is a waterfowl species native to North America.

Their diet consists mostly of plant material, such as leaves, stems, roots, and seeds. They also eat small invertebrates, such as insects and snails.

The Canada Goose is a migratory bird, meaning that they travel long distances between their breeding and wintering grounds. During the breeding season, which takes place in the spring, they nest near water bodies such as lakes, rivers, or marshes.

The female will lay a clutch of 3-8 eggs, which she will incubate for about 25-28 days.

Once the chicks hatch, they are cared for by both parents until they are old enough to fend for themselves.

Wildebeest are antelopes found in Africa. They are also known as gnus. Wildebeest are herbivores, which means they primarily eat plants.

As social animals, they live in herds. The size of a herd can vary from a few dozen to several thousand individuals. They are also migratory animals and travel great distances in search of food and water.

Each year, millions of wildebeests migrate between the Serengeti National Park in Tanzania and the Maasai Mara National Reserve in Kenya. The wildebeest migration is one of the largest mammal migrations in the world.

Do Ants Die in Cold Weather?

In comparison with many insects though, ants have a much higher supercooling ability which allows them to tolerate lower freezing points.

How to Find Ants in the Winter?

Well, the good news is that some species of ant can actually hibernate or enter into dormancy to wait out harsh weather conditions!