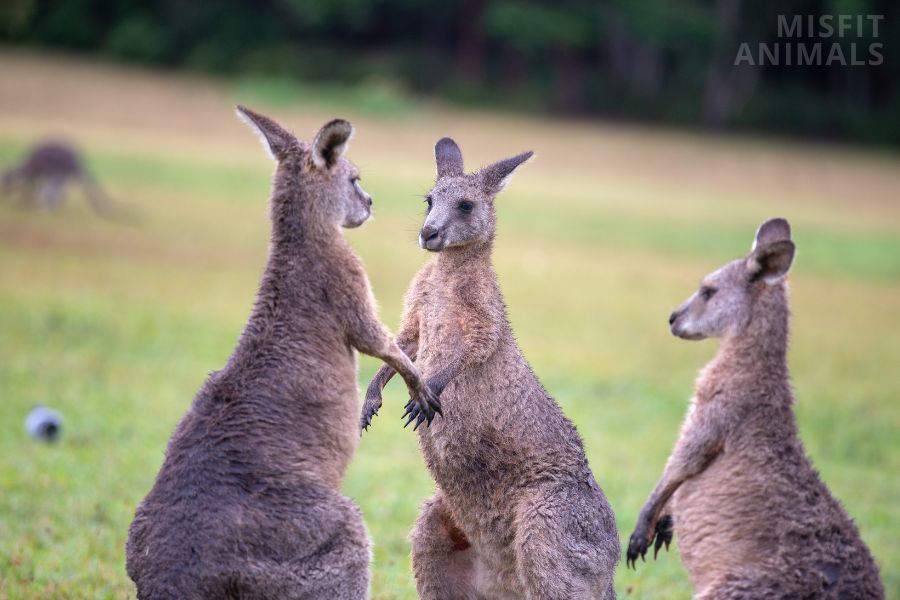 The six kangaroo species of Australia are all interesting in their own right. From the small black wallaroo or the gigantic red kangaroo, each species offers unique and valuable information to kangaroo enthusiasts.

If you would like to learn about the different species of kangaroos and their characteristics, you came to the right place.

In this article, we cover everything you need to know about the different types of kangaroos, as well as the similarities and differences between them.

There are six kangaroo species, all different in size, weight, life expectancy, and range. There also share many traits, like their life cycle, diet, behavior, and mating.

Kangaroos are the world’s largest marsupials. They evolved to withstand the harsh weather conditions and poor vegetation of Australia.

Although they are herbivores, kangaroos are large. Few animals see kangaroos as prey, as they are larger than most predators in their habitat.

Here are the six species commonly referred to as kangaroos:[1]

As the term “kangaroo” refers to six different species, it is natural that there are many differences. One of the main differences is size, ranging from 6.9 ft (red kangaroos) to 2.5 ft (female black wallaroo).

Here are the main differences between kangaroo species:

Kangaroos share a lot of similarities as they are close relatives. Each species goes through four different life stages and all adult males fight for the right to mate and to impress females.

Here are the main similarities between kangaroo species:

There are four kangaroos in the Osphranter genus. These include the two wallaroos, which are generally smaller and lighter than kangaroos.

The Osphranter genus includes both kangaroos and wallaroos. Wallaroos are in between wallabies and kangaroos in size.

The distinction is hazy, as antilopine kangaroos are sometimes referred to as wallabies or wallaroos if they are smaller than an average kangaroo.

Here are the four kangaroos in the Osphranter genus:

Red kangaroos are the tallest of all kangaroos. They are the largest marsupials in the world. Their most recognizable characteristic is their muscular physique. The largest individual measured 6.9 ft tall and weighed 201 pounds.

Their strength is complimented by a large tail and sharp claws on their hind legs. Kangaroos use their tail to balance themselves while they kick forward, inflicting potentially fatal injuries.

Red kangaroos are highly social and live in mobs with up to 100 members.

While the longest-living individual reached 27 years old, these wild kangaroos have an average lifespan of around eight years.[3]

Antilopine kangaroos are the second largest species in the Osphranter genus. They have narrow faces and short arms. Their physique is stocky and their arms and feet are less significant than red kangaroos’.

Depending on their size, some individuals may be referred to as antilopine wallaroo or wallaby if they are small enough.

Males’ furs are reddish and tan while females are greyish. Their eyes resemble doe eyes. They are generally social, but older males are often solitary.

As their scientific name suggests, common wallaroos are generally muscular for their smaller stature. Sexual dimorphism is present in their fur color, as females tend to have paler fur than males.

Common wallaroos tend to be solitary. Adults only look for partners when they want to mate.

They are called wallaroos because they are generally smaller than other kangaroos but bigger than wallabies.[5]

There are four subspecies of the common wallaroo with different fur colors:

Black wallaroos are the smallest of all kangaroos. The heaviest individuals (77 pounds) are only a little heavier than the average common wallaroo (70 pounds).

Their silhouette resembles a pear looking from the front. Males are much darker than females. Their tails are especially long and narrow for their stature.

The Macropus genus consists of eastern and western gray kangaroos. They are among the two most common kangaroos in Australia.

Osphranter (alongside Notamacropus) was considered a subgenus of Macropus until 2019 when it was moved to the genus level.

This did not change the general classification, as both Osphranter and Macropus contain species of kangaroos.[7]

Here are the two kangaroo species in the Macropus genus:

As they are not as lanky as red kangaroos, eastern gray kangaroos’ muscle mass is more concentrated.

Eastern gray kangaroos are the heaviest and second tallest kangaroo species. Their eyes are bigger and their face is narrower than red kangaroos’. Their tails are muscular, thick, and can be as long as 3.2 ft.

Eastern gray kangaroos live in mobs as well. Their social hierarchy is similar to red kangaroos, with one large alpha male and several males competing for females.[8]

Their claws are larger than red kangaroos’ and eastern gray males have longer forearms.[9]

There are two subspecies of the eastern gray kangaroo:

Western grays are difficult to distinguish from their close relatives, the eastern grays. The main difference is their weight and color. Their fur is darker and they generally weigh 20 pounds less than eastern grays.

Western grays kangaroos are socially active and their mob functions the same as eastern gray mobs.[10]

There are two subspecies of western gray kangaroos:

Kangaroos are found nearly anywhere in their native Australia, although some species are confined to smaller habitats.

What Is the Most Common Kangaroo?

The most common kangaroos are the red kangaroo and western gray kangaroos. Red kangaroos’ range is bigger but eastern grays are more abundant.

Are Wallaroos and Kangaroos Different?

Are Kangaroos Only Found in Australia?

Yes, kangaroos are only found in Australia. They are endemic to the continent and have evolved to live there. Australia broke away from the supercontinent Gondwana 180 million years ago with the predecessors of kangaroos on it.

How Many Species of Kangaroos are There?

Depending on the definition, there are either four or six kangaroo species. Wallaroos may be excluded from the term “kangaroo” for their smaller size. As wallaroos are taxonomically ordered alongside red kangaroos and antilopine kangaroos, it is correct to refer to them as kangaroos.

How Common are Kangaroos in Australia?

Kangaroos are more common than humans in Australia. In 2019, the Australian Government estimated that around 42.8 kangaroos live in Australia. Australia’s estimated human population is around 26 million in 2022.[12]