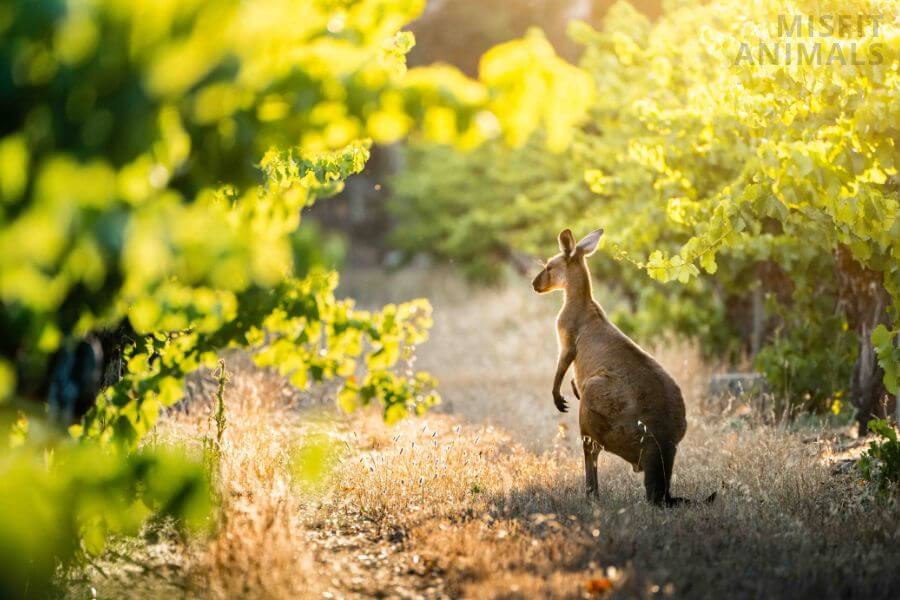 Kangaroos in the wild live for about eight years, while they live up to 25 years in captivity. The longest-living kangaroo species is the Red kangaroo. Kangaroos have four life stages and become adults at around two years old.

Kangaroos are the signature animals of Australia. The joyful marsupials are favorites among many animal lovers.

But as popular as they are, few people know about their lifespan and how long they live.

In this article, we will take a closer look at kangaroos’ lifespan and life cycle, and find out how long kangaroos live.

How Long Do Kangaroos Live?

Kangaroos live between eight years to 25 years under normal circumstances. Kangaroos in captivity normally live longer than kangaroos in the wild.

Red kangaroos are the longest-living of all kangaroo species. Although they normally live for eight years, some specimens are believed to live for 25 years in the wild.[1]

Kangaroos in captivity also live up to 25 years, assuming they are well-cared for.

What Determines How Long Kangaroos Live?

Many factors determine how long kangaroos live: Heat, drought, region, and species are all determining factors.

Kangaroos are native animals of Australia. They are well suited for Australia’s extreme conditions, but several factors determine their life expectancy:

Kangaroos are tolerant to extreme heat. One study in a red kangaroo-infested area measured temperatures of 111 °F.[2]

But as the temperature in Australia can reach up to 123.3 °F, it can become too hot for kangaroos.[3] They can survive in these conditions, but longer exposure to high temperatures causes dehydration-related complications.

These complications can shorten the life expectancy of kangaroos.[4]

Droughts in Australia are becoming more common due to climate change. These droughts hinder vegetation growth in regions with kangaroos.

As herbivores, kangaroos exclusively rely on a diet consisting of plants. Fewer plants to eat cause kangaroos to starve, which weakens their immune system. This makes them less resistant to sickness and more vulnerable to predators.

Areas near the Australian coastline are urbanized and many highways cross the middle of the continent.

Kangaroos in areas where human activity is high are more likely to die of car collisions or hunting, bringing down their average life expectancy.[5]

Each kangaroo species has a different average lifespan. This is due to their physiology and evolutionary differences.

You can read more about the lifespan of different kangaroo species later in the article.

How Long Do Wild and Captive Kangaroos Live?

Kangaroos live for around 8 years in the wild and up to 25 years in human care. Kangaroos need specific conditions in captivity to thrive, such as temperature, space, and a sufficient diet.

Kangaroos live shorter in the wild because they are susceptible to more danger, like hunting or vehicle collision.

As wild animals, they need sufficient care when kept in captivity. They need a huge roaming space to develop and maintain their muscles, as their bodies evolved to roam the wilderness.

How Long Do Wild Kangaroos Live?

Wild kangaroos live for around eight years, but their life expectancy ranges from six to 27 years in extreme cases.

Kangaroos in the wild rarely reach their maximum life expectancy as they die prematurely from many causes:

Although kangaroos have no real natural predators, many animals hunt their young. Dingoes, eagles, and bigger snakes occasionally hunt joeys.

How Long Do Captive Kangaroos Live?

Kangaroos are more likely to reach their maximum life expectancy of 18-25 years in captivity. They are under constant attention and aren’t under threat of human impact, dehydration, starvation, or predation.

Kangaroos do need some specific conditions in captivity to reach their maximum life expectancy:

There are six species of kangaroos in Australia. These six species have different lifespans both in the wilderness and under human care.

Kangaroos can expect to live between six and 14 years in the wild on average. Captive kangaroos live longer than their wild counterparts by an average of ten years.

Kangaroos have four life stages: Birth, young of the year, juvenile and adult. They reach adulthood at around two years old.

Every species of kangaroo ages differently, but it is possible to estimate how long each life stage lasts on average.

Life stages depend on weight and development as well. For example, if a kangaroo joey is too big to fit into its mother’s kangaroo pouch at six months old, it may develop faster than average.

Only a few threats are present to kangaroos but they have to be wary of human activity. The few natural predators they have usually only attack joeys. Drought can also cause vegetation to become sparse, leaving them with less food.

The leading cause of death for kangaroos is nutrient deficiency. It is mostly a problem for young and developing kangaroos. Individuals that reach adulthood have adapted to the harsh conditions of their surroundings.[15]

The main death causes of kangaroos are as follows:

Roads are built throughout Australia in kangaroo territories, making them susceptible to vehicle collisions.

Red kangaroos are the most likely of all kangaroo species to be hit by cars because of their tendency to immediately flee when sensing danger. This can lead them to accidentally wander into oncoming traffic.

Australian cuisine features kangaroo meat as the continent is abundant in them. As such, they are hunted for their meat, as well as crop security.

Kangaroos are also declared pests by the Australian government. They frequently wander to farmlands to graze, so farmers often shoot them to protect their crops.

Kangaroos have few natural predators, but joeys do need to be wary of carnivores.

Young kangaroos are too weak to defend themselves, so if they get too far from their mob, predators may see them as targets.

Droughts inhibit plant growth and water accessibility. This causes some kangaroos to starve or dehydrate.

Young kangaroos are especially threatened by drought, as their developing bodies need sufficient nutrients to grow. Underdeveloped joeys are defenseless against illnesses and can die of starvation or dehydration.

Kangaroos are relatively long-living animals with an average life expectancy of eight years. They live around ten years more in captivity because the dangers of the wild aren’t present under human care.

The different species age differently, as red kangaroos may live for 27 years while black wallaroos live to be a maximum of 12 years old. In the wild, kangaroos mainly die due to human activity, nutrient deficiency, and predation.

How Old Was the Longest-Living Kangaroo?

The longest-living kangaroo was 27 years old. This was a red kangaroo in captivity. Only red kangaroos can live to be this old and they can only reach this age in captivity, as many factors in the wild may cause their death.

Do Kangaroos Get Periods?

No, kangaroos do not get periods. Female kangaroo menstruation is called covert menstruation. Their body absorbs a thin lining of their uterus in each cycle. This helps kangaroos to mate and reproduce more frequently

How Many Kangaroos Live Are Left in the World?

There are about 42.8 million kangaroos in Australia, the only place they can be found in the World. This estimate comes from the Australian government in 2019, but this can be as large as 50 million now. This means kangaroos outnumber Australia’s population, as only about 26 million people live there.

How Many Babies Do Kangaroos Have in a Lifetime?

Kangaroo does have around eight children in their lifetime. Kangaroos stop giving birth at about 12 years of age, and most of their young might not survive their childhood. On average, two kangaroos per mother reach adulthood.