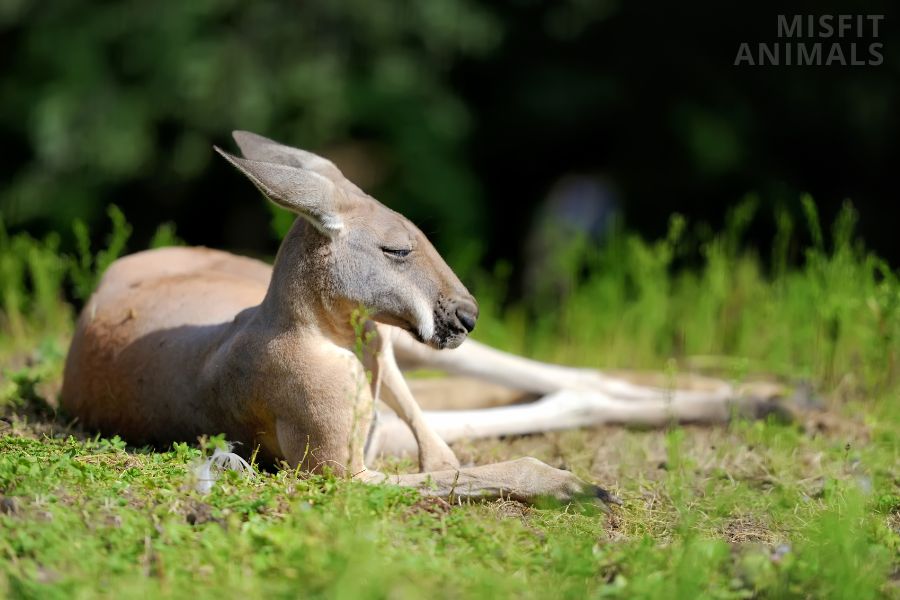 Kangaroos live in Australia and no other places. Kangaroos do not build nests; they have pouches to house their newborn babies. Threats to kangaroos’ national habitat include drought, urbanization, and the introduction of non-native animals.

Kangaroos are one of the most recognizable creatures on Earth.

Their strong jumping legs and pouches differentiate them from most animals and they are a favorite among nature-lovers.

It’s natural that enthusiasts want to know where kangaroos live, how they live, and how different kangaroo species’ habitats differ.

In this article, we will explore everything you need to know about kangaroos’ natural habitat and why they live there.

Kangaroos are native to Australia. They live in every climate region of the continent, including desert plains, temperate grasslands, tropical rainforests, and more.

Kangaroos only live in Australia. They have adapted to both the mild and extreme climates[1] of the continent over time.

As such, kangaroos live in the following climate zones:

Kangaroos live in the deserts of Australia. Deserts are in all Australian states and territories. They are hot and arid places where temperatures reach up to 123.3 °F.[2] Kangaroos adapted to the extreme heat and eat the small amount of vegetation found there.

Tropical regions of Australia are found in Queensland and the Northern Territories. These biomes offer Kangaroos vast vegetation to eat. The dense forests also provide protection against predators (like dingoes).

Subtropical regions are found in Queensland and New South Wales. These regions offer a mixture of forests and plains, so the kangaroos have enough vegetation to eat and vast clearings to hop around. These regions also have many farmlands which provide even more food.

Australian temperate regions are full of woodlands and grassy plains, as well as farmlands.

Dry Mediterranean regions are found in Western Australia. As kangaroos can live in extreme heat and need plants to eat, these regions are a perfect mix of weather and vegetation for them.

What Do Kangaroos Eat in Their Habitat?

Kangaroos eat a variety of plants in their surroundings. Their only needs are access to water and plants to graze.

Kangaroos are herbivores. Although some evidence suggests that their ancestors once ate meat, their digestive system is not suited for meat consumption. Regardless, there have been occasions when kangaroos nibbled on smaller dead animals

As grazing animals (like cows) they eat ground vegetation[3] (mainly grass) and regurgitate their food in order to digest it.

Where Do Different Kangaroo Species Live?

The term kangaroo refers to six large species of marsupials in Australia. These six species all inhabit different parts of the continent, although some of their habitats overlap with each other.

These species are divided into two genera of Osphranter and Macropus.[5]

Where Do Red Kangaroos Live?

Red kangaroos are the largest and most dominant species of kangaroos. They are spread across the continent and prefer more arid climates, as they are tolerant to extreme heat.

They share their habitat with all other kangaroo species. Black wallaroo and antilopine kangaroo territories only overlap with red kangaroos’ in a few places.

Red kangaroos are most common in grassy planes with a few trees, but they can live in any habitat[6] with sparse vegetation and hot weather:

Where Do Eastern Gray Kangaroos Live?

They are less tolerant to heat than Red kangaroos, but they can still survive in areas[7] with patchy vegetation:

Where Do Western Gray Kangaroos Live?

Western gray kangaroos are distributed throughout southern Australia, only being introduced in Queensland and New South Wales in 1970.

They typically inhabit the following biomes:[8]

Where Do Antilopine Kangaroos Live?

Where Do Common Wallaroos Live?

Common wallaroos share their habitat with all other kangaroo species, although only a small amount with western gray kangaroos. They live in most of mainland Australia and stay away from the western and easternmost areas, as well as the Simpson Desert.

Common wallaroos are tolerant of extreme heat. They like to inhabit areas with hot weather with sparse vegetation:[10]

Where Do Black Wallaroos Live?

Black wallaroos are found in a small area in Arnhem Land, northern Australia. They share their territory with antilopine kangaroos.

Kangaroos do not build nests and shelters. They live in groups called mobs which can have more than a hundred members. Kangaroo mothers shelter their young in their pouches.

Kangaroos don’t need nests. They are social creatures that protect each other. Nests are also redundant as few natural predators threaten kangaroos.

Kangaroo mothers also do not need nests as their offspring are protected in their pouches. Kangaroo joeys grow inside their mother’s pouch until they are old enough to be let out permanently.

Kangaroos’ habitat is under threat of urbanization, drought, and the introduction of non-native animals.

Although kangaroos live in every climate and region of Australia, and they are classified as “least concern” on the IUCN Red List,[12] their habitat is endangered by the following:

Cities and towns on the coast have chipped away from natural kangaroo territories. In desert areas, where human settlements are more sparse, national highways are built.

Kangaroos are the most susceptible animal to colliding with vehicles in Australia as they are the most widespread.[13]

Kangaroos are used to arid climates, but droughts endanger their diet. Due to climate change, droughts are more common in kangaroo-infested areas, causing the Australian vegetation to be more sparse.

This leaves kangaroos with less food.

Colonization brought animals to the continent that were not native. The most dangerous animals to Australia’s ecosystem are rabbits.

Rabbits have no natural predators in Australia and reproduce quickly. Rabbits have the same diet as kangaroos and have intruded upon kangaroo territories, eating their food.

Kangaroos are marsupials native to Australia. The term kangaroo refers to six species that populate different areas of the continent. Kangaroos do not build nests and need greenery to graze on.

Kangaroos can live in any climate and biome of Australia. Red kangaroos prefer dry and hot areas, while black wallaroos live in regions with thick vegetation and forests.

Why Do Kangaroos Live in Australia?

Kangaroos live in Australia because they developed here. Australia was separated from all other land masses when kangaroos evolved, which is why they are only found there. They adapted to the climate of Australia and have not migrated since.

No, kangaroos aren’t territorial. They move about four miles per day and travel in mobs, but they do not defend their territories from other mobs or different species. [14] Kangaroos don’t have natural competition with other animals.

Are Wallabies and Kangaroos the Same?

No, wallabies and Kangaroos aren’t the same. Although both are marsupials of the Macropod family and look similar, wallabies are smaller, weigh less, and are generally slower compared to kangaroos.

Where Are Kangaroos From?

You can only find kangaroos in Australia, but their ancestors are from South America. Although this origin dates as far back as 180 million years when all the continents were united as one landmass named Gondwana. Kangaroo ancestors lived in the territories that would only later become South America.