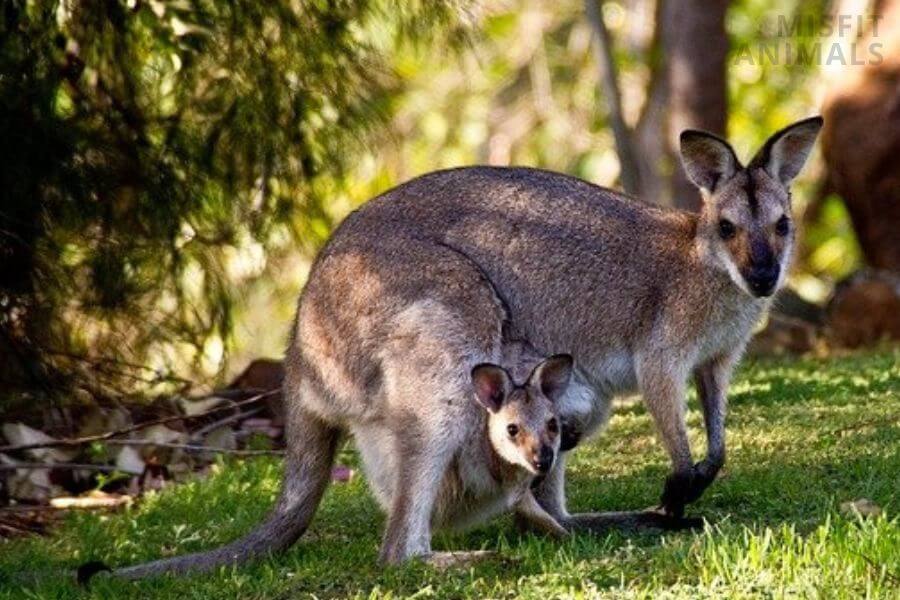 Baby kangaroos are called joeys and are born underdeveloped. They are nursed in the pouch for eight to ten months. Kangaroos have four life stages and reach adulthood at 20-24 months old.

Baby kangaroos are adorable little creatures that hop around the wilderness of Australia. They grow up to be strong brawlers with powerful kicks. They also have an interesting name.

But how do they grow up and what are they like while growing up?

This article will give you an insight into the appearance, habits, diet, threats, and life of baby kangaroos.

What Are Baby Kangaroos Called?

Apart from joey, there are many names for kangaroos when they grow up.[1]

A female joey is called:[2]

Baby kangaroos look vastly different at different stages of their lives. At birth, they are the size of a jellybean and are completely hairless. Between birth and six months, they grow fur and gain 4.4 pounds. At six months, joeys are fully furred and occasionally get out of their mother’s pouch.

Kangaroos grow rapidly during their childhood: From birth to adulthood, they can grow from one inch to as big as six feet.[4]

Let’s take a look at their development.

Newborn kangaroos are born after around 33 days of gestation. They are about one inch long and weigh 0.03 ounces.

They are pink, hairless, blind, and underdeveloped. They use their short limbs to climb up to their mother’s pouch and develop further there.

During the first six months, kangaroo joeys grow fur and gain about 24 pounds. They are as tall as to be able to reach into their mother’s pouch.

At this age, they slowly get used to the outside world. They crawl back to their mother’s pouch frequently, but at around eight months, they retreat to the pouch to suckle on a teat for milk.

Kangaroos have four life stages: Birth, young of the year, juvenile, and adult. Until they reach adulthood, kangaroos are considered joeys.

The baby kangaroo grows at an accelerated rate throughout its life.[5] From birth to maturity, it can grow as much as six feet.[6]

Kangaroo joeys are born outside their mother’s pouch and have to climb inside. They are underdeveloped and must stay in the pouch, sucking on teats, to grow.

Young of the Year

Kangaroos attach after birth to a teat for 70 days. After about six months, they start to leave the pouch occasionally.

This is the life stage when kangaroos go through the most drastic changes.

Characteristics of young of the year kangaroos:

Around ten months old, kangaroos are considered juvenile. For most species, weaning starts in this life stage at 12-20 months.

Juvenile kangaroos need 95% of their mother’s energy intake to grow.

After two years, kangaroos become adults. They reach their adult weight and height. Males spar for dominance and become heavily muscular in some cases.

Kangaroos are no longer joeys when they reach adulthood. This happens when they become sexually mature.

To give an accurate picture of baby kangaroos from different species, the following kangaroos are compared below:

What Sounds Do Kangaroo Joeys Make?

Kangaroos after birth do not make any noise. After their vocal cords have developed, they make clicking, squeaking, and growling sounds.

Joeys mimic the sounds of adult kangaroos, but their voices are weaker and higher pitched. Their voice reaches a normal pitch when they are mature.[13]

Younger joeys usually only make sounds to call for their mother. They start to express other emotions through sound later in life.

What Do Baby Kangaroos Eat?

Baby kangaroos feed on their mother’s milk until they are weaned at around 12-20 months old. Each of the four teats in the pouch develops different kinds of milk for the life stages of joeys.

Kangaroos suckle on their mother’s milk exclusively for around six months. After this period, they will eat solid food and drink milk until they are old enough or heavy enough to stop.

Females have four teats. Each teat provides milk with different supplements to support the growth of their babies in different life stages.

Kangaroos are herbivores, meaning they never eat meat. Joeys only eat plants such as the following after they are weaned:

There are few threats to kangaroo babies, but some still exist. Predators can snatch away joeys from their mothers. Human activity, such as driving or hunting is also a threat to baby kangaroos.

Kangaroos live in packs and mothers take extensive care of their children. There isn’t many threats to baby kangaroos, but some dangers do exist.

These threats are present for baby kangaroos:

As kangaroos are pack animals, and capable of defending themselves, they have few natural predators. When a joey gets away from the pack, predators have a much easier time against the defenseless and weak baby.

Some predators that are threats to joeys:[14]

Due to urbanization, roads have intruded upon kangaroo territories. Careless joeys hopping on the road can get hit by ongoing traffic.

Although hunting kangaroos was originally illegal, they are overpopulated and have become pests. The Australian government has given licenses to hunters to reduce overpopulation.[15]

Australian cuisine features kangaroo meat, so they are hunted for consumption as well. Baby kangaroos are not the primary target for hunters, but they are shot down occasionally.

Baby kangaroos are called joeys. They are born blind, hairless, and underdeveloped. They have to climb into their mother’s pouch as they are born outside of it. They rapidly grow over time until they reach adulthood at around two years of age.

Kangaroo joeys need a lot of movement to grow. After they exit the pouch when they are six months old, they do come back for their mother’s milk until they are 12-20 months old. After they are weaned, they only eat plants.

How Long Do Kangaroos Live?

Kangaroos can live for around 27 years. Kangaroos’ life expectancy changes from species to species. For example, an Antilopine kangaroo lives for around 16 years, but a Red kangaroo can live to be 27 years old.

When Are Baby Kangaroos Born?

Why Are Baby Kangaroos Called Joey?

The term “joey” comes from the Aboriginal language of Australia. Joey means “ little animal”, but the term became most closely associated with kangaroos. The word came to be around the 1830s.

What Other Animals are Called Joeys?