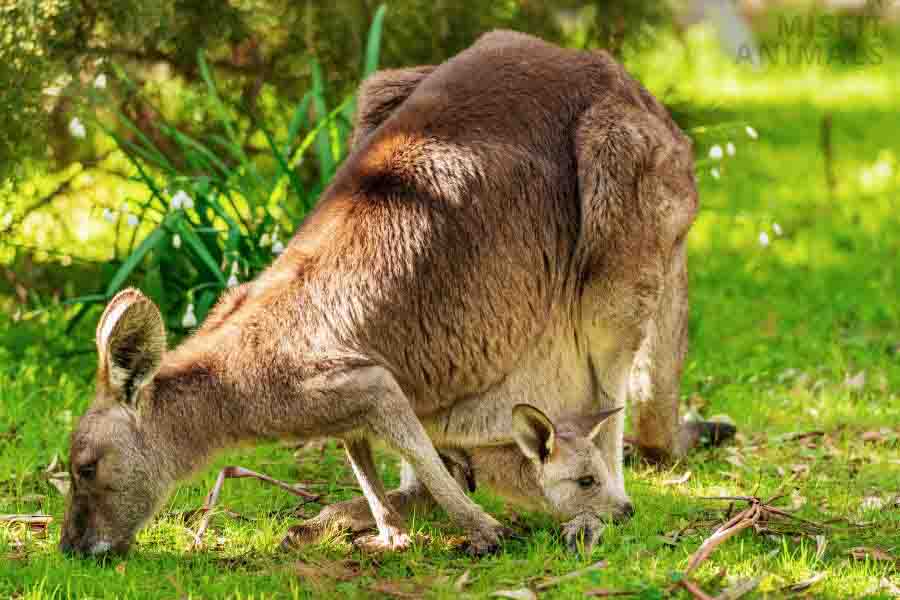 Kangaroos give birth to underdeveloped babies after around 30 days of gestation. Joeys climb into their mother’s pouch after birth and stay there until they can leave the pouch. Alphas and large males hold onto females while mating. Kangaroos mate all year round.

As one of the most unique animals, kangaroos have fascinating reproductional procedures. These animals are not only interesting for their jumping and strength but their mating habits as well.

So how do kangaroos mate? And at what age do they start to mate?

In this article, we discuss the above questions and more, including where, when, and how kangaroos mate.

How Do Kangaroos Give Birth? (Table)

Kangaroos give birth to a single underdeveloped, one-inch-long baby. After birth, the baby then crawls into the pouch and attaches itself to a teat. It won’t leave the pouch until it is at least six months old.

Most kangaroo species give birth after less than a month. The soon-to-be mother kangaroo sits down to groom her pouch after about 30 days of gestation.

Newborn kangaroo joeys emerge from a body opening called the cloaca. It is at the base of the mother’s tail.[1]

Kangaroos are underdeveloped at birth. They can only crawl up to their mother’s pouch and attach themselves to a teat.

Kangaroos do not lay eggs. They are viviparous, meaning females give birth to live babies straight out of their wombs

All marsupials are viviparous animals, including the kangaroo.[2]

Most viviparous animals’ embryos finish development in the womb. But marsupials are different: their newborns are essentially embryos and they finish their embryo phase postnatally (after birth).

Kangaroo Mating: How, When, Where, and at What Age?

Kangaroos mate for between a few seconds to ten minutes. Before mating, males chuckle around females and try to hold them until they give in. Most kangaroos mate between September and March

Kangaroos live in hierarchical groups called mobs. Male kangaroos brawl to gain the right to mate. Usually, only the alpha male is permitted to reproduce.[3]

Weak males that don’t want to fight will still try to mate. They sneak up on females when no other male in the mob is watching.[4]

How Do Kangaroos Mate?

Kangaroo males make a chuckling noise while courting females. Females may try to get away by wiggling, but male kangaroos are generally twice and able to control them.

The act can last from a few seconds to ten minutes.[5]

Kangaroo males will do the following when trying to mate:

When Do Kangaroos Mate?

Kangaroos mate all year round, but their most productive months are between September and March.

Most animals prefer to mate around Summer. In Australia Summer is in December, January, and February.[6]

Where Do Kangaroos Mate?

Kangaroos do not have a preferred mating place. They reproduce where they are at the time.

Kangaroos mate in their natural habitat:

There are several factors affecting when kangaroos reach sexual productivity:

Kangaroos are not monogamous. Both males and females have several mates throughout their life.

Kangaroos are polygamous animals. The alpha male of the mob is the only one permitted to mate and has several sexual partners.

Males can earn the right to mate by winning fights. As more males mate, the mob’s gene pool gets bigger. This reduces the chance of inbreeding.

How Do Kangaroos Choose a Partner?

Male kangaroos fight to earn the right to mate. If they are victorious, they will use scent to choose their sexual partner.

Females let stronger males mate with them. There is a higher chance for healthy offspring if they are fathered by a kangaroo with an impressive muscular physique.

Males who earn the right to mate use scent to choose a sexually active female. Females release pheromones to indicate their sexual activity.[7]

If the female is unwilling and escapes, the male will look for another one until they can find a mating partner.

How Long Is Kangaroos’ Gestation Period?

Kangaroos are pregnant for around 30 days. Babies develop in the embryo to the point where they are able to crawl into the pouch.

The time of gestation is different from species to species:

Do Male or Female Kangaroos Raise the Joeys?

Joeys are raised by their mothers. When males are around a year old, they start playfighting with other young males.

As kangaroo joeys are dependent on their mother’s milk and pouch, female kangaroos are the ones who raise the babies. Males do not have pouches or teats.

Kangaroos fight to earn the right to mate. Males search for sexually active females by smell and hold them down if they try to escape. Mothers are pregnant for around 30 days.

Joeys are born underdeveloped and they need to climb into the pouch. They do not leave the pouch for at least six months. Joeys are reliant on their mother’s nutrition and protection, and they are raised by their mothers.

Do Kangaroos Give Birth from the Pouch

No, kangaroos do not give birth from the pouch. Babies are born through the cloaca, which is found at the base of female kangaroos’ tails. After birth, the baby climbs up to the pouch. The pouch’s opening is in the middle of the belly.

Is the Kangaroo Pouch the Womb?

How Many Babies Can Kangaroos Have?

Kangaroos can have around eight babies throughout their life.[9] Mothers can raise three children separately: one that is out of the pouch and only goes back for milk; one that develops in the pouch and is around a year younger; and one in the womb waiting to be born in a state called embryonic diapause.[10]