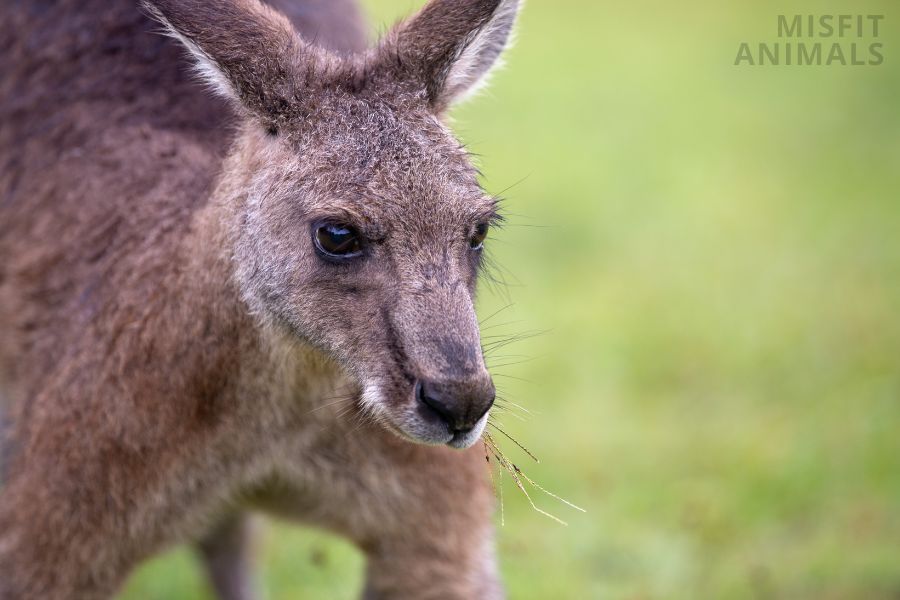 Kangaroos are muscular animals. They need to be strong for fighting, jumping, and carrying their babies. Kangaroos’ strength is determined by their genes, development, nutrition intake, gender, and exercise. Of all species, red kangaroos are generally the strongest kangaroo species.

When we think of kangaroos, we imagine buff animals flexing their muscles. They are so jacked that they are even associated with boxing in pop culture.

But how strong are kangaroos really? Why do they need to be strong? And how do they become so muscular?

In this article, we will explore everything you need to know about kangaroos’ strength and the source of their power.

How Strong Are Kangaroos?

Kangaroos are one of the strongest mammals. Their hind legs are especially muscular, as these are used the most for jumping and moving around. Male kangaroos are much stronger than females.

Kangaroos are so strong that they have only a few natural predators in their native region of Australia.[1] They can square up to most animals in their habitat.

Some even estimate that their muscles make up 50% of their total body mass.

With this strength, they also have a powerful kick. This is their most powerful weapon. The force of a kangaroos kick reaches up to 759 pounds.

Kangaroos have many tools at their disposal to fight. Some of their finest aspects are compared below.[2]

What is The Strongest Kangaroo Species?

Red kangaroos are generally the strongest of all kangaroo species. They are the largest and the heaviest kangaroos, which is why they have more powerful muscles.

There are six species in the genera Macropus and Osphranter that are specified as kangaroos:

Here is a comparison of the different kangaroo species’ leg strength.

How Are Kangaroos So Strong?

Kangaroos’ strength is determined by many factors, including development, nourishment, exercise, genes, and gender. Male kangaroos are stronger than females.

The harsh conditions of Australia made kangaroos evolve to be sturdy animals.

Still, there are several factors that hinder or improve a kangaroo’s strength:

Kangaroo joeys develop drastically during childhood. They grow from 0.03 ounces up to 40 pounds in less than a year.

But, they also rely solely on their mother for protection and nutrients.

Baby kangaroos develop in their mother’s pouch, sucking on her teats in the early stages of their development. If their mother is injured or malnourished, it could hinder the baby’s development.

If anything happens to the mother, the joey is less likely to realize its full strength.

Kangaroos exclusively eat vegetation. They need to eat a lot to develop muscles, especially in the early stages of life.

If an adult kangaroo eats less than about 2 pounds daily for a long time, it becomes weaker.

They need to graze upon the following foods to remain strong:[3]

The more a kangaroo uses their muscles, the more muscular it gets.

Kangaroos need daily movement to maintain and develop their muscles. They move about four miles daily and males often brawl against each other.

Like all living organisms, kangaroos’ strength is also heavily influenced by genes. There’s a higher chance for stronger offspring if a strong male and female mate.

Usually, only the alpha male is allowed to mate with the mob’s females, as he is the strongest male in the group.

Male kangaroos are much stronger than females on average. This is because males are the fighters and defenders of the mob. Females also offer protection but their main purpose is to tend to their babies.

Why Do Kangaroos Need to Be Muscular?

Wild kangaroos need their strength for many situations:

Kangaroos cover about four miles per day. To do this, they need endurance. They also need to outrun hostile creatures should they be attacked.[4] The stronger they are, the more power they can produce with their legs, resulting in improved running speed.

Kangaroos often fight to assert dominance. Males brawl over the title of alpha or the right to mate with females.

They also fight predators. Due to their muscular physique, few animals see them as prey.

Mothers carry their babies in their pouches. They get out occasionally at around six months old and they aren’t let back when they are 10-12 months old.

Mothers don’t let their joeys back in the pouch when they are too heavy. This can be as much as 22-24 pounds.[5]

Until then, mothers need to be strong enough to carry their children.

Kangaroos often fight with other creatures in their habitat. They can hold their own against most other animals, such as dingos. Some animals, like lions, are too strong for kangaroos.

Kangaroos are highly confrontational animals. They are disliked among many Australians and can get aggressive out of nowhere.[6]

There aren’t many creatures a kangaroo finds in the wild to fight with, but here are some interesting matchups:

A kangaroo is capable to fight and win against several dingoes at a time.[8] Dingoes are about two feet tall and five feet long, while kangaroos can be as tall as 6 feet.

The dingo’s most powerful weapon is its 1,500-pound of force bite. But they need to get close to bite, and that means the kangaroo can inflict a potentially lethal kick.

Kangaroos do not meet lions in the wild, but if they did, lions would win.

Lions are bigger and stronger than kangaroos. Although, they might suffer heavy injuries, as a kangaroo’s kick can break even a lion’s bones.

Lions slightly outrun the fastest of roos with a top speed of 50 mph. They also weigh more than kangaroos by about 500 pounds.

A gorilla would undoubtedly win against a kangaroo, although they do not meet in the wild.

Gorillas weigh up to 440 pounds, while kangaroos max out at 200 pounds. They also have better reach than kangaroos and their body fat could dampen a kangaroo’s kick.

As they have strong arms, a gorilla could also grab the kangaroo and either punch it (up to 2700 pounds of force) or bite it (1300 PSI)

Without tools, kangaroos would win against humans.

A kangaroo’s kick can easily shatter human bones and may cause fatal internal bleeding. It is unwise to fight against a kangaroo barehanded.

Although in hand-to-hand combat, kangaroos have the edge, humans have the ability to use tools, which gives us an immeasurable advantage over them. Because of this, humans are considered natural predators of the kangaroos.

Kangaroos are strong creatures in the animal kingdom. They have a bone-shattering kick, strong bite, powerful tails, and incredible agility and speed. Jacked kangaroos weigh around 200 pounds.

The strongest species is the red kangaroos. Although kangaroos win most of their fights in their native Australia, many animals are stronger than them around the world, like lions and gorillas.

What Was The Most Jacked Kangaroo Ever?

The most jacked kangaroo was a red kangaroo named Roger. It was an Australian icon known for its muscular physique, 6 feet 7 inches in height, and 200 pounds of weight. Roger was born in 2006 and died in 2018.

Are Kangaroos The Most Muscular Animals?

No, kangaroos aren’t the most muscular animals. Although their physique is impressive, elephants are the strongest animals in the world. Elephants can carry 2,100 pounds on their back, which is ten buff kangaroo’s weight.

Do Kangaroos Have The Strongest Kick?

What To Do if You Get Attacked by a Kangaroo?

If you feel like a kangaroo wants to attack you, move away slowly, avoid eye contact, make a short coughing sound, and don’t turn your back. If a kangaroo attacks you, you need to do the following: