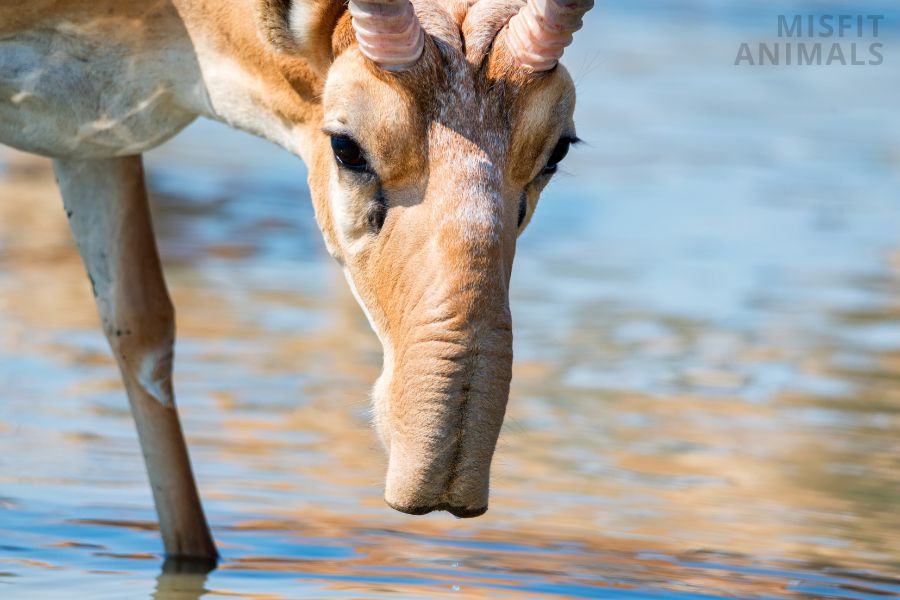 When you think of animals with trunks, elephants probably come to mind.

But there are many other creatures that have long, trunk-like appendages that help them survive in their environments.

From proboscis monkeys to tapirs, these animals have developed long facial appendages to help them thrive.

Elephants are not the only animals with trunks. They are accompanied by many others, either small or big, with trunks that allow them to eat, drink, and survive.

Here are 11 animals with trunks:

The giant anteater is a large, charismatic creature known for its ant-suction abilities. It has a long snout that it uses to sniff out ants and termites, which it then licks up with its tongue.

Many people think of the elephant when they think of animals with trunks, but the giant anteater has the longest trunk in proportion to its body of any mammal.

The giant anteater is native to Central and South America and is found in a variety of habitats including rainforests, grasslands, and urban areas[1]. It is a solitary creature, only coming together to mate.

Despite its impressive size, the giant anteater is timid. It is easily scared off by humans.

The elephant is a massive animal with a long trunk and is one of the most recognizable creatures in the world. Native to Africa and Asia, elephants are the largest living land animals on Earth. They are also some of the most intelligent animals, capable of complex emotions and behaviors.

Elephants have been revered throughout history for their strength and size. In many cultures, they are seen as symbols of wisdom and power.

They have also been used in warfare, labor, and transportation.

Today, elephants are endangered due to habitat loss and poaching. They are still used for labor and entertainment in some parts of the world, often seen in circuses.

The aardvark is characterized by its long, pig-like snout, large ears, and powerful hind legs. It is a nocturnal creature, spending most of its time underground in search of food.

The aardvark is a medium-sized, burrowing mammal native to Africa. It is the only living member of the family Orycteropodidae. Its closest living relatives are elephants, manatees, and dugongs.

Their diet consists primarily of ants and termites, which it catches using their long tongue, much like the anteater[2].

The aardvark is an important species in its ecosystems, as its digging helps to aerate the soil and its diet controls populations of destructive insects. The aardvark is also hunted by humans for its meat, which is considered a delicacy in some cultures.

Habitats inhabited by the aardvark include grasslands, woodlands, and savannas in sub-Saharan Africa. It is a shy and solitary creature, mostly active at night.

Due to its nocturnal habits and reclusive nature, the aardvark is one of the least-studied mammals in the world.

The elephant shrew, or sengi, is a small mammal native to Africa. Its name comes from its long, trunk-like nose, which is used for sniffing out food.

Elephant shrews are shy creatures that live in pairs or small families.

Not only do they have impressive facial appendages, they are also excellent jumpers. They can leap up to three feet into the air.

Despite their name, elephant shrews are not related to elephants. They are more closely related to primates like monkeys and humans. Scientists believe that the elephant shrew is a living fossil, meaning it has remained mostly unchanged for the past 50 million years.

Tapirs are large, herbivorous animals characterized by their long snouts. There are four species of tapir, all of which are native to Central and South America, as well as Southeast Asia.

Tapirs are the largest land mammals in their respective regions and can weigh up to 700 pounds.

Despite their size, they are shy and reclusive animals, mostly active at night. They are excellent swimmers and can hold their breath for up to five minutes underwater. Tapirs are also good tree climbers.

The tapir’s trunk is one of its most distinctive features. It is used for a variety of purposes, including foraging for food, communicating with other tapirs, and self-defense.

The trunk is also prehensile, meaning that it can be used to grasp and hold objects.

The elephant seal is a large mammal, with a long trunk, found near the coasts of California, Mexico, and Peru. It is believed that the Elephant Seal got its name from the fact that it looked like an elephant when it was first seen by European explorers.

Despite their size, Elephant Seals are excellent swimmers and can reach speeds of up to 25 miles per hour in short bursts.

They spend most of their time in the water, only coming ashore to rest and breed.[2]

The saiga has a number of unusual features, including its distinctive nose, which is highly sensitive to changes in temperature and humidity[3]. This allows the saiga to smell water from great distances and helps it to avoid predators.

The Saiga antelope is a critically endangered species of antelope that lives in the steppes of Central Asia.

They are well-adapted to their desert habitat and can go for long periods of time without drinking water.

They are also known for their annual migrations, covering up to 3,000 kilometers. These journeys are driven by the changing seasons and the need to find new grazing grounds.

The moth is an insect and one of the few with a trunk-like appendage. This long, prehensile appendage is used for grasping and manipulating objects, as well as for drinking and eating.

The moth’s trunk is an important tool for communication, both with other members of its species and with the outside world.

It is thought that the trunk is one of the main reasons that moths are such successful animals. The trunk allows the moth to reach food and water that would otherwise be out of its reach. It also gives the moth an extra sense of touch.

In addition, the trunk provides a way for the moth to hold on to its mate during breeding.

Wild Boars have long snouts used to root around in the ground for food. They also have sharp tusks used for defense and to dig.

The wild boar is a four-legged mammal native to Europe, Asia, and Africa. It is the wild ancestor of the domestic pig. They are omnivores and eat both plants and animals.

It is a social animal and lives in groups called herds. The herd is led by a dominant male. They are aggressive animals and defend their territory from other animals.

The Wild Boar is hunted by humans for its meat. It is also considered to be a nuisance by farmers as it roots around in the ground and destroys crops. Due to hunting, the wild boar is an endangered species. The population of the wild boar has declined due to habitat loss and hunting.

The shrew is a small, mouse-like mammal with a long, pointed snout. It is found in Europe, Asia, and Africa. The shrew is very active and has a voracious appetite. It eats insects, spiders, earthworms, and other small invertebrates.

The shrew is also known for its aggressive behavior. It is known to attack and kill animals much larger than itself, including snakes, rodents, and even birds. The shrew is a member of the family Soricidae, which includes all the true shrews. There are about 350 species of shrew in the world.

The shrew is a fascinating animal with many unique features. It is sure to continue to fascinate biologists and laypeople alike for years to come.

The Probiscis Monkey is a primate recognized by its long, pendulous nose. This appendage is an extension of the monkey’s upper lip, and it is thought to be used to attract mates. It is found only on the island of Borneo, where it inhabits swampy rainforests near rivers.

The Proboscis Monkey is an Old World monkey, meaning that it is closely related to monkeys found in Africa and Asia.

The monkey’s nose is not the only distinctive feature – Proboscis Monkey also has long, furry tails and webbed toes that help it swim. Males are much larger than females and weigh up to 30 pounds.

It is an endangered monkey species, due to habitat loss and hunting. Although the monkey is protected by law, its numbers continue to decline.

The Proboscis Monkey is eaten in some parts of Borneo, and the monkey’s body parts are also used in traditional medicine.

What Animal Has a Long Trunk?

The animal with the longest trunk is the elephant. The elephant’s trunk is an extension of its upper lip, and it is used for various purposes such as grasping objects, drinking, and producing sound. Elephants are found in Africa and Asia, and they are the largest land animals in the world. Adult elephants can weigh up to six tons.

What Is an Animal With a Short Trunk?

The animal with a short trunk is the tapir. The tapir is a hoofed mammal closely related to horses and rhinoceroses. Tapirs are found in Central and South America, and they are the largest land mammals in the region. Adult tapirs can weigh up to 700 pounds.