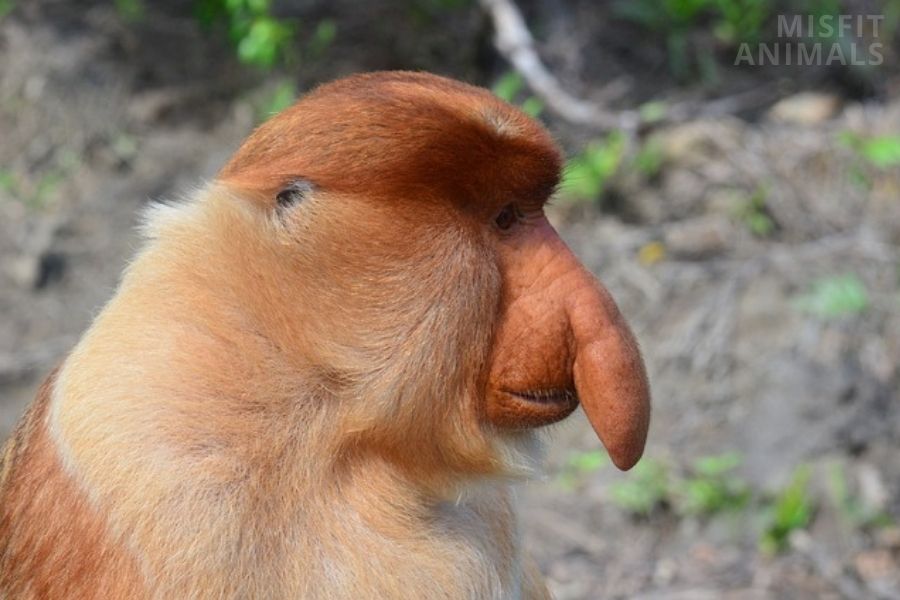 You may think that big noses are only found on humans, but you would be wrong. There are some extraordinary animals on earth that have oversized noses.

From elephants to monkeys, these animals have honkers that are downright impressive.

If you’re looking for facts (or photos), read on to learn about the animals with the biggest noses around.

Noses come in all shapes and sizes. Some are big, some are small, and some are in-between.

But what about animals with big noses?

Here are examples of animals with the biggest noses:

The aardvark is a medium-sized, burrowing mammal found in Africa. Its name comes from the Afrikaans word for “earth pig” or “ground pig”. The aardvark is best known for its long, tubular snout, which it uses to sniff out food.

Aardvarks are nocturnal animals and spend most of their time underground in burrows[1]. They are solitary creatures and only come together to mate.

As carnivores, aardvarks mainly eat ants and termites. They use their powerful claws to dig into termite mounds and then suck the insects up with their long tongues.

Sawfishes are a type of ray fish with a long, toothed “saw” (or nose) protruding from their faces. These saws reach up to one-third of the fish’s body length. Sawfishes use their saws to slash at prey, stunning or killing them.

There are two types of sawfish: the smaller freshwater sawfish and the larger oceanic sawfish.

Both types are currently classified as “endangered” by the IUCN Red List.

Sawfishes are found in tropical and subtropical waters around the world. They typically prefer shallow, muddy areas near river mouths and coastal mangrove forests.

Freshwater sawfishes are mainly found in rivers and lakes in Africa, Asia, and Australia. The largest populations are in the Amazon River basin and Western Australia.

Oceanic sawfishes are found in the open ocean and coastal waters. They have been spotted as far north as New York and as far south as Argentina.

The elephant is the largest land animal on Earth. These massive mammals are easily recognized by their trunk, a long, muscular tube they use for everything. They have one of the longest “noses” on earth, except it’s not a nose, but a trunk.

Elephants are native to Africa and Asia. They live in tropical and subtropical regions, including rainforests, savannas, and deserts.

Elephants are herbivores and mainly eat grass, leaves, and twigs[2]. They use their trunk to pluck food from trees and bushes.

They also drink a lot of water, up to 50 gallons per day. They suck up water with their trunk and spray it into their mouth.

The long-nosed bandicoot is a nocturnal creature, spending most of its time underground in burrows. It is a solitary animal and only comes together to mate.

They are omnivores and eat both plants and animals:

The long-beaked echidna is a small, spiny mammal with a long snout found in New Guinea and Australia[3]. It is one of only two species of echidna, the other being the short-beaked echidna.

The long-beaked echidna gets its name from its long snout, which it uses to sniff out food. They are also known as “spiny anteaters”.

As nocturnal animals, they spend most of their time during the day underground in burrows. When the night approached, they come out to eat.

The long-beaked echidna is an insectivore and mainly eats ants and termites. It uses its long tongue to lick up the insects, much like an anteater.

The proboscis monkey is a large, Old World monkey found in Borneo. It gets its name from its long, bulbous nose, which is used to attract females. Proboscis monkeys are also known as “long-nosed monkeys”.

Proboscis monkeys are found in tropical rainforests and mangrove forests. They are arboreal creatures and spend most of their time in the trees.

As omnivores, they eat both plants and animals. Their diet includes leaves, fruits, insects, small mammals, and reptiles.

Its believed that the long nose is used by males to attract females. The longer the nose, the better chances males have to find a mate.

The elephant shrew is a small, insectivorous mammal found in Africa. It gets its name from its long, trunk-like nose, which is used to sniff out food. Elephant shrews are also known as “sengis”.

Elephant shrews are found in woodlands and grasslands. They are shy creatures and spend most of their time hiding in the undergrowth.

They are mainly insectivorous, but they also eat other small invertebrates such as spiders and worms. They use their long noses to sniff out food.

The star-nosed mole is a small, insectivorous mammal found in North America. It gets its name from the 22 pink, fleshy “tentacles” that surround its nose. These tentacles are actually highly sensitive tactile receptors that the mole uses to find food.

Star-nosed moles are found in moist, forested areas. They spend most of their time underground in burrows.

They dig using their feelers on the nose, as they can’t see much. Their eyesight is so poor that they are almost blind.

Star-nosed moles are mainly insectivorous, but they also eat other small invertebrates such as spiders and worms. They use their tentacles to sniff out food.

The tapir is a large, herbivorous mammal found in Central and South America, and Southeast Asia. It gets its name from the Tapirus genus, of which it is the only member.

Tapirs are found in tropical rainforests and mangrove forests. They are shy creatures and spend most of their time hiding in the undergrowth.

Tapirs are herbivores and mainly eat grass, leaves, and twigs. They use their trunk to pluck food from trees and bushes.

As shy creatures, they hide most of the time, but they can be seen bathing in rivers and lakes.

The longnose gar is a large, predatory fish found in North and Central America. It gets its name from its long, narrow snout, which is used to snatch prey. Longnose gars are also known as “needlenose gars”.

Longnose gars are found in freshwater rivers and streams. They are solitary creatures and only come together to mate and eat.

They are predators and mainly eat fish, but will also eat amphibians, reptiles, and small mammals if given the opportunity.

They use their long snouts to snatch prey.

The elephant seal is a large, marine mammal found in the Southern Hemisphere. It gets its name from its long, trunk-like nose, which is used to breathe through. Elephant seals are also known as “sea elephants”.

Elephant seals are found in the oceans around Antarctica and on the coasts of New Zealand and Tasmania. They are social creatures and often gather in large groups on beaches.

Their name comes from their resemblance to elephants due to their trunk-like nose.

Elephant seals are marine mammals and mainly eat fish. They use their long noses to breathe through while they swim underwater in search of food.

What Are Some Animals With Big Nostrils?

Some animals with big nostrils include the elephant, rhinoceros, and hippopotamus. These animals have large noses that help them breathe in large amounts of air. This is necessary because they live in hot climates and need air to cool down their bodies.

Why Do Some Animals Have Big Nostrils?

Animals with big nostrils developed this trait because they need to breathe in large amounts of air. This is necessary for these animals because they live in hot climates and need to cool down their bodies.

What Is the Rat-Like Animal With Long Nose?

The rat-like animal with a long nose is a shrew. Shrews are small mammals that look like rats. They have long noses that they use to sniff out food. Shrews are found all over the world and live in a variety of habitats.

What Animal Has the Longest Nose?

What Animal Has the Biggest Nose?

The sperm whale has the biggest nose. The sperm whale is a marine mammal found in all oceans of the world. These whales are known for their large noses, which can be up to 2 m long. The sperm whale uses its nose to store oil, which it uses as a source of food.

What Is the Animal That Looks Like a Pig With a Long Nose?

The tapir is a large, plantigrade mammal with an odd-looking nose protruding from a short snout. The body is relatively compact, and both front and hind limbs have four toes. Their look similar to pigs.