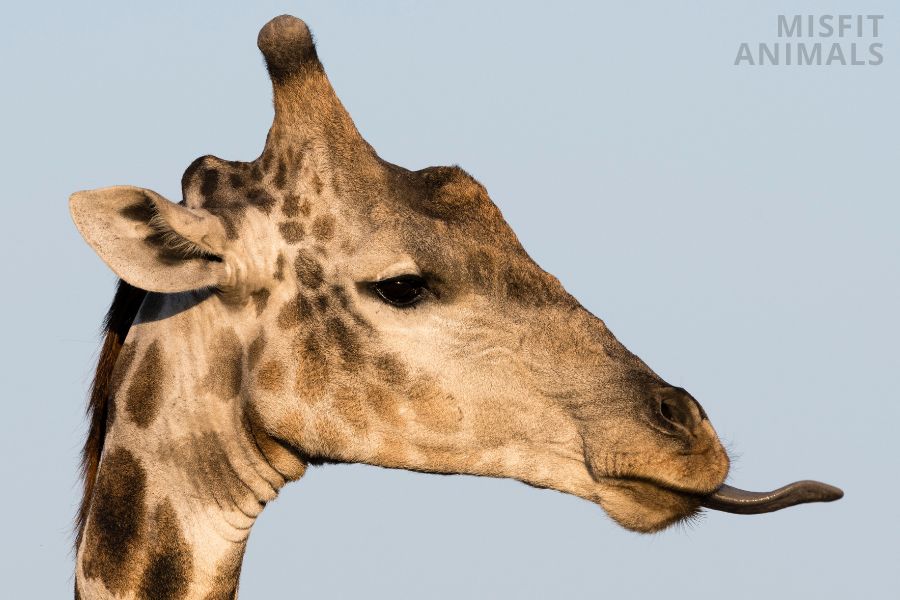 When you think of animals with long tongues, what comes to mind? A snake? A lizard? While those creatures do have long tongues, they’re certainly not the only ones. In fact, there are quite a few animals out there with lengthy lickers that will surprise you. Read on to learn about some of them!

There are plenty of animals out there with some impressive tongue skills. Some are small, others are large, but the common denominator is their long tongues.

Here are some of the animals with the longest tongues:

Chameleon tongues are among the longest relative to body size in the animal kingdom. A chameleon’s tongue can be up to double the length of its body.[1]

This adaptation allows them to capture prey that would otherwise be out of reach. Their tongues are also prehensile, meaning they can grip and hold onto their prey.

Giraffes have one of the longest tongues of any land mammal. A giraffe’s tongue can reach up to 20 inches long[2]. They need long tongues to reach the leaves high up in trees.

Not only do they have long tongues, but they also have long necks and limbs. A giraffe’s neck can be up to 8 feet long, which is taller than almost all people. Giraffes use their necks to reach leaves that other animals can’t reach.

Giraffes are native to Africa and can be found in many different African countries. They are herbivores and primarily eat leaves from trees.

Giraffes are the tallest land mammal and can grow to be up to 18 feet tall.

The giant pangolin is covered in scales, with a long prehensile tongue, native to Africa. These creatures are nocturnal and spend most of their time in trees.

Despite their name, Giant Pangolins are not particularly large. They grow to be between 2 and 3 feet long, with males being slightly larger than females. They weigh between 20 and 35 pounds.

Pangolins are covered in tough, keratinous scales that protect them from predators. These scales are made of the same material as human fingernails and hair. The scales cover the animal’s entire body, except for its underbelly.

Though the Gila monster is feared by many people, it is a timid creature that poses little threat to humans[3]. It is a slow-moving lizard that spends most of its time hiding in burrows or under rocks.

When it does come out, it is only at night. It still avoids contact with humans if possible.

The Gila monster is easily identified by its bright coloration. It has a dark shade of orange or red, with black spots or bands. The lizard’s skin is covered in small, bead-like scales, which give it a rough, pebbled appearance.

The lungless salamander is a type of amphibian that does not have lungs. Instead, it breathes through its skin. These salamanders are found in North America and Europe, and their diet consists mainly of insects.

While they don’t have lungs, they do have a long tongue. Their tongues are up to twice the length of their body. They use their tongue to catch prey.

When they see an insect, they flick out their tongue to capture it.

Lungless salamanders can live in a variety of habitats, from forests to caves. They are also good swimmers and are often seen swimming in ponds and streams.

Scaly anteaters, called Pangolins, are mammals of the order Pholidota. The one extant family, Manidae, has three genera:

The scaly anteater’s scales are made of keratin, the same substance found in human fingernails and hair. Scaly anteaters are nocturnal animals. They live in hollow trees or burrows, depending on the species.

The diet of different pangolin species varies, but all pangolins have one thing in common: ants and termites make up the bulk of their diet.

Scaly anteaters use their long tongues to reach into ant and termite nests.

They are hunted for their meat and scales. In some parts of the world, pangolin meat is considered a delicacy. The scales are used in traditional Chinese medicine.

The sun bear is a small bear found in the tropical forests of Southeast Asia. It is the smallest member of the bear family and is distinguishable by its long tongue, which can reach up to 18 inches long.

Sun bears are omnivorous, and their diet consists of fruits, honey, insects, and small vertebrates.

They are solitary animals, and they spend most of their time in trees. They are good climbers, and their long tongues help them to reach into crevices to find food. They also rest in trees, where they are safe from other predators.

Sun bears are threatened by habitat loss and hunting. The sun bear population has declined by up to 30% in some areas, and the species is listed as vulnerable on the IUCN Red List of Threatened Species.

The Giant Leaf-Tailed Gecko is a species of gecko found in Madagascar. As its name suggests, this gecko has a large, flat tail that resembles a leaf. This adaptation helps the gecko blend in with its surroundings and avoid predators.

The Giant Leaf-Tailed Gecko is also known for its long tongue. This tongue extends up to twice the length of the gecko’s head and is used to capture prey. It is sticky, allowing it to catch insects and other small animals easier.

This is a nocturnal creature, meaning it is active at night. During the day, it rests in trees or on the ground, camouflaged by its leaf-like tail.

As an endangered species due to habitat loss and deforestation in Madagascar, there aren’t many geckos left. They are also hunted for their meat, which is considered a delicacy in some parts of the world.

The Blue-Tongued Skink is a species of Old World skink known for its blue tongue. These lizards are found throughout Australia and New Guinea.

Blue-tongued skinks are relatively large skinks, with adults reaching lengths of up to 24 inches (61 cm). They are stout-bodied lizards with short legs and long tail.

They are mostly herbivorous, feeding on fruits, vegetables, and other plant matter. They do occasionally eat small insects or other invertebrates.

The skink is diurnal, meaning it is active during the day. They spend much of their time basking in the sun.

Blue-tongued skinks are popular pets due to their docile nature and striking appearance. They make great pets for first-time reptile owners.

The alligator snapping turtle has a tongue as long as its body. The turtle uses its impressive appendage to lure in prey.

The alligator snapping turtle is a large, predatory reptile that can be found in freshwaters throughout the southeastern United States. They get their name from their powerful jaws and long, sharp teeth, which allow them to capture and kill prey.

The alligator snapping turtle’s tongue is black, sticky, and lined with small hooks. They stick their tongue out of their mouth and wag them back and forth to attract fish.

What Animal Has the Longest Tongue?

The giant anteater has the longest tongue in the animal kingdom. This creature can extend its tongue for up to 45cm. The next longest tongues belong to chameleons and certain kinds of lizards, which can extend their tongues for up to 30cm.

Do All Animals Have Tongues?

No, not all animals have tongues. The starfish is one example of an animal that does not have a tongue.

What Animals Don’t Have Tongues?

There are many animals that don’t have tongues including echinoderms and crustaceans. They are born without tongues because they have no need for one.

What Animal Has the Dirtiest Mouth in the World?

The Komodo Dragon has the dirtiest mouth in the world. These creatures are known to harbor more than 60 different types of bacteria in their mouths.

What Mammal Has the Biggest Tongue?

The Giant anteater has the longest tongues among mammals.

Do All Mammals Have Tongues?

Yes, all mammals have tongues. This includes human beings. The tongue is an essential muscle that helps us eat and speak. Most animals use it to drink and eat.

What’s the Purpose of a Tongue?

The tongue has many functions, including helping us to eat and drink, assisting with speech, and keeping our mouths clean.

What Animal Has a Black Tongue?

One of the animals that has a black tongue is the giraffe. The giraffe’s tongue is about 18 inches long and is black in color.

What Animal Has the Longest Tongue Relative to Its Total Size?

The chameleon has the longest tongue relative to its size. These creatures can extend their tongues up to 28 inches (70 cm) long, which is up to double their body length.

What Animal Can Clean Its Ears With Tongue?

The giraffe can clean its ears with its tongue. The giraffe’s tongue is about 18 inches long and is able to reach inside the animal’s ear to clean it out.