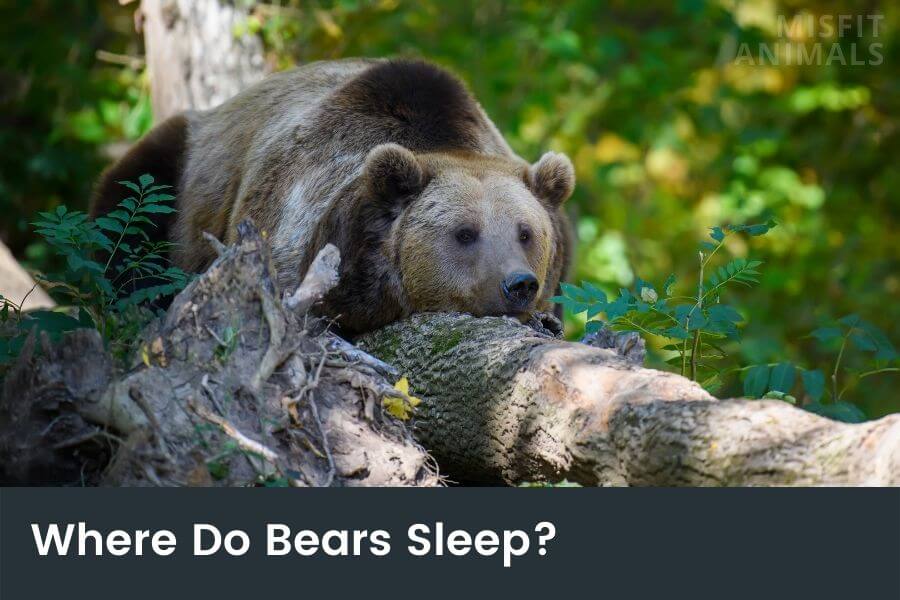 Bears either sleep in dens, on the ground, out in the open or in trees, depending on the purpose of their sleep. When hibernating, they’ll reside in a den, but while taking a nap, some bears sleep in trees.

Do you know where bears sleep?

Most people think that all bears sleep in dens, but that is not always the case. In fact, their sleeping arrangement changes depending on the circumstance.

In this article, we’ll discuss where bears sleep at night, during hibernation, and during napping.

We’ll also talk about their sleeping pattern, to give you a better understanding of how bears sleep as they do.

Where Do Bears Sleep?

In the spring, summer, and autumn, bears sleep on the ground, or anywhere they feel safe. During hibernation, bears sleep in dens. Some bears do sleep in trees, but only when resting or napping.

Bears are adaptive animals that can sleep in almost any place.

There are a few factors that affect bears’ sleeping arrangement:

If it rains or snows, they seek cover under bushes, logs, rocks, or trees.

Apart from sleeping in the traditional sense, bears also hibernate. This is a process where bears sleep for 3-7 months during the winter[1]. Their heart rate slows down, and they don’t use any energy.

When hibernating, they sleep in dens. They normally choose a den in a safe, cool, dark spot.

Where Do Bears Sleep at Night

Bears sleep where they feel safe at night. A bear will rest on the ground, in trees, and even rock caves where they won’t be disturbed while sleeping.

Bears prefer to sleep where it is cool, dark, and safe.[2]

For most bears, this is somewhere on the ground, when they’re turning in at night. They’ll typically sleep under trees, logs, rocks, or somewhere else where they can find shelter.

They may also fall asleep in meadows.

It’s important to note that not all bears sleep at night. More on that later.

Do Bears Sleep in Trees?

Some bears do sleep in trees, but only when resting or napping.

There are several species of bears that will rest in trees, including sun bears, spectacled bears, black bears, and sloth bears. The most common is the sun bear though, as these are small and great climbers.

Brown bears, grizzly bears, and polar bears have been known to climb trees to catch prey, but they do not typically sleep in them. They’re simply too large.

Related: Do Bears Sleep in Trees?

Where Do Bears Sleep When Hibernating?

Bears sleep in dens that they make themselves when hibernating, as well as in hollow trees, caves, and dens built by other bears. A den can be built in 3–7 days.

Bears hibernate in dens. They sleep in dens made out of hollow trees, logs, or caves, where they are safe from predators while they hibernate.

Some bears make their own dens, while others reuse old dens.

They like to hibernate somewhere isolated where no other animals can find them easily. These are places such as abandoned trees, caves, or similar places.

If you want to find den sites, you can do so here.

Where Do Different Bear Species Sleep?

Where Do Polar Bears Sleep?

Polar bears don’t hibernate. Hence, they typically don’t sleep in dens. They’re also the largest land mammals in their habitat, so they don’t worry about predators.

These large bears have incredibly thick skin, and fur, which keeps them warm. Hence, they sleep on (or in) the ground, in small pits that they dig in the snow.

Polar bears sleep for 7-8 hours at night. They also take small naps throughout the day to recharge, especially on warm days.

Where Do Black Bears Sleep?

Black bears sleep on the ground throughout the spring, summer, and autumn. In the winter, they hibernate in dens.

Some black bears create their own dens, but most uses abandoned caves. That way they can save energy.

Den entrances vary in height from a few inches to several feet and can be dug in several ways. Black bears are known to build leaf and branch beds inside their dens.

These bears will also take naps in trees throughout the day.

Where Do Grizzly Bears Sleep?

Grizzly bears hibernate in the winter. They typically stay in their winter dens until May or June. Their dens are usually made at the base of large trees, most often in dense vegetation.

During the night, grizzly bears sleep on the ground, in a cave, under trees, or in meadows.

These bears can both be nocturnal and diurnal, meaning they’re either active at night or day. They’ll take naps throughout their active period.

When Do Bears Sleep?

Bears sleep a lot. They’re large animals, and hence use a lot of energy, which they have to recharge.

They generally have three different types of sleep:

Are Bears Nocturnal, Diurnal, or Crepuscular?

Bears can both be diurnal, crepuscular, or nocturnal, however, most bears sleep at night and are awake during the day (diurnal).

The grizzly bear is the only species of North American bear that is considered to be able to be truly nocturnal. These can be both nocturnal or diurnal, but they will never switch between the two.[3]

Black bears are mostly crepuscular, but they can adapt to different lifestyles depending on where they live and what food is available.

How Long Do Bears Sleep in the Spring?

On a normal spring day, bears tend to sleep 4-6 hours at night, and 1-3 hours throughout the day.

Bears wake up from hibernation in late winter or early spring, depending on the temperature. During spring, they follow their regular sleeping schedule.

In the spring, bears are more active and spend less time sleeping because they need to hunt for food in order to gain weight.

Do Bears Sleep in the Summer?

Bears will typically sleep at night, as well as take naps throughout the day in the summer.

During the spring, summer, and autumn months, bears will sleep on the ground or wherever they feel safe. This includes trees, but typically only when resting or napping.

In the summer, during the warm days, bears tend to sleep more (compared to spring and autumn). They spend more energy walking around when it’s hot, and as they don’t have sweat glands, they get very hot.

Hence, they like to cool off in the shade while resting.

Are Bears Active in the Fall?

Yes, bears are active during autumn, however, they prepare for hibernation during this time.

At this time of year, bears will eat more, hunt more, and search for a den. The black bear even migrates to find more food before going into hibernation.

Bears sleep in dens during hibernation, but they sleep out in the open on a daily basis. Some bears also sleep in trees, such as the black bear, sun bear, and sloth bear, however, they typically only do so when napping.

As for the dens, they either make them themselves (which takes anywhere from 3 to 7 days) or reuse old dens.

Bears typically follow a regular sleeping schedule during the spring, summer, and autumn months. They will sleep for up to 20 hours per day.