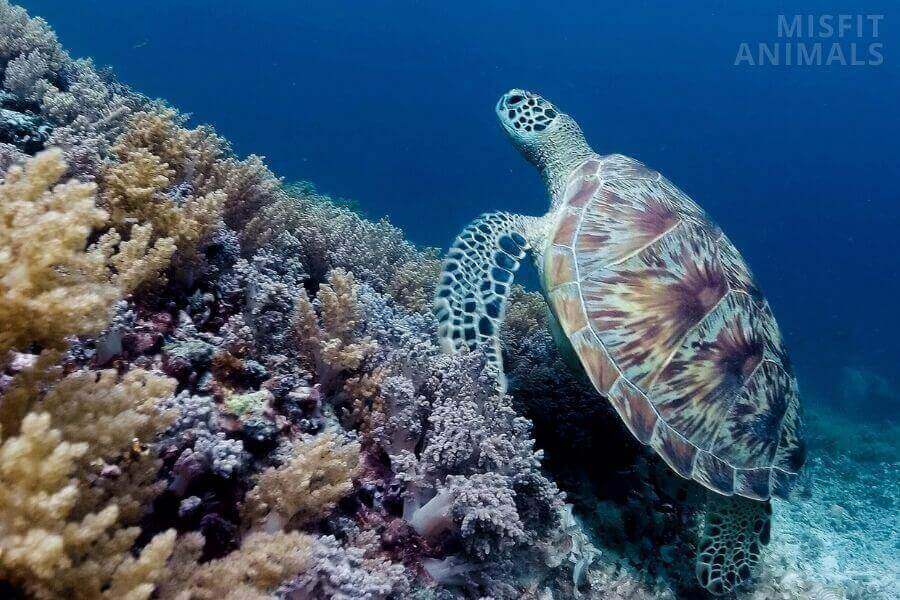 Sea turtles are ancient creatures, having been on Earth for over 110 million years. Over time they’ve adapted perfectly to their marine environment and become one of the oceans’ most majestic inhabitants.

While nearly everyone knows about sea turtles, very few are fortunate enough to see one in the wild.

There’s a lot more than meets the eye to these creatures, so we’ve compiled a list of the top 10 most fascinating facts about sea turtles that will leave you in awe.

1. Sea Turtles Inhabit All Oceans of The World

There are seven species of sea turtle:

Of these, only the flatback nest exclusively on Australian shores.[1]

The other six species are found throughout the world’s oceans. Many species are migratory, following the warm currents and food sources. Their adaptive natures have spread them out across the world, found in every ocean except for the Arctic.

Sea turtles have some of the strongest lungs in the animal kingdom. They’re able to hold their breath for up to 5 hours at a time when swimming long distances underwater or resting on the ocean floor.

They can dive over 1,000 feet under the surface (300 meters), although most dives are shallower than this.

Diving deeper for longer periods puts a lot of strain on a sea turtle’s heart and other organs. To help cope with this, their hearts slow down when they’re swimming deep, and they have more red blood cells than any other reptile to carry more oxygen around their bodies.[2]

Jellyfish are the primary food source for adult sea turtles. The hawksbill and the leatherback sea turtle have both adapted to feed on these creatures almost exclusively.

Other sea turtles eat a wide variety of prey, including mollusks, crustaceans, fish, and seaweed.

To protect themselves from the vicious sting of the jellyfish they eat, sea turtles have a thick keratin beak and strong jaw muscles.

4. Their Mouth is Full of Barbs

While sea turtles have a cute outward appearance and docile nature, the insides of their mouth look like something of an apex predator.

The mouth and throat have lines of sharp, backward-facing barbs made of keratin. These help the turtle to catch, grip, and tear its prey into manageable pieces.

It also holds their food in position while they expel excess seawater.[3] This is why plastic bags are a threat to the species. They are mistaken for plastic bags and gobbled up. They cannot push the trash back.

5. Much of Their Life is a Mystery

Sea turtles have been around for over 110 million years, but scientists still know little about their lives. We know that sea turtles spend most of their lives in the ocean and only come ashore to lay eggs.

After hatching, the baby sea turtles immediately head back into the ocean. It can be years before they return to the shore again. This time is called “the lost years” as we have no idea where they go or what they do.[4]

6. They Excrete Salt Through Their Eyes

One of the most fascinating facts about sea turtles is that they excrete salt from their eyes. They have a gland located behind their eyes that helps to remove the salt from the ocean water they consume.[5]

The excess salt is then expelled through tears that run down their face.

This is why you’ll often see sea turtles with a tell-tale line of dried salt on their face.

7. Not All Sea Turtles Have a Hard Shell

The leatherback sea turtle is the only sea turtle species that doesn’t have a hard shell. Instead, their carapace (upper shell) is a layer of tough skin and oil which helps to make them more hydrodynamic, and agile, swimmers.

Their soft shells also make them more flexible, allowing them to eat a wider variety of prey than their hard-shelled cousins.

Related: Can Sea Turtles Go In Their Shell?

Sea turtle hatchlings have a high mortality rate, with only 1 in 1,000 making it to adulthood[6]. From the moment they emerge from their shells, they are targets for predators, both on land and in the sea. Their small size and soft shell make them an easy snack for birds, crabs, raccoons, lizards, and even other turtles.

If they do make it to the water, they still face dangers from fish, sharks, killer whales, and stingrays. The open ocean has few places for a small turtle to hide, and making it to adulthood is a matter of luck.

Sea turtles have temperature-dependent sex determination, which means that the sex of the hatchlings is determined by the temperature of the sand during incubation.

With global temperatures on the rise, there is a worry that we could see an increase in the number of female turtles being born. This could have a devastating effect on sea turtle populations as it would eventually lead to fewer males being born.

Not to mention the other effects of climate change, such as rising sea levels, beach erosion, and ocean acidification, which also threaten the future of these creatures.[7]

10. All Seven Species of Sea Turtles Are Endangered

All seven species of sea turtles are listed as “Endangered” or “Vulnerable” by the IUCN. The main threats to their survival are habitat loss, climate change, pollution, and hunting.

Despite being protected by law, sea turtles continue to be hunted for their meat, eggs, and shells. In some parts of the world, their eggs are considered a delicacy and can fetch a high price.

Thankfully, many organizations are working hard to protect these creatures and ensure their survival into the future.

Related: Can You Keep A Pet Sea Turtle?

You Can Help Protect Sea Turtles

There are many ways you can help protect sea turtles and other marine life.

The best thing you can do is to reduce your plastic consumption. Plastic pollution is one of the biggest threats to marine life, and sea turtles are particularly susceptible as they often mistake plastic for food.

You can also help by supporting organizations working to protect sea turtles and their habitat. And, of course, you can always visit a turtle conservation center on your next vacation.

Here are some other ways you can do your bit to protect sea turtles:

Most importantly – share all the new turtle facts you know with your friends.

Where Do Sea Turtles Live?

Sea turtles are in oceans all over the world. They tend to congregate in warmer waters near the equator.

How Much Does a Sea Turtle Weigh?

Sea turtles come in all shapes and sizes, but they all share some common features. They have a large, hard shell that protects their bodies, flippers instead of legs for swimming, and a long tail.

What Do Sea Turtles Eat?

The diet of a sea turtle depends on the species. Some turtles are carnivorous and eat fish, squid, and crustaceans. Others are herbivorous and eat seaweed and seagrasses.

What Climate Do Sea Turtles Live In?

How Long Do Sea Turtles Live?

The lifespan of a sea turtle varies depending on the species. Some turtles can live for over 100 years, while others only live for around 50 years.