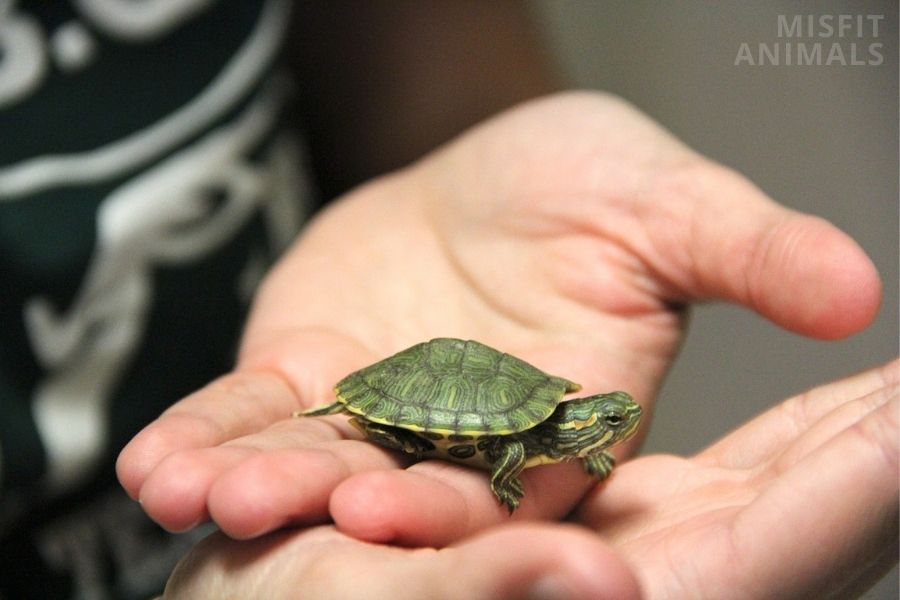 Many new turtle owners have been caught in the trap of adopting a teeny turtle, only for it to outgrow its tank. Owners can be hit with unexpected bills for purchasing a new tank and higher food costs.

Fortunately, many popular pet turtle species stay small. Purchasing any of these species means you know what to expect as the turtle grows.

Looking for a tiny turtle? Here are some of the most popular pet turtles that stay small:

The red-eared slider is arguably the most popular pet turtle. They are a top pick due to their relatively low maintenance requirements (compared to other pet turtles) and small to medium size.

This breed is not as small as some of the other turtles on this list but still remains manageable. They make a colorful and fun addition to the home without taking up significant space.

The tiny mud turtle only reaches up to 3–5 inches, but their domed shells make them appear more prominent than other, flatter turtles.

Despite their small size, the mud turtle can reach ages of 50 years. While they need fewer space requirements than other turtles, they require a lifelong commitment from prospective owners.

As their name implies, the spotted turtle is distinguished by yellow spots covering their dark shells and heads. This species is under threat in the wild,[1] but captive populations are plentiful, so sourcing a pet is easy.

Spotted turtles are sexually dimorphic. The female grows larger than the males, reaching lengths of up to 7 inches compared to the males 5. This small size, coupled with their even-tempered nature, makes them a great pet.

Don’t be put off by the unfortunate name of this turtle species. The musk turtle gets its name from emitting an odor when threatened. If well-cared for, the musk turtle doesn’t smell bad.

They are a hardy species that can tolerate average conditions, making them a perfect pet for beginner turtle owners who are still learning about reptile care. Be wary that this species is a great climber, so provide them with an extra secure enclosure.

This little turtle is a widely popular pet in China, Japan, and Taiwan. Their appearance is plain aside from three distinct ridges running the length of their shell.

Despite this unremarkable look, the Reeve’s turtle is beloved for its docile nature, energetic activity in the tank, and adorably small size. The only drawback is they are fairly poor swimmers, and the tank setup should provide plenty of rest areas and shallow water.

The bog turtle is a stand-out species of miniature turtles. Splotches of orange on either side of their head sets them apart from other similar small, dark species.

Native to the eastern US, bog turtles are declining in the wild due to habitat loss. They remain prevalent in captivity. Ensure that your bog turtle was bred ethically in captivity and not poached from the wild.

Box turtles are a primarily terrestrial turtle species. They still belong to the group of pond turtles, so they are not considered tortoises, although they have similar behaviors.

This preference for the land means that the box turtle needs a larger sized tank to offer adequate space. Unlike the multidirectional use of water habitats, usable space is limited on land.

The male eastern box turtle has spectacular red eyes that distinguish them from the females and other pet species.

What Are Small Turtles Called?

There is no distinct group of turtles that are biological differences in size. Many common species of turtle are small and are referred to informally as:

The tiny speckled padloper turtle is smaller than other little turtles by a mere inch. While it is kept as a pet in some countries, it is illegal in others—including the United States.

Fortunately, many other turtles are almost as small as the speckled padloper. Musk and bog turtles are the smallest turtles you can get as a pet.

Turtles are not affectionate or interactive like traditional pets but make excellent hobby pets. Small turtles make good pets due to their easy-care nature and lesser requirements than larger species.

Mini species of turtles can make excellent pets. They are perfect for beginner reptile owners due to their lower maintenance care needs.

Most small turtles physically need less space than larger species. They can happily live in tanks not suitable for bigger species, making them an excellent choice for bedrooms or apartments.

A tiny turtle produces less waste than its larger counterparts. Waste accumulates slower with a smaller turtle in the same sized tank as a bigger species, meaning less cleaning is required.

Housed in a comparatively smaller tank, the cleaning frequency for small turtles is much the same.

A smaller tank means lower maintenance costs. Lower capacity bulbs in UV and heat lamps and economical water filters can reduce the power required to maintain a turtle’s enclosure at the optimum conditions.

Small species of turtles require less food to power their bodies. Sourcing food for turtles can become costly, especially if the species has a particular diet. Mini turtles can reduce the food bill as food rations last longer.

Many first-time owners are surprised by how strong a turtle is. If improperly handled, turtles can kick their way out of your grip, and resulting falls cause serious injury.

Handling a smaller turtle is easier for inexperienced owners as they do not have the same physical capabilities as other species.

The lists of most popular turtle species include most of the smallest kinds. It’s no wonder tiny turtles are so sought after; they are easier to care for and extra adorable. The prevalence of little turtles in the pet trade means they are commonly bred and traded, making them cheap and easy to find.

Caring For a Small Pet Turtle

The basis of care is much the same for a small turtle species as it is for any other turtle. They require particular environmental set-ups to provide UV and heat[2] and a diet that closely resembles their natural one.

There are a few unique things to consider when it comes to small turtles compared to large turtles.

Small species of turtles have lesser space requirements. While it’s true that tiny species don’t need as much space, it doesn’t mean they should be in confined spaces.

The minimum recommended tank size is a guideline for turtle owners. Provide a larger size to offer the best welfare. Increased space allows turtles to engage in natural behaviors. This keeps them physically and mentally healthy.

Bigger animals tend to live longer in the animal kingdom.[3] While it’s true that the largest species of sea turtles are estimated to live up to 80 years or more, smaller pet turtles also have significant life spans.

Turtle owners must be aware of the long lifespans of even the tiniest of turtles. Bringing an animal into the home signifies a commitment to care for it all of its life.

The United States has banned the sale of any pet turtle under 4 inches as pet turtles closely link to salmonella outbreaks.[4] From these instances, the majority were small turtles.

Larger turtles carry the same health risk, but smaller individuals are more likely to be handled by humans, particularly vulnerable children, due to their size.

Do your research on your local state or country regulations about any pet turtle you are interested in owning.

How to Tell The Gender of a Turtle

Male turtles are usually smaller than female turtles. If you want a smaller turtle, then opt for a male. You can identify a male by shell shape, claw length, tail length, or coloration.

Any gender of a small turtle is a lovely small pet. But if you are looking to get a turtle as small as possible, buy a male. Female turtles are larger than their male counterparts, an adaptation that allows them to carry large clutches of eggs.[5]

This size difference is not apparent when turtles are babies (when they are often purchased as pets). To tell the gender of a turtle, you can use the following sexually dimorphic traits:

The plastron (bottom) of a turtle’s shell can indicate the individual’s sex.[6]

Males have an inwardly curved plastron that allows them to mount the curvature of a female comfortably. The females do not display any curving plastron; instead, it is flat and straight, giving the female more internal space to carry eggs.

There is a difference in front claw lengths between male and female turtles. It’s easy to assume the females would have longer claws to dig and bury eggs, but the opposite is true. The males have long claws to help them hold onto the female during mating.

Male turtles have have longer, thicker tails than females. If the tail only just sticks out from the shell, it’s likely a female, while a long tail belongs to males. This difference is due to their genitalia, which emerges from the cloaca for mating.

Take a look under your turtle. In females, the cloaca is near the base of the tail, while the male cloaca is closer to the tip.

Although rare, some turtle species display sexual dimorphism in their coloration. For example, the male ornate box turtle has bright red eyes while the females are brown.

Research the specific gender differences of your turtle species to help you determine the sex.

Can Turtles Live in a 10-Gallon Tank?

A 10-gallon tank is not large enough to house an adult turtle of any species, even a small one. Ten gallons may be suitable for baby turtles to stay temporarily. They should be moved to a tank that holds at least 30–40 gallons as they grow. A small tank can momentarily hold a turtle while cleaning their larger tank or as an intermediate home while sourcing something more suitable long-term.

What Is The Most Common Pet Turtle?

The most common pet turtles are the red-eared slider, box turtle species, painted turtle, and reeve’s turtle. These are aquatic or semi-aquatic species as fully terrestrial turtles (tortoises) are less desired as pets, perhaps due to their more significant space requirements.

Small turtles can bite. Don’t underestimate their power due to their size. They are not innately aggressive pets but bite when threatened. Limit handling of them to reduce the risk of being bitten.

Do Turtles Stay Small in a Small Tank?

A common misconception of pet turtles is that they only grow to fit the size of their given tank. This rumor may have emerged from turtles kept in too-small tanks suffering mentally and physically, impacting their growth rates, resulting in smaller turtles. The more space offered to a pet turtle, the better.

Some turtle species and sizes are illegal. In the United States, turtles under 4 inches in length are not allowed as pets. There is a connection between pet turtles and salmonella outbreaks. Smaller turtles are mostly to blame for these outbreaks. Because of their size, smaller turtles are more likely to be handled by humans, especially children, increasing this health risk.

How Long Do Mini Turtles Live?

Their tiny size does not impact turtles’ lifespans. Popular mini turtles can still reach ages of up to 50 years.