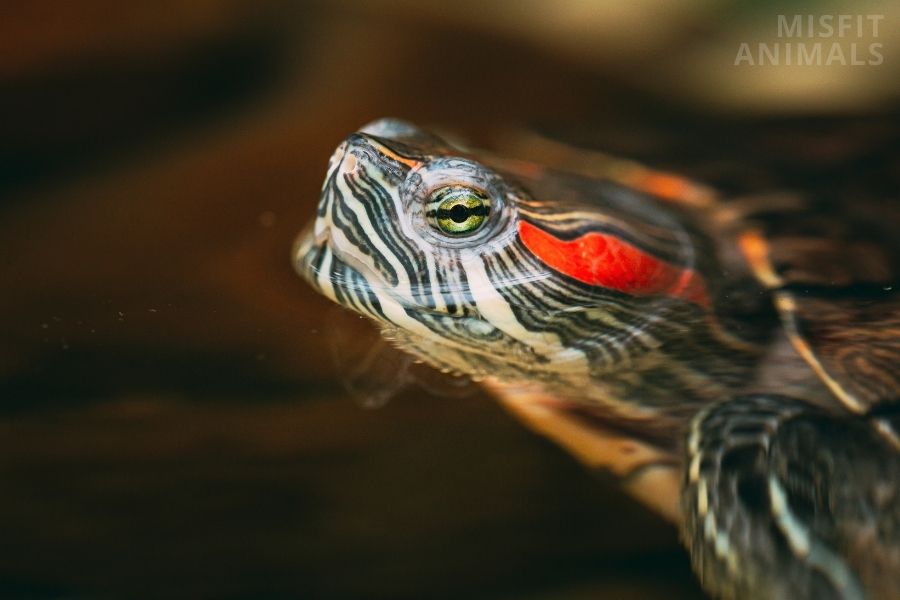 Red-Eared Sliders are among the most popular species of pet turtles. They have colorful markings, fun and active natures, and are tolerant of many environments.

Released in places far from their natural range, their adaptability has made them an invasive species in many areas.

Despite their hardy nature, sliders still require a specific setup to thrive as a pet. Don’t expect affection from these little turtles; they dislike handling. They often learn to recognize their owners and come to greet them in hopes of a tasty treat.

Adult red-eared sliders have a dark brown carapace (the upper shell) and a yellow plastron (lower shell) with variable brown patterning. They have red stripes on each side of the head. Juvenile sliders are bright green, but this color dulls with age.

A red-eared slider shell is a bone that is covered in scale-like plates called scutes. Unlike the epidermal scales of snakes and lizards, scutes are formed deep in the vascular tissue[1]. A turtle’s scutes are made of keratin, much like horns, nails, or beaks in other species.

While fundamentally different to scales, a turtle’s shell shed regularly to enable growth and repair damage. New scutes develop under the surface and  the old scutes fall away.

Shedding usually happens once yearly but can be more often for rapidly growing juveniles.

Red-eared sliders don’t have any teeth but instead have a beak formed out of keratin that they use to tear food.[2]

Related: How Big Do Red-Eared Sliders Get?

Red-eared sliders live in warm, still waters of marshes, lakes, ponds, and swamps. Their native range is throughout the southern-central United States, and this species is tolerant to a range of environments and has established invasive populations in many states and countries.

Red-eared sliders live in areas with warm and still water sources in the wild.

They reside in areas such as:

Sliders prefer calm water where they can move around effortlessly and climb onto rocks or logs for basking in the sun. This species relies on a bustling ecosystem of aquatic plants, small animals, and invertebrates to feed on.

They are considered indicator species as they only inhabit areas with good water quality and a healthy ecosystem.[3] The loss of sliders in a habitat can indicate a threatened ecosystem.

Related: How Long Can Red-Eared Sliders Be Out of Water?

Red-eared sliders have a wide natural range across the southern and central United States. They are native in Colorado, across to Virginia, and down to Florida.

The species is one of the most popular pet species. Widespread ownership has led to invasive populations in many non-native habitats. These populations emerged when sliders escaped from captivity or owners released them.[4]

Red-eared sliders are invasive in:

Invasive populations threaten native species of turtles in these countries as they dominate over basking sites and food sources. They also reproduce at higher rates.

Many countries such as Australia, Europe, and Japan have made it illegal to import red-eared sliders.

Red-eared sliders are a primarily solitary species. They stay close to water sources unless searching for a nest site or a mate. They spend their time foraging for food and basking in the sun.

Aside from basking for thermoregulation, red-eared sliders spend time foraging and hunting in the water. They are diurnal, so they are active during the day.

They are mostly solitary species but congregate in groups in popular basking spots or hunting grounds. Communication is limited to breeding purposes, where sliders show the most interaction with others.

Red-eared sliders are ectotherms, meaning they do not internally control their body temperature like us “warm-blooded” (endothermic) animals. They rely on external sources of heat—the sun—to power their metabolism, all of their behaviors, and bodily functions.

Turtles spend a significant amount of their time basking under the sun to keep their internal temperature at the optimal range. They also absorb UV rays, which are vital for vitamin D3 synthesis and the absorption of dietary calcium.[5]

Contrary to popular belief, red-eared sliders do not hibernate. Hibernation is a term for extended sleep for endothermic mammals. Ectotherms brumate instead.

In this stage, they do not eat or defecate, their breathing rate drops, and they exhibit little activity. Brumation often happens at the bottom of shallow water, where they can regularly surface for air.

Red-eared sliders are omnivores, eating both plant and animal matter. The nutritional requirements change as they age. Juveniles eat more protein to fuel growth and development, while an adult’s diet is higher in vegetable matter.

What Do Red-Eared Sliders Eat in The Wild?

Since this turtle species has a wide habitat distribution, the exact species of food sources vary greatly, depending on local availability.

The basic diet of sliders applies to all populations and includes:

The captive diet of red-eared sliders aims to provide the same nutritional content as their wild diet. This ensures they can grow and develop as normal and express natural behaviors.

As pets, the diet of an adult red-eared slider should include:

The vegetable portion of your red-eared slider’s diet is the largest (granted they are adults).  Vegetable sources should be dense in nutrients.

Some good examples include the following food items:

Sliders can eat fruits as a treat. It is not an integral part of their diet but can be an enriching item on rare occasions.

The protein portion of the slider’s diet should make up 25%  of the adult’s diet and 75% of the juveniles. Young turtles require higher protein compositions as energy sources for the demands of growth.

Ensure you are providing suitably sized portions. Food items, especially insects, that are too large can be difficult to digest and cause an impacted mass in the digestive system.

A general rule is not to feed anything larger than the space between the turtle’s eyes.

Even the best captive diet won’t be able to provide the varied food sources that a red-eared slider consumes in the wild.

A formulated turtle pellet should be fed as a quarter of their diet to ensure pet turtles get all they require nutritionally.

Complete diets like pellets supplement the full spectrum of nutritional requirements, filling in the gaps that fresh food lacks.

Red-eared sliders need at least a 40-gallon tank, divided into deep water and a land area with a basking spot. UV and heat lamps are placed above the basking spot and outputs monitored.

The turtle tank should provide them with opportunities to express all of their natural behaviors. The creation of a dynamic environment supports their mental and physical well-being.

The tank should be a mini natural habitat with basking spots and hides. Aquatic plants are an excellent addition to natural cover and stimulation.

Red-eared sliders are a hardy species. They can tolerate a range of temperatures. In captive care, owners should aim to provide optimal ranges of UV and temperature to support the physical well-being of their turtle.

Tips for Turtle UV and Temperature

Put the lamps on one end of the tank (above the land, not water.) This creates a gradient of measurements so the turtle can move about the tank and self-regulate UV exposure and body temperature.

Invest in a solar meter to measure the UVI directly. This will help you position the lamp away from the basking spot and monitor the bulb’s output. UV bulbs reduce output over time.

A point-and-shoot thermometer is better than a general air temperature one. This allows you to get accurate readings in specific areas. Tank set-ups can create microclimates that have variations in temperatures in small spaces.

Health issues of pet red-eared sliders are usually the result of improper environments or poor diets.

MBD is one of the most common diseases amongst captive reptiles. It’s a weakening of the skeletal system due to calcium deficiency. This can lead to deformed shells, fractures, and weakness in turtles.

Calcium deficiency is not usually due to lack of calcium in the diet but lack of ability to absorb calcium. Improper UV levels will inhibit vitamin D3 synthesis, which is responsible for absorbing calcium.[6]

Red-eared sliders can be deficient in any vitamins due to an inadequate diet. Vitamin A is the most common deficiency. It can cause cell damage around vital organs and be fatal without treatment.[7]

Turtles often carry salmonella without having any symptoms themselves. This poses a risk to humans who keep sliders as pets, especially to immunocompromised people such as the elderly or young people.

Other possible illnesses or injuries for red-eared sliders include:

To promote good health for a red-eared slider. A good filtration system and a cleaning routine are utilized. Old food and fecal should be removed daily by scooping.

Partial water changes help to maintain the bacterial flora of the tank. Change out 25% of the water each week. Once monthly, empty the tank to sanitize all furnishings and replace it with fresh water.

Male red-eared sliders are smaller than females. They also have distinctly larger tails, front claws, and a concave plastron. Sexing can be difficult for immature sliders.

Knowing the sex of a pet turtle is not vital. But knowing the sex can help you control unwanted breeding or prepare for potential offspring.

Here’s how to determine the sex of a red-eared slider:[8]