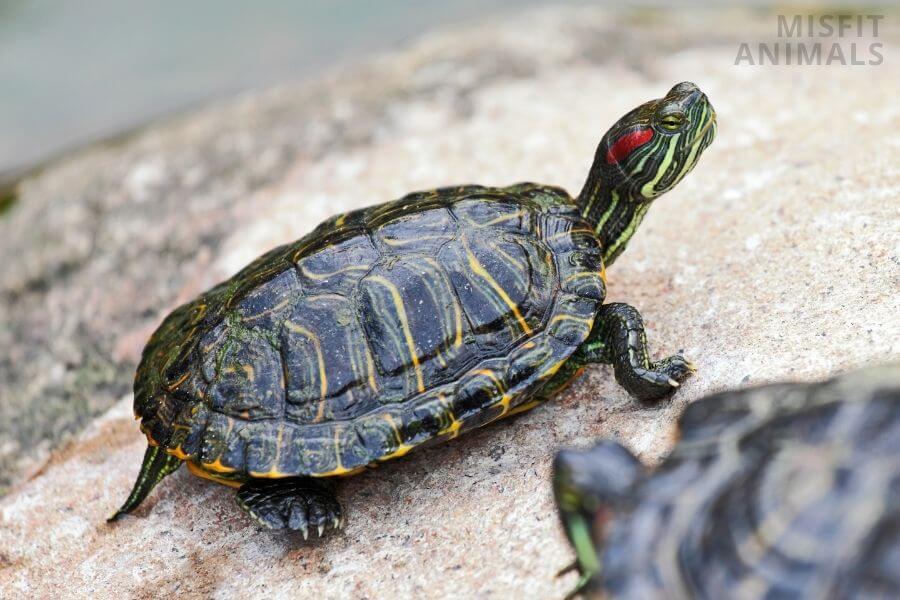 If you’re looking for an amazing pet that is both low-maintenance and downright adorable, look no further than the red-eared slider.

These little turtles are easy to care for and make great companions, but there’s more to them than meets the eye.

1. The Most Popular Pet Turtle

While there are many different species of turtles to choose from, the red-eared slider is by far the most popular pet turtle. These turtles are hardy, meaning they can withstand a wide range of temperatures and do not require special care.

They are also relatively interactive, making them a good choice for those who want a pet turtle that is more than just a decoration.

Despite their “friendly” nature, it is important to remember that turtles are still wild animals and can bite if they feel threatened. With proper care and handling, a red-eared slider can make a great pet for both children and adults alike.

This is not the case for red-eared slider turtles. For these turtles, the incubation temperature during egg development determines gender.[1]

This temperature-dependent hatching can cause concern where local average temperatures are changing. This change can cause a sex skew within red-eared slider populations and impact their future growth in an area.

Instead, they communicate via vibrations.[2]

The ability to pick up on these vibrations allows them to sense when predators are nearby and find mates. Although they don’t have the best vision and hearing, red-eared sliders make up for it with their keen sense of touch.

Their long claws help them dig and search for food, and their sensitive skin allows them to feel the vibrations in the water around them.

As pets, they must be placed in a quiet area of the home as ongoing vibration can cause stress.

Despite their cute and cuddly appearance, pet turtles can be a source of serious illness in humans. These creatures can carry a bacteria known as Salmonella, which can cause a potentially fatal infection in young children or those with weakened immune systems.[3]

To protect the public, the United States government has placed a ban on the distribution of turtles that are smaller than four inches in shell length.[4] While this regulation has helped reduce the number of cases of Salmonella infections, pet owners need to be aware of the risks associated with these animals.

Avoid contact with a turtle’s feces and wash hands thoroughly after handling one of these pets. By taking some simple precautions, we can prevent the spread of this potentially deadly bacteria.

5. Introduced Pests In Some Countries

The red-eared slider is a common pet turtle native to the southern United States. In recent years, they have become popular pets all over the world

When they are illegally released or escape from their owners, they can establish populations outside their native range. These populations threaten local ecosystems, particularly other turtle and reptile species.[5]

Red-eared sliders outcompete native turtles for food and habitat, causing the populations of native turtles to decline. They can also spread disease to other turtles and reptiles.

It is important to be aware of the risks of keeping red-eared sliders as pets. When they are properly cared for, they can make great pets.

6. They Are Found (Almost) Worldwide

Red-eared sliders are native to North America. However, they can now be found in the wild on every continent except Antarctica.

This is because they have been introduced to other continents by humans.

They also need access to water to lay their eggs. Antarctica does not have any permanent bodies of water, so it is not suitable for red-eared sliders.

Related: How Long Can A Red-Eared Slider Be Out Of Water?

7. Babies Fend For Themselves

When it comes to raising their young, red-eared sliders are not the most nurturing of parents. The mother turtle lays her eggs in a nest on land, then abandons them to fend for themselves.

The baby turtles are precocial, meaning they are born with the ability to take care of themselves.[6] They hatch fully developed and can find food and shelter on their own. While this hands-off parenting style may seem harsh, it does have its advantages.

By leaving their offspring to fend for themselves, red-eared slider mothers ensure that only the strongest and most capable babies will survive. This Darwinian approach to reproduction ensures that only the healthiest turtles carry on.

It also saves the parents a lot of energy caring for the young.

8. Only 1% Survive to Adulthood

Only 1% of red-eared slider hatchlings survive to adulthood. This is because they are very vulnerable to predation.[7]

They cannot swim until they have absorbed their egg sacs and the slit has healed (about 21 days after hatching). They are also tiny and soft-shelled as hatchlings, making them easy targets for predators.

Predators eat most hatchlings before they can reach adulthood. Once they have absorbed their egg sacs and the slit has healed, they can better defend themselves from predators. They also grow much larger at this point, making them less attractive prey to predators.

Red-eared sliders are long-lived turtles with a lifespan of 20 to 30 years in the wild. They can live even longer in captivity, with some individuals living more than 50 years.

The secret to their longevity is their slow growth rate and low metabolism. These factors allow them to better withstand the effects of aging.[8]

This slow growth rate reduces the impact of aging, as the cells and tissues have less time to accumulate damage. The low metabolic rate means they use less energy and produce less waste. This also slows down the aging process, as there is less cellular damage from oxidative stress.

Red-eared sliders are toothless turtles. When they hatch from their eggs, they have a temporary egg tooth which they use to break free from their shell.

Even without teeth, these turtles can still eat thanks to their strong jaws and serrated edges.

To eat, red-eared sliders latch onto their food with their jaws and then use their front feet to pull the food apart. This allows them to enjoy various foods, including plants, insects, and small fish.

There you have it, 10 amazing facts about red-eared slider turtles. These creatures are truly captivating and make great pets for people of all ages. If you’re thinking about getting a turtle, do your research and choose a species that is right for you.

If you decide on getting a red-eared slider of your own, be sure to do your research and choose a reputable breeder. If you’re ever lucky enough to encounter one in the wild, give them the space they need.