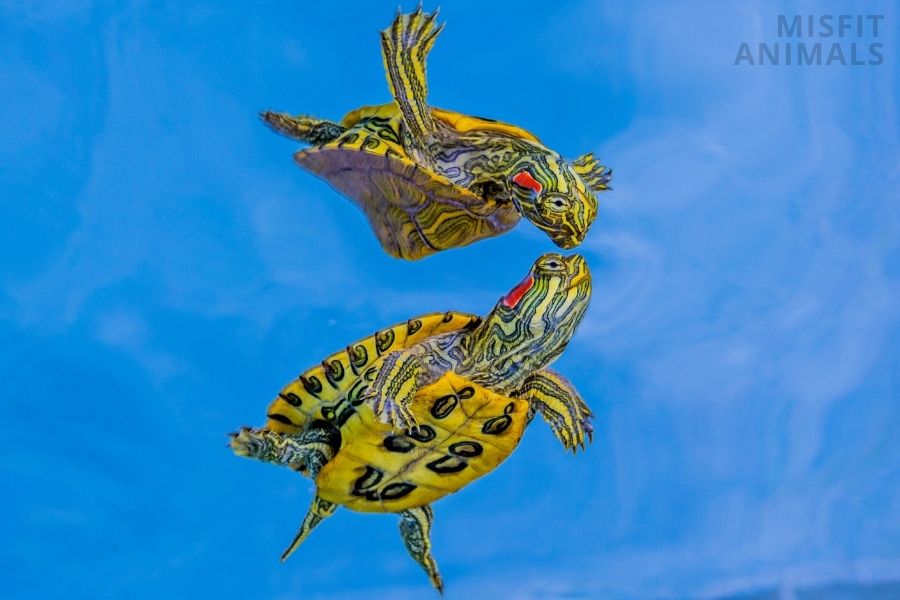 The main differences between male and female red-eared sliders are the size, length of their front claws, concave plastron, and tail thickness. Males are also more aggressive than females.

There are a few key physical and behavioral differences that owners can use to determine the sex of a slider.

Knowing the gender of your pet turtle enables you to provide it with the specific care it needs. A turtle’s sex influences its care requirements regarding reproductive behaviors.

Learn how to tell the difference between male and female red-eared sliders.

Male red-eared sliders are smaller than females, but they are distinct due to their long front claws, concave plastron, and thick tails. Males are also more likely to develop deep black coloration of the shell.

Red-eared sliders have basic social interactions. These are limited to courtship and reproduction. Outside of the breeding season, sliders are a solitary species.

How To Tell The Gender of a Red-Eared Slider?

Figuring out the gender of a red-eared slider is a multi-prong approach. Sex determination can be difficult for hatchlings and juveniles as some sex-dependent traits only appear with sexual maturity.

The gender of a red-eared slider is deduced by:

Some of the gender differences are subtle. Inexperienced owners may not be able to sex their turtle accurately. Reputable and experienced breeders often sex their juveniles before a sale.

Turtles have temperature-dependent sex determination[1]. They do not possess any X or Y chromosomes that differentiate genders. Instead, incubation temperature determines gender.

If you hatch turtles yourself, you can determine the gender by monitoring incubation temperatures in the enclosure.

The physical differences between genders of red-eared sliders are primarily related to reproductive roles.

Their physical differences include:

Female red-eared sliders are larger on average than males. Females reach lengths of 10–13 inches and weigh up to 7 pounds. In contrast, males are 5–8inches long, weighing an average of 4 pounds.

The shape of a turtle’s plastron (bottom half of the shell) is indicative of gender. Females have a flat plastron, and males have a convex (curved inwards) shape. The curvature of the male’s plastron allows for comfortable mounting during copulation.[2]

The long front claws of males also aid in copulation by helping grip during mounting.

A male red-eared slider has front claws double the size of the females, measuring at 0.6 inches, to females 0.3 inches.

Measuring isn’t required as the males’ long front claws are distinct from their shorter back ones. Females have the same sized claws on the front and the back feet.

Male red-eared sliders have thicker and longer tails than the females’ short and thin ones. This larger tail houses their genitalia, which protrudes during mating.

A female’s tail only sticks out from under the shell marginally when viewed above, while the male tail is more pronounced.

The cloaca positioning varies between male and female red-eared sliders. A female’s cloaca is at the base of the tail and is easily reached during mating.

A males cloaca is further down the tail, located anywhere from the middle to the end. This allows the genitals to be closer to the female’s cloaca for successful mating.

Red-eared sliders are light green as hatchlings. During development, their color darkens to deep greens and browns. It is not uncommon for shells to darken so much that the black covers their yellow markings.

While both genders can turn black with age, it’s more common in male sliders. It’s theorized that this darker color influences sexual selection.[3]

Male red-eared sliders are more aggressive towards other turtles. They are territorial of space and food. Females are more relaxed with other turtles and often engage in nesting behaviors such as digging.

The basics of red-eared slider behavior are similar for either gender. The minor differences that separate them are related to courtship and reproduction.

During courtship, male sliders must impress the female for mating permission. They need plenty of energy and minimal competition for courting behaviors.

For these reasons, male sliders are more aggressive towards other turtles and more territorial of space and food resources.

Female red-eared sliders are more tolerant of other turtles. They are still solitary but are more peaceful than males if kept in group settings.

They also display nesting behaviors before laying eggs, including searching for nest sites and digging.

Male red-eared sliders should be kept in solitude to reduce aggression. Female sliders need a nesting area, some substrate to dig in, and dietary adjustments for reproduction.

Care of red-eared sliders is primarily the same for both genders. This species is solitary and best housed alone. Only females should be held in groups if required. Males in groups exhibit aggression and food guarding.

A female red-eared slider needs a habitat set-up that allows her to engage in natural nesting behaviors. Provide her with increased land area for nesting sites and loose substrate for digging.

These nesting resources are essential as she can lay eggs even without the presence of a male. Supplement gravid females with dietary calcium for adequate shell production.

Don’t assume that any eggs laid are infertile due to missing a mate. Female sliders can hold sperm in their bodies for months, fertilizing the eggs during egg-laying.

A recently relocated slider might produce fertile eggs if she was housed with a male previously.

The sex of a red-eared slider can be determined using physical characteristics and reproductive behavior. Some signs are only present when the turtle is an adult, making sexing juveniles difficult.

Knowing the sex of a pet red-eared slider prepares owners to provide the best care and allow them to engage in sex-specific behaviors.