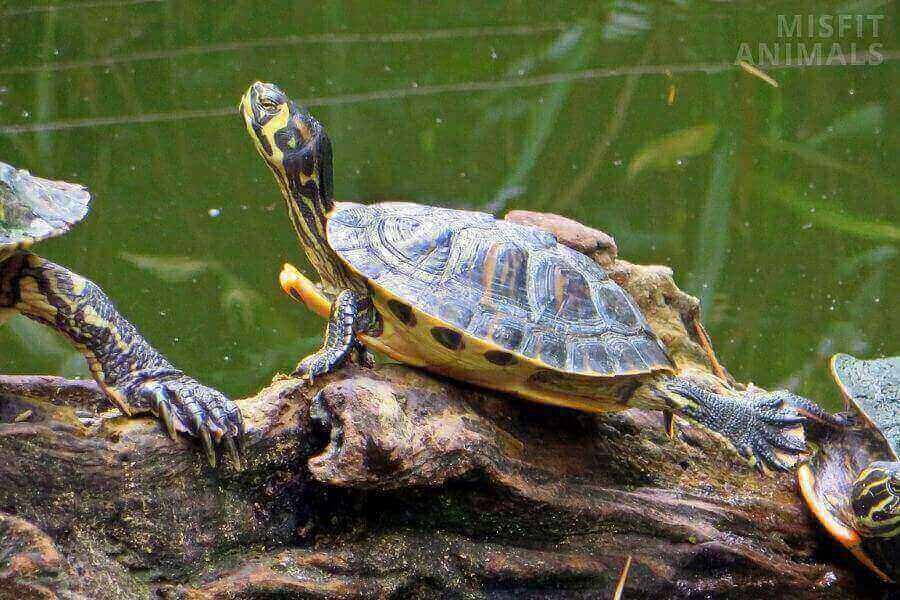 The main difference between yellow-bellied sliders and red-eared sliders is appearance and distribution. The two are subspecies of the pond slider species so are otherwise very similar in their diet, habitat, and behavior.

If you’re looking to add a turtle to your family, you may be wondering what the difference is between the yellow-bellied slider and the red-eared slider.

Both are popular pet turtles, but there are some key differences that you should be aware of before making your decision.

In this article, we’ll compare the two types of turtles side by side, covering everything from their appearance to their personality traits. By the end, you’ll know exactly which type of turtle is right for you and your family.

The primary difference between them is their appearance and distribution.

Both subspecies have a greenish-gray carapace (upper shell), but red-eared sliders typically have a reddish-tan stripe running along the side of their heads (from their eyes to their necks). Yellow-bellied sliders may also have some orange markings on their throats.

The yellow-bellied slider and the red-eared slider are closely related. They are both the same species, the pond slider.

This species has three subspecies which include these two turtles and the Cumberland slider.

Yellow-bellied sliders have a dark green or brown shell with yellow stripes running down their sides. Their belly is usually yellow, which earned them their common name. They also have a distinct yellow splotch on their cheek.

In contrast, red-eared sliders have a bright red stripe behind each ear, and their shells are generally darker in color (usually green or black).

Other than these slight differences, the two subspecies closely resemble each other. They have the same size, shape, and shell design.

The yellow-bellied slider has a smaller natural range than the red-eared slider. They are found from northern Florida up the south-eastern states until Virginia.[1]

The red-eared sliders naturally occur in a cluster of mid-south states, down to northern Mexico. They naturally intersect with yellow-bellied sliders where the two ranges meet in Alabama through to Georgia.

This unnatural distribution has emerged from their popularity as pets and subsequent escapes or releases.[2]

Yellow-bellied sliders and red-eared sliders share many similarities due to being subspecies of the pond slider. They share the same

The yellow-bellied slider and the red-eared slider are both 8 to 12 inches long. They are considered small turtles.

They exhibit sexual dimorphism in their size, with males averaging 6–9 inches and females growing larger at 8–12 inches.

Yellow-bellied sliders and red-eared sliders are both omnivores. They eat both plants and animals.[3]

Their diet consists of a variety of different animals:

The young of each subspecies are primarily carnivorous as protein supports their rapid growth rates. Adults mostly eat vegetation, supplemented with animal proteins.

Slider turtles are semi-aquatic creatures that prefer to live in slow-moving or still water, such as ponds, lakes, ditches, and creeks. They can also inhabit brackish (slightly salty) environments near the ocean.

Slider turtles are incredibly adaptable and can survive in a variety of habitats. They generally prefer habitats with abundant food and shallow water.

They have adapted to suit these environments with smooth, streamlined shells which help them move quickly through the water. They also have webbed feet and a long neck and tail to swim and dive well.

Sliders are most active during daylight hours. They bask on tree stumps and logs, but they also spend a lot of time in the water. Sliders can be aggressive towards each other, so it is important to provide plenty of space for them in an aquarium.

Red-eared sliders are known to be especially aggressive towards other aquarium species. It is important to consider this when choosing a slider as a pet.

Related: 12 Types of Pet Turtles: Which Species is Best for You?

Can Yellow-Bellied Sliders and Red-Eared Sliders Live Together?

Red-eared sliders and yellow-bellied sliders can live together as long as they have a tank with a minimum of 150 gallons. House individuals of the same sex and similar age to prevent aggression.

Turtles of the slider species are solitary, only interacting for reproductive purposes, whether courtship between a male and female or aggression between two males.

They can exist happily when housed alone but can live together in the correct habitat.

Consider the following when keeping two sliders together:

Due to their solitary nature, two turtles forced in the proximity of each other can undergo undue stress. If housed together, the environment should enable them to get away from each other.

A large tank densely planted with abundant hides and basking areas is vital.

Each turtle needs a separate area for their behaviors, so tank equipment is doubled. Two basking lamps ensure that each turtle gets UV exposure without one individual dominating the other.

Feed them separately, away from the primary tank, as one turtle becomes more dominant, keeping the other from food sources.

While they can live together, it requires a lot of extra care and observation to ensure both turtles can behave normally without being socially suppressed or kept from essential resources.

Yellow-bellied sliders and red-eared sliders are the same species so they are genetically compatible to breed. They overlap geographically, so natural hybridization occurs in the wild.

In zoology, the area where two distinct subspecies overlap geographically is called an intergrade.

For red-eared sliders and yellow-bellied sliders, this intergrade is in Alabama, Georgia, and the most western point of Florida. The two subspecies cross over and naturally breed to create hybrids in these areas.

If the two subspecies are kept together in captivity (one of each gender), they may mate and potentially produce offspring. These natural behaviors occur effortlessly in the correct habitat.

The only surefire way to prevent breeding is to keep males and females apart.

While it can occur naturally in the wild, it’s generally frowned upon to breed these two subspecies together, and in many areas, breeding is restricted by law.

Yellow-bellied sliders and red-eared sliders are closely related subspecies of the pond slider. The third subspecies, the Cumberland slider, is much less common.

Both these subspecies are popular within the pet trade, but the pond slider is the most prevalent, and their pet status has affected ecosystems across the globe.

When keeping turtles as pets, owners must manage their breeding to not crossbreed between species or subspecies.