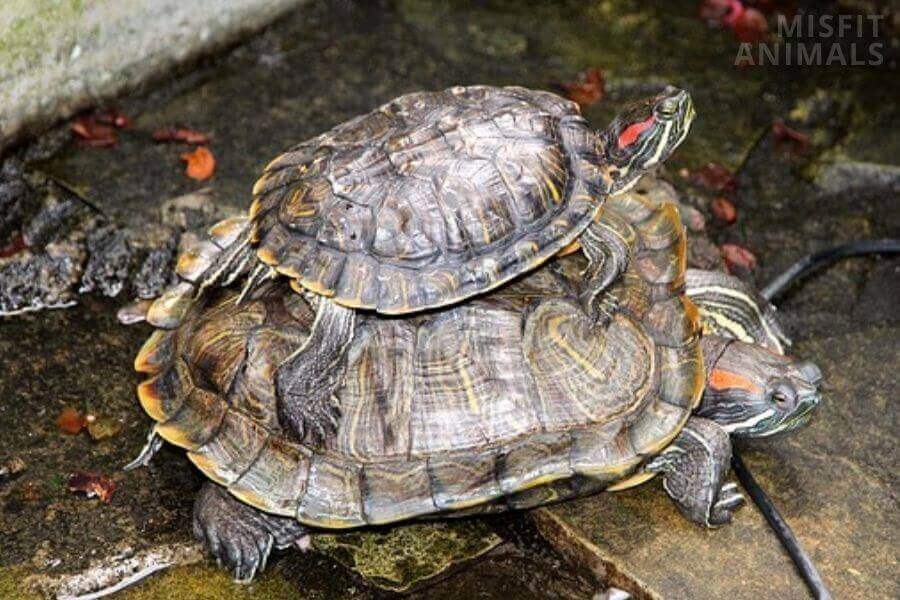 Red-eared sliders live between 20–40 years. In captivity, their lifespan averages around 20 years. Their lifespans are longer in the wild, often reaching ages of 40 and above.

Getting a pet is a big commitment. Animals in your home should need the very best care you can give them.

Knowing how long a pet will live before bringing them home is crucial. They deserve positive welfare throughout all of their life.

Red-eared sliders are one of the most popular choices for pet turtles. Their hardy nature, high activity, and small size make them suited to beginner turtle owners.

What many owners fail to realize is how long sliders can live.

How Long Do Red-Eared Sliders Live In the Wild?

Red-eared sliders are known to live for 40 years in the wild. This lifespan varies based on each turtle’s circumstances.

There are a handful of factors that affect the lifespan of a red-eared slider in the wild:

Wild red-eared sliders are not safe from predation like pet turtles are.[1] Their presence in ponds and other waterways overlaps with many other species.

Their hard shells and retractable limbs help protect them, but they do still fall prey to various medium-sized animals.

Baby red-eared sliders are at higher risk of predation due to their small size and soft shells. Estimations are that only 1% of hatchlings make it to sexual maturity.[2]

Red-eared sliders have a wide distribution across their natural ranges of Northern America and introduced habitats across the globe. They have adapted to various ecosystems; each offers unique competition from other species.

Like other turtle species, sliders are sensitive to habitat change. Water quality, in particular, strongly influences a turtle’s lifespan as polluted waterways increase disease in populations.

Red-eared sliders are at risk of habitat loss from anthropomorphic change in their ecosystems, such as housing or agricultural developments.

Humans are the biggest threat to wild turtles. Red-eared sliders are popular pets, and they are sometimes sourced for the pet trade from wild poaching. This stressful transition and poor care in captivity lead to poor health and a lower average lifespan.[3]

Human action is taken against the red-eared sliders in places where they are invasive. Some countries have implemented policies to remove them from their unnatural habitats due to their effect on native species.

How Long Do Red-Eared Sliders Live In Captivity?

The lifespan of turtles in captivity is often shorter as pets than in the wild. The opposite of this is true for many other captive species, as captive care can prevent many wild-based threats.

Red-eared sliders in animal care facilities exceed the wild lifespan due to the high level of care. In contrast, pet sliders in the home have lower life spans from increased instances of poor care.

Lifespan varie between individuals, influenced by:

Nutrition of an animal directly impacts their lifespan.[4] Pet turtles need a balanced diet that resembles their natural one as closely as possible.

Animals in captive settings have less physical demands than in the wild. In captivity, they have everything they need to thrive, which can cause a lack of motivation for healthy activity.

The confines of a turtle tank can not measure up to the dynamic natural habitat of a red-eared slider. Proper habitat setup and maintenance are vital in ensuring a turtle’s health.

The habitat should provide

These habitat additions allow for natural biological functions of an ectotherm and encourage engagement in natural behaviors. A turtle tank also needs regular cleaning and any waste removed as soon as possible.

Some diseases of red-eared sliders are more common in captivity. Metabolic bone disease is one of these and develops from inadequate UV exposure or a poor diet.

Shell rot and respiratory infections are also common due to poor hygiene within captive environments.[5]

Proper care and regular health checks from a veterinarian help to maintain the health of a pet turtle.

Most Common Cause of Death for Red-Eared Sliders

Despite red-eared sliders having lower life expectancies in captivity than in the wild, being kept as pets has one significant advantage: lack of predation.

In the wild, turtles are be most at risk from predators in and out of the water. Larger mammals, birds, and fish prey on red-eared sliders. Hatchlings are most at risk due to their size and softer shells.

As pets, red-eared sliders do not have any predators unless kept in outdoor enclosures. The shorter lifespan of captive turtles is due to higher rates of various diseases. These arise secondarily from nutritional deficiencies, poor hygiene, or improper habitats.

Red-eared sliders hatch in clutches of 2–30 eggs, incubated in underground nests. Hatchlings don’t inhabit water under three weeks of age, after which they become active juveniles. At five years, they become adults and begin to reproduce.

To hatch, baby sliders use their egg tooth to crack open their shells. The egg tooth falls out an hour later after completing its entire purpose. Hatchlings stay inside the nest for a few days, receiving nourishment from their yolk sacs.

Babies that hatch late in the season can spend the whole winter in the nest, coming out when the temperatures rise in the spring.

Hatchlings spend the first three weeks of their life on land. Before they can swim, the split on their plastron from the yolk sac needs to heal completely.

This time of a red-eared slider’s life makes them incredibly vulnerable. Their terrestrial activity and small size makes them easy targets for predators.

Once the hatchlings enter the water, they can access a broader range of food sources such as aquatic insects and plants. They develop quickly, consuming large amounts of protein for growth.

They grow 3–4 inches in their first year of life, then another inch per year until they reach approximately 12 inches.

Sexually maturity and adulthood are not reached until they are five years old. Some juveniles can perform courtship behaviors, but cannot mate yet.

Adult red-eared sliders spend their time mating or preparing for mating. Courtship occurs in the warm months of March to July. The male will swim around the female, vibrating his claws on her face.

The female approaches the male and sinks to the bottom to mate. If she is not receptive, she becomes aggressive.

After copulation, the female basks often to keep her eggs warm. Her appetite decreases before egg-laying. The fertilization of these happens during laying, not mating.

This tactic means eggs can be laid any time following copulation as the sperm can survive within the female’s body for months. She usually lays them within days to weeks, but she can hold them until the following season.

Red-eared sliders are not the only popular pet turtle. Each species has varying lifespans for owners to commit to. Here are some of the most common pet turtles and their respective lifespans.

Why Do Turtles Live So Long?

Turtles have slow growth and a low metabolic rate that prevents them from aging as many other animals do.

With a metabolism powered by external sources, turtles can slow their bodily functions to survive under environmental pressures such as low temperatures and food scarcity.

This helps them survive in harsh environments and reduces the oxidative stress of cellular respiration, which fuels aging.[6]

Getting a red-eared slider as a pet is a huge commitment. With lifespans of 20–40 years, pet sliders need lots of care at all stages of their lives.

How they are cared for in captivity can influence their life expectancy. Red-eared sliders tend to live shorter captive lives than wild ones due to their specific care requirements that many owners do not fill.