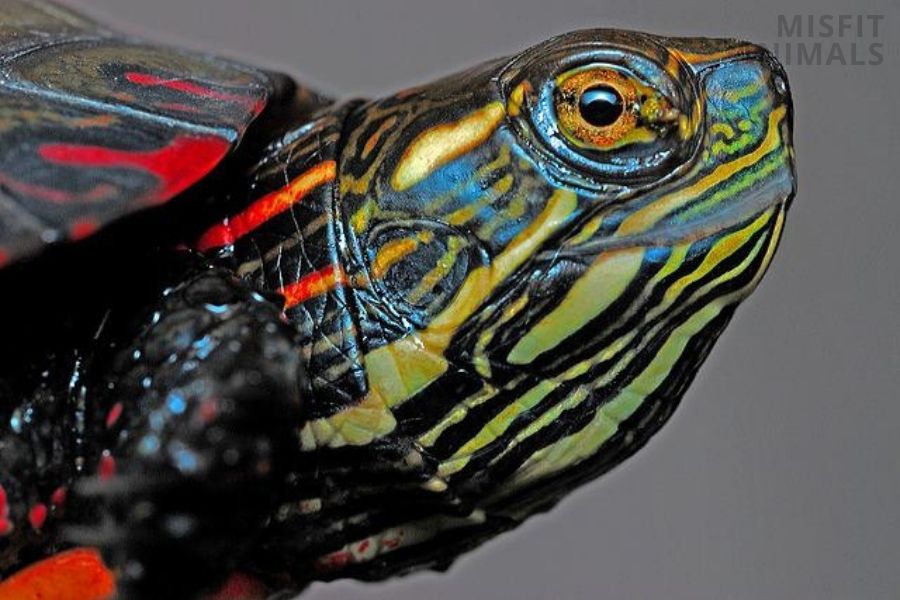 If you love turtles, the southern painted turtle is a must-see. This species is found throughout much of the eastern and central United States.

They are easily identified from their close painted turtle relatives by a distinct dorsal stripe, and generally smaller size. Like other painted turtles, they are common as pets.

There’s a lot to learn about these beautiful little creatures, so we’ve brought together a highlight of their natural histories and general care as pets for you.

Southern painted turtles stand out from their close relatives with their unique evolutionary history and distinct size and coloration.

Here are three facts about them:

The southern painted has always been physically distinct, with a unique appearance and smaller size than the other three subspecies. It wasn’t until scientists studied the mitochondrial DNA that they found how separate the southern species were.[1]

The reclassification has come with some debate. Mostly because the suggestion to classify it as its own species also came with the suggestion to make the dissolve the other three subspecies into a single species.

As of now, the southern painted turtle is recognized as an individual species, but official species groups like the IUCN and the Turtle Taxonomy Working Group recognize both classifications in official publications.

In addition to their small size, this species has a unique feature that other painted turtles do not: a red dorsal stripe.

This stripe runs along their shell from the head to the tail. It’s a defining feature of their appearance, and it’s a key to identifying the species in the wild.

The southern painted turtle is a member of the Emydidae family, containing around 60% of all turtle species. They are part of a larger group called pond turtles, which are turtles that spend most of their time in or near water.

This species was once a subspecies of the painted turtle species (C.picta) with the scientific name, C. picta dorsa.

It was originally thought to have evolved separately from other subspecies from geographic isolation from a historical glaciation. The theory says this glaciation was brief, so a distinct species never formed.[2]

The southern painted turtle has since been reclassified as a separate species (C. dorsalis), in the same genus as the painted turtles (Chrysemys).

The southern painted turtle is a small to medium-sized turtle with a bright red or orange underside. The shell is smooth and dark, with yellow stripes running along the sides.

The head is also brightly colored, with stripes running from the eyes to the jaw.

The southern painted turtle can be easily distinguished from other painted turtle subspecies by its smaller size and the presence of a red or orange dorsal stripe. As babies, they also have a bright yellow plastron (the bottom shell).

Adult southern painted turtles reach a maximum length of 4-6 inches. They are the smallest species in their family, with hatchlings of about one inch long.

Baby turtles are born with both sex chromosomes (XX for female or XY for male), but the egg’s temperature determines the biological sex of the turtle. If the egg is above 86°F, it will be female.[3]

Related: Male vs. Female Painted Turtle: How To Tell The Difference

In the wild, southern painted turtles typically live 20-40 years. In captivity, they can live up to 50 years.

Their lifespan is determined by several factors, including

In the wild, southern painted turtles have many predators:

Their predators often eat the eggs and hatchlings, so only a small number of turtles make it to adulthood.

There are also some human-induced threats to this species in the wild:

The southern painted turtle lives in the southeastern United States, from Virginia to Florida and west to Texas. It is a common turtle in ponds, marshes, and swamps.

The southern painted turtle prefers slow-moving water with a soft, muddy bottom and plenty of aquatic plants. During the winter months, they bury themselves in the mud at the bottom of their habitat to stay warm.

It is the only species of painted turtle found in the southeastern United States.[5]

In the wild, southern painted turtles are omnivorous and eat a variety of foods such as

Their diet changes as they grow. As juveniles, they are largely carnivorous and supplement their diet with plants. As adults, they eat mostly vegetation and smaller amounts of protein.

There are two theories regarding this diet change:

Despite the unknown cause of this diet shift, painted turtle owners mimic this in captivity, feeding hatchlings a high protein diet and adults mostly vegetation with some protein.

In captivity, they eat a diet of pellets, vegetables, shrimp, fish, crickets, and earthworms. It is essential to offer a variety of foods to ensure a balanced diet.

Aquatic plants are also important for their diet as they provide essential vitamins and minerals and a place to hide from predators.

Southern painted turtles are a common pet and can be easily cared for with the following steps:

Southern painted turtles are low-maintenance pets. Once they have the perfect tank set-up, they mostly self-regulate and only need tank cleaning and feeding.

Setting up their environment is tricky and requires a deep knowledge of the species’ natural behaviors and biology.

Southern painted turtles are ectotherms and require external heat sources to power their metabolism. In the wild, they bask in the sun to warm up and retreat into the water to cool down.

In captivity, basking is done under the basking light. Set up a platform that allows your turtle to dry off and warm up to its desired temperature. This area should also provide UVB, which is essential for calcium absorption, via a UV lamp.

Can You Have a Southern Painted Turtle As a Pet?

Yes, southern painted turtles make great pets. They are gentle, easy to care for, and interesting to watch.

Turtles are not traditional pets though. They are not affectionate or overly interactive with humans. As prey species, they are instinctually fearful of humans.

Pet turtles can become accustomed to their owners and begin to associate them with food. Even then, fast movements, strong vibrations, and loud noises can scare them.

Turtles are messy and produce a lot of waste. A bigger tank means more water to dilute the waste and make cleaning easier.

The water temperature for southern painted turtles should be around 75°F. This is the optimum temperature that is warm enough to support activity but cool enough to lower internal temperatures after basking.

A diet for a captive southern painted turtle should consist of:

It is important to offer a variety of food items to ensure that your turtle is getting the nutrients it needs.

Feed your painted turtle every day or every other day. Give them as much food as they can eat in one sitting, and remove any uneaten food after a few hours.

The southern painted turtle is a beautiful and unique reptile that makes an excellent pet. With the proper care, they can live for many years in captivity.

If you are thinking of adding a turtle to your family, do your research to provide them with the best possible home.