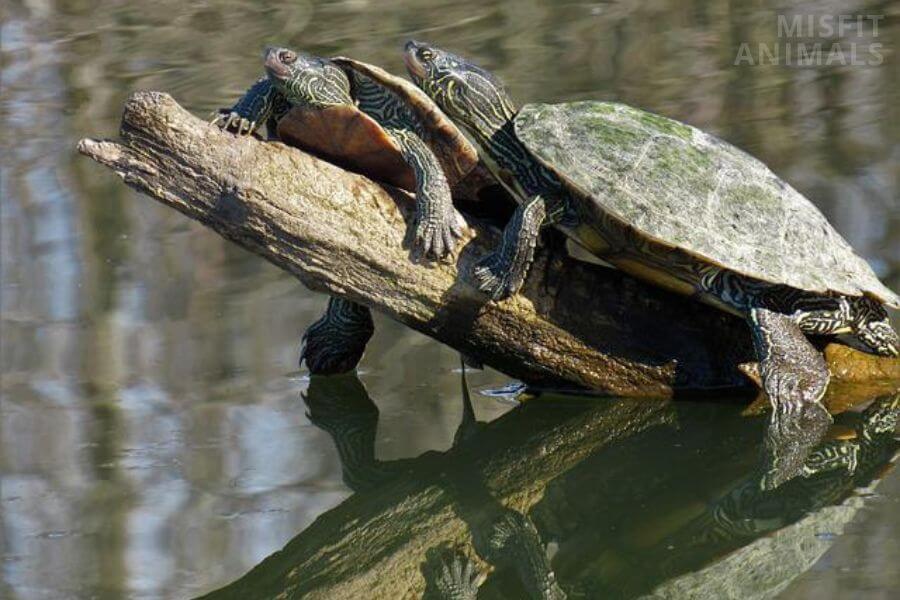 The main differences between male and female painted turtles are the size and shape of their shell. While the male is usually larger than the female, with a longer and narrower shell, the female has a wider, flatter shell that allows her to carry more eggs.

When it comes to painted turtles, size is an indicator of sex. Adult female painted turtles tend to be significantly larger than their female counterparts.

Determining the gender of a young turtle can be trickier.

So why is it important to know your turtle’s gender?

It helps you understand the unique and specialized needs of each sex. Knowing your turtle’s gender also makes breeding management much easier if that is something you are interested in doing.

Whether you’re raising a small pet or trying to breed champion specimens, knowing your turtle’s gender is crucial for ensuring their health and well-being as they grow older.

Male painted turtles are smaller than females. They are also identifiable by their longer tails, low cloaca position, and convex plastron shape.

Understanding your painted turtle’s gender can help you provide optimal care, including giving them the proper diet and housing requirements based on their sex.

For example, males require more access to water for mating purposes, whereas females need a larger and deeper habitat with plenty of space to dig burrows and lay eggs.

Female painted turtles are larger than males. They have shorter tails, high cloaca position, and flat or concave plastron shape.[1]

Females need a large and deep habitat with plenty of space to dig burrows and lay eggs. They also require a diet higher in calcium to help support egg production.

Male painted turtles are smaller than females. They can have longer tails, low cloaca position, and convex plastron shape.[2]

Males may require more access to water for mating purposes. They also benefit from a diet higher in protein to help support sperm production.

The main difference between a male painted turtle and a female is that the male is smaller than the female with a convexly curved plastron. He also has a long tail with a lower cloaca, longer claws, and different reproductive behaviors.

The two genders grow at the same rate, but the female matures later between 6-7 years, compared to 4-5 for males.

These sizes differ across the three subspecies of the painted turtle:

As mentioned before, the female painted turtle is usually much larger than the male. This is because she needs to be able to lay her eggs and dig her burrows, which requires more space and energy.

The shape of the plastron (bottom shell) differs between genders. The male has a convex (curved inwards) plastron, while the female is flat.

This curved shape facilitates the male in mounting the female during copulation.

The two genders have different nutritional requirements during reproduction. Females need higher amounts of calcium to support egg production. Supplement this in captivity with vitamin powders or cuttlebone.

The gender-specific organs of painted turtles put them at risk of unique health risks. For example, females are at risk of becoming egg-bound, while males risk developing kidney stones.

Another difference is their reproductive behavior when they reach sexual maturity and show their secondary sexual characteristics.

Identify mating pairs by their behavior. Males chase and nudge females in an attempt to mate. If she is receptive, she allows him to mount her, and they remain coupled for some time.[3]

Male and female painted turtles are similar overall. They have the same general behavior, habitat, diet, and coloration.

Painted turtles are generally shy and reclusive creatures. They often bask on logs or rocks in groups in the wild. When frightened or disturbed, they quickly retreat into the water.

They are timid around humans but can become used to regular handling and may even eat from your hand.

Painted turtles are aquatic creatures that prefer slow-moving or stagnant water with plenty of vegetation. They need a basking area where they can dry off and warm up.

They often inhabit ponds, lakes, marshes, and swamps in the wild. In captivity, they can be kept in aquaria or backyard ponds.[4]

Outside of the breeding season, the two genders eat much the same diet. Painted turtles are omnivorous and eat a variety of plant and animal matter.

In the wild, their diet consists of

In captivity, they can be fed a diet of

The coloration of painted turtles is the same for males and females. They have a smooth, oval-shaped carapace with red and yellow patterns. Black markings break these up to create an intricate mosaic of colors.

7 Ways to Tell the Gender of a Painted Turtle

Determining the gender of a painted turtle is not always straightforward, especially when they are young.

Seven key observations can help to tell the gender:

Male and female painted turtles grow to different sizes. The male is usually much smaller than the female, with an adult size of seven to eight inches. The female can reach up to ten inches in length.

Measure an adult turtle to determine its gender.

Inspect the plastron (bottom shell) of your painted turtle gently. Do not turn your turtle upside down. Instead, slip your fingers under their body to touch them softly.

The male has a concave (curved inwards) plastron, while the female is flat.

When examining the tail length of a painted turtle, exercise care and caution. The area is sensitive, and mishandling can cause discomfort or aggression.

It’s best to view the tail, not touching it. Males have a long, thick tail which is noticeable compared to the female’s short, thin one.

When observing the tail, look for the cloaca. The male’s cloaca is positioned near the tip of its tail, while the female cloaca is higher on the tail, closer to the shell.

The males have longer claws than the females, which assists them in mounting during copulation. Comparing claw length is easier when you have two painted turtles of different genders.

Aside from the physical differences, behavior can help owners determine their turtle’s gender.

Males may be more territorial and aggressive towards other turtles. They also perform courtship dances to any nearby females, which involve a display of fluttering their claws.

Females are more accepting of other turtles and may dig inside the enclosure to prepare a nest. If your turtle lays eggs, it’s a sure sign it is a female.

Painted turtles have temperature-dependent sex determination. This means young turtles don’t develop their gender based on genetics. Instead, the temperature of incubation determines the sex of the hatchlings.[5]

If you hatch painted turtles yourself, you may be able to get insight into their gender based on your temperature recordings.

There are several ways to determine the gender of a painted turtle. The most accurate is to wait until they are fully grown and measure their size. Methods such as inspecting the shape of their plastron or cloaca positioning can give you a good indication of gender, especially in younger turtles.

Keep an eye on your turtles ‘ behavior and note the differences between males and females. Other clues, such as claw length and incubation temperature, can help you determine their gender.

With careful observation and attention to detail, you can easily identify the gender of your painted turtle.