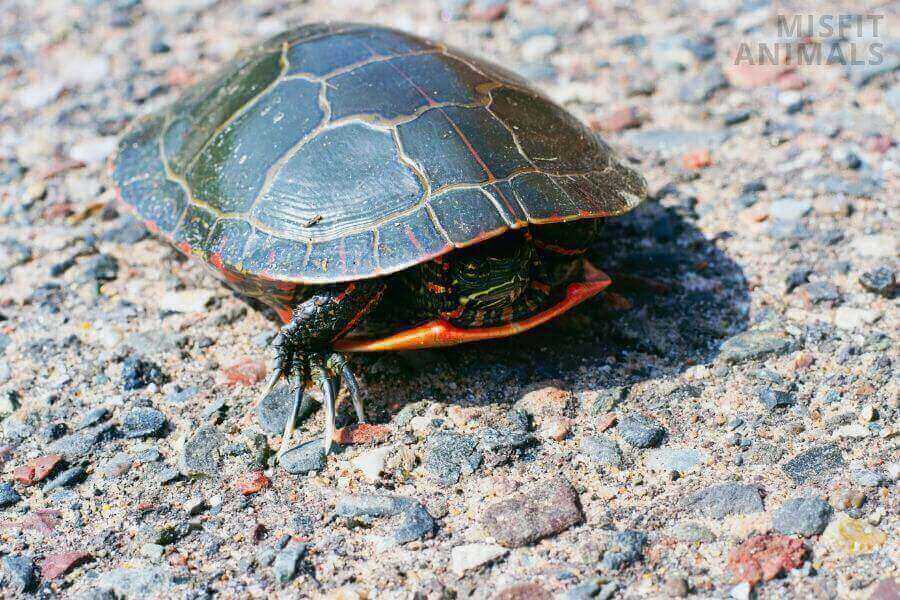 The painted turtle is the most common native turtle in North America and an extremely popular pet. This species has three distinct subspecies (formerly four, including the southern painted turtle).

While these subspecies are all similar, they each have quirks that make them unique. The western painted turtle is the most abundant, the largest, and the most frequent pet of the species.

Let us delve more into what makes them stand out from their subspecies relations.

Western painted turtles are unique from their closest relatives. Their striking colors and local abundance sets them apart from the eastern and midland painted turtles.

The western painted turtle is the largest subspecies of the painted turtle. They grow up to 10 inches on average but may grow as large as 12 inches.[1]

They mature at the same time as the other subspecies (5 to 8 years), so their growth rate is higher to reach full size.

The western painted turtle has the most widespread distribution out of all three subspecies. They are found in Canada from British Columbia to Nova Scotia and in the United States from Montana down to Texas.

They have even found their way to a single river in Northern Mexico.[2]

In some areas outside of their natural range, the western painted turtle has been introduced by humans. They were introduced to Arizona in the 1940s and have since become established there. They’ve also been present in Germany, Indonesia, the Philippines, and Spain.[3]

This introduction stems from escaped or released pets, and conversationalists are worried that the species will impact local species populations, much like the red-eared slider.

In 2008, the western painted turtle was named the official reptile of Colorado. This is thanks to a vote by Colorado citizens[4]. The other contenders were the horned lizard and common collared lizard.

Three other U.S states have the painted turtle as their official reptile

Tommy the Turtle of Manitoba

One of the most popular roadside attractions in Manitoba is Turtle Mountain. It’s a small mountain home to a large population of western painted turtles. The turtles are so popular that there’s even a festival dedicated to them, called the Annual Turtle Mountain Turtlefest.

The Turtle Mountain region also boosts the “Tommy the Turtle” statue in Boissevain, where an annual “turtle derby” was held for 30 years (the last one being in 2001).[5]

The southern painted turtle was once the fourth subspecies of the painted turtle. Scientists then redefined it as separate species (C. dorsalis).

Before 1931, the western and midland subspecies hybridization was a separate subspecies (C. p. treleasei). These turtles naturally occur where the two populations meet.

The western subspecies of the painted turtle are identifiable from its close relations by its larger size. It also displays stunning red and black markings on its plastron (belly) distinct from the plain yellow plastrons of the three other species.

The western painted turtle is the largest of the painted turtle subspecies and can grow up to 10 to 12 inches. They have an olive-colored carapace and red, yellow, and black patterns on the plastron.

The general appearance of the western painted slider is similar to that of the other subspecies. It is distinguished by its colorful plastron, as both the eastern and midland have plain yellow undersides.

The midland subspecies evolved by the hybridization of the western and eastern, so the plastron shows some degree of darkening in the center from the colorful western genetics.

Western painted turtles can also be differentiated from their cousins by their carapace. Although they have the same dark coloration, the western lacks the prominent dorsal stripe that the eastern and midlands possess.

While all four subspecies of painted turtles are native to North America, the western is the only one that extends into Canada (Alberta and Saskatchewan). They also inhabit one river in Northern Mexico.

The western painted turtle is native throughout the western United States:

The western painted turtle is the most widespread of the subspecies and occur in both freshwater and brackish water habitats. They are semi-aquatic and often bask on logs or rocks near the water’s edge.

The western painted turtle is a hardy species and can even inhabit ponds that have dried up during the summer months. They aestivate (dormancy, like brumation, in the summer) in these conditions until the rain returns and fill their habitat back up again.

The western painted turtle has a life cycle similar to the other subspecies. They hatch from eggs in late spring or early summer and spend their first winter hibernating under the ice. As they mature, they grow larger, and their shells harden. They reach sexual maturity at around five to eight years old.

Mating season for the western painted turtle begins in the spring when they emerge from hibernation. The females will travel long distances to find a mate and often mate with multiple males.

After mating, the female will return to her home range to lay her eggs. She digs a nest in the sand or soil near the water’s edge and deposits 3–25 eggs. The eggs incubate for two to three months before hatching.

The hatchlings are about the size of a quarter and are very vulnerable to predators. Their small size and bright coloration make them easy targets for birds, fish, and other turtles.

Related: How To Take Care of a Baby Turtle

The western painted turtle becomes sexually mature at around five to eight years old. The males mature earlier, between 2–5 years, while females take longer and grow larger, maturing between 5–8 years.

Once they reach adulthood, they can live for 20 to 40 years in the wild.

The western painted turtle is a beautiful and fascinating creature. If you ever have the chance to see one in the wild, be sure to take the time to appreciate all of its unique features.

If you consider getting one as a pet turtle, ensure to do some thorough research on their care as it is not as simple as it may seem. They also have an extraordinary lifespan, so they are a huge commitment.