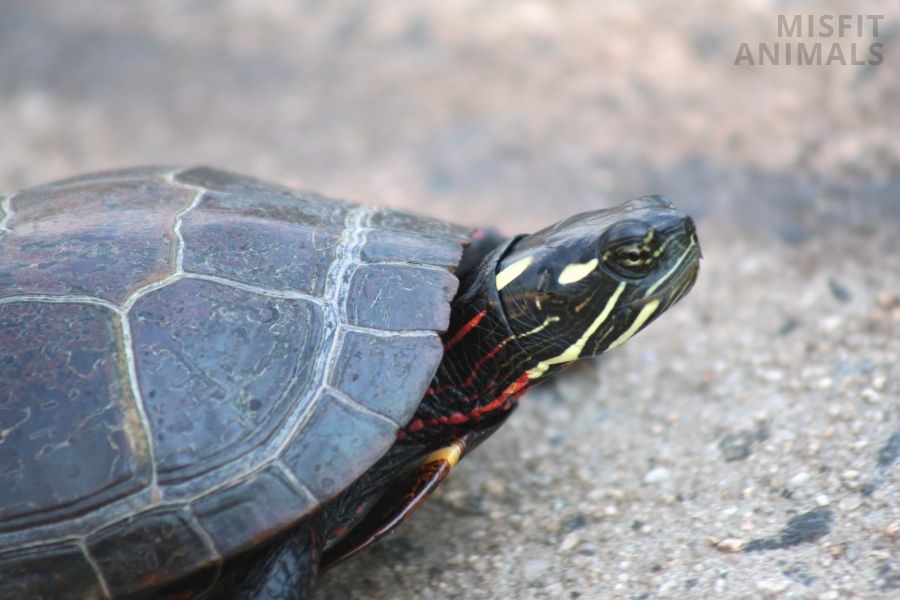 The painted turtle is a favorite among reptile enthusiasts and first-time turtle owners alike.

They are one of the most common turtles in North America and are found in many different habitats.

This article will provide an overview of the painted turtle, including appearance, distribution, care tips, and more.

The painted turtle can be identified by its olive green to the black shell with yellow or orange stripes on the top and sides. They are generally about 4-8 inches in length but can grow up to 12 inches long.

Painted turtles have a beautiful shell that has earned them their namesake. They have an oval-shaped shell that is olive to black on the carapace (upper shell) and yellow or red on the plastron (belly).

They are generally about four to eight inches long, but they can grow up to twelve inches long depending on the subspecies. Males are usually smaller than females.

Like all pond turtles, painted turtles have webbed feet that aid in swimming.[2]

Related: Painted Turtle vs. Red-Eared Slider: Which Is Right for You?

How Much Does a Painted Turtle Weigh?

Painted Turtles are the most abundant turtle species in North America. They are found throughout many North American states, southern Canada, and Northern Mexico. They live in slow-moving waters like ponds and marshes.

The distribution of painted turtles depends on the subspecies.

These different groups emerged based on their distribution across the states and are named according to where they are found:

There are four subspecies of painted turtles:

The Eastern Painted Turtle is found in the eastern United States and southeastern Canada. They are the smallest of the painted turtle subspecies, and their carapace (upper shell) is pale with a yellow plastron (belly). They have a single dorsal stripe on their carapace and average 5–7 inches in length.

The Midland Painted Turtle is found in the central United States. They are larger than the Eastern Painted Turtle, with an average length of about seven to ten inches. Their carapace is dark, with a yellow plastron distinguished by dark shadows. They have a pale dorsal stripe on their carapace.

The Western Painted Turtle is found in the western United States, southwestern Canada, and northwestern Mexico. They are the largest of the painted turtle subspecies, with an average length of 8–12 inches.

Their carapace is dark with a yellow plastron with extensive black markings and red splotches. The dorsal stripe is paled and sometimes not visible at all

The Southern Painted Turtle is in the southeastern United States. They are smaller than the Painted Turtle subspecies at only 4–6 inches. They have similar dark carapaces and yellow plastrons. They are identifiable by their deep orange dorsal stripe.

Painted Turtles are semi-aquatic. They are active in the water while socializing and feeding but spend a large portion of their time basking on land. They brumate during winter to conserve energy.

Painted turtles are diurnal, meaning they are active during the day. They bask in the sun to raise their body temperature and become more active. Basking also helps them dry off their shell, which is essential to preventing bacterial growth.[6]

Brumation is a state of dormancy that reptiles enter during the winter, much like mammals hibernate. Painted turtles will burrow into mud at the bottom of their habitats to escape the cold water and air temperatures.

They will remain buried until the spring when they emerge and resume their activity. Southern populations may not brumate if their habitat does not experience a significant drop in temperature.

Painted turtles are strong swimmers and often travel long distances between bodies of water. They are known to cross roads and highways in search of new habitats.

When crossing land, they first find a high point and orient themselves in the direction they want to go. They then walk until they reach the water.

Traveling is a large energy expenditure, so the painted turtle will only move habitats when moving away from their nest site to look for food or find a mate.

Males will travel long distances in search of females to mate with.

Painted turtles are omnivorous and feed mainly on plants and small animals. They consume various items such as fish, crustaceans, aquatic insects, and carrion. Young turtles are mainly carnivorous but are omnivores as adults

Related: What do painted turtles eat?

What Do Painted Turtles Eat in The Wild?

Painted turtles are omnivorous and eat a variety of aquatic plants and animals.[7]

Their diet consists of:

Painted turtles are opportunistic and eat what is readily available. Since the subspecies have different ranges, the exact diet will vary across subspecies

What Do I Feed My Pet Painted Turtle?

Your painted turtle’s diet should replicate its natural nutrition. A baby-painted turtle should eat a protein-rich diet supplemented by vegetables, while an adult eats a balanced ratio of protein and vegetables.

All painted turtles should be given nutritionally complete turtle pellets as a key diet component.

How Do Painted Turtles Eat?

Painted turtles have long necks to extend out of their shells to catch food. They have no teeth and instead use their sharp beaks to tear their food into small pieces before swallowing it whole.

Their activity is diurnal, and they forage for food during the day. They feed along the bottom of the water, stirring up vegetation to look for small prey.

They eat exclusively in the water as they lack saliva to aid in chewing and swallowing food. The tongue is also fixed, and eating in the water aids in food manipulation.[8]

Painted turtles need a minimum 60-gallon tank with both land and water areas. A basking spot under heat and UV lamps is vital. The tank should be temperature controlled.

As semi-aquatic species, painted turtles should be kept in an enclosure with water and land areas. The water should be deep enough for them to swim and dive, with a basking area that makes it easy for them to get out of the water.

The larger the tank, the better.

To calculate minimum tank size, account for 10 gallons to every inch of your turtle’s shell. For example, a 4-inch baby only needs 40 gallons, while a 10-inch adult needs at least 100 gallons.

Add 50 gallons for any additional individuals to ensure pairs or groups have sufficient room.

Populate the tank with natural enrichment such as aquatic plants, hides, and floating platforms. These items allow a painted turtle to engage in natural behaviors.

Painted turtles are sensitive to water quality and need a filter system to maintain clean water. The filter should be rated for at least twice the size of your tank. Tap water is okay to use as long as you treat it with a water conditioner.

The water should be deep enough to allow your turtle to dive and swim but shallow enough that they can easily get out to bask.

The basking area should have a heat lamp and a UVB light to provide warmth and promote vitamin D absorption. Natural UVB levels reduce the risk of diseases such as metabolic bone disease.

Place the lamps at one end of the tank and the heat lamp at the other to create a  gradient. This allows your turtle to regulate its UV and heat exposure.

Run the lighting in a natural day and night cycle of 12 hours on and 12 hours off.

Painted turtles are cold-blooded animals and need an external heat source. The basking area should be kept at  85°F to 95°F (29°C), while the water should be around 75°F to 80°F.

A drop in temperature at night is okay and occurs by turning off the heat lamps. The basking area should never fall below 70°F (21°C).

Heating the water can be done with an aquarium heater. We recommend using a submersible heater placed at the basking end of the tank. This will help to create a temperature gradient in the water, allowing your pet turtle to regulate their body temperature.

Related: How to Take Care of a Painted Turtle

Male painted turtles mature before the females, at 5 and 8 years, respectively. Males are smaller and court the females. She then lays and leaves her eggs to incubate alone.

Male painted turtles can be distinguished from females by their:

The male’s physical differences aid him in courting and mating. The male will approach the female and begin rubbing her head and neck with his long front claws.

He then climbs on top of the female, his concave plastron balancing on her convex carapace, and grasps her shell with his hind legs to align their cloacas for mating. His long tail and low cloaca allow for copulation.

After successful mating, the female will leave the water to find a dry spot to lay her painted turtle eggs. She will use her back legs to dig a hole and lay her eggs.

She then covers the eggs with dirt, leaves, and debris to incubate them.[9]

The female does not stick around to care for her young. The average clutch size is from three to eight eggs but can be as many as 12.

It takes about 80 days for the painted turtle eggs to hatch. The temperature during incubation determines the gender of the offspring, with warmer temperatures producing more females and cooler temperatures yielding more males.[10]

Painted turtle hatchlings are about an inch long and have a yellow-striped plastron (bottom shell). As they mature, their shell darkens, and the yellow stripes fade.

Painted turtle hatchlings are carnivorous and eat a diet of insects, larvae, and small fish. They grow rapidly during their first year, reaching two inches by one-year-old.

From one year onwards, they grow at approximately one inch per year until maturity.

Males mature quicker than females, halting growth and becoming sexually active between two and five years. Females grow larger and do not become sexually mature until four to eight years.

Painted turtles are popular pet turtles due to their small size and beautiful appearance. They are easy to care for and make great first-time pets.

If you’re thinking of getting a painted turtle, be sure to do your research first. Painted turtles can live for over 20 years in captivity, so be prepared for the long-term commitment.

Your painted turtle can live a long and healthy life with the proper habitat and care.