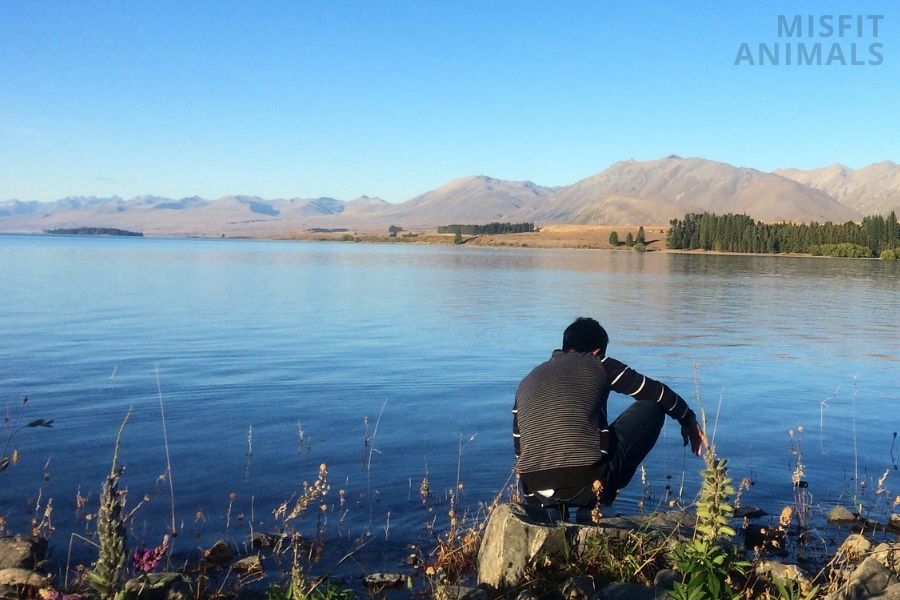 Did you know that there are animals that live in lakes?

There are all sorts of different animals that can be found living in lakes, and some of them can be a bit surprising. If you’re a fan of keeping an eye out for wildlife, then learning about the animals that live in lakes is a must.

In this blog post, we’ll take a look at some of the most common lake animals and tell you a bit about what to expect if you ever come across one.

Description of Animals That Live In Lakes

There are many different animals that live in a lake. Some of these animals include fish, amphibians, reptiles, and mammals. Let’s take a look at a few of the most common ones.

Water snakes are one of the most common lake animals. They are attracted to the water because it is a good place to find food. Water Snakes eat fish, frogs, and other small animals.[1]

They sometimes come out of the water to sun themselves on rocks or logs. Water Snakes are not poisonous, but they can bite if they are scared or angry. Some people are afraid of water snakes, but they are generally gentle creatures.

Herons are one of the lake animals that many people are familiar with. They are long-legged, wading birds with a sharp bill that is perfect for catching fish. Herons can be found all over the world and come in a variety of colors, but they are all united by their love of water.

While herons may look calm and serene as they stand in the lake waiting for their next meal, they are actually quite fierce hunters. When a heron spots a fish, it will quickly move in for the kill, using its sharp bill to stab the hapless creature.

They also eat other small animals that live near the water, such as frogs and snakes.

While it may sound odd, flamingos do live in lakes. They spend most of their time here, as this is where they feed. They are not aquatic animals but still utilize the lake.

These beautiful birds are easily recognizable by their long necks, bright pink feathers, and stilt-like legs. While they may look delicate, flamingos are quite tough and can withstand a variety of climates.

Flamingos are social creatures and often live in large flocks[2]. They are very protective of their young and work together to keep them safe from predators. Flamingos primarily eat small shrimp and algae, which they filter out of the water using their beaks.

While they are not currently endangered, flamingos are threatened by habitat loss and pollution. It is important that we do what we can to protect these beautiful creatures and their homes.

They are vertebrates, meaning they have a backbone[3]. They are cold-blooded, meaning their body temperature changes with the surrounding water temperature.

Fish breathe using gills, which extract oxygen from the water. Most fish are covered in scales, which protect them from predators and parasites.

These animals are an important food source for humans and other animals. They are also popular pets.

River otters are a lake animal that is native to North America. They are most commonly found in rivers, streams, and lakes in the northern United States and Canada.

River otters are members of the weasel family and are closely related to minks and ferrets. They have long, slim bodies with short legs and webbed feet, which help them swim quickly. They also have thick, brown fur that keeps them warm in the water and protects them from predators.

They are very social animals and live in groups called families. Families usually consist of a mother and her offspring, but sometimes other adult river otters will join the group. River otters are very playful creatures and love to swim and play together. They are also very curious and often explore their surroundings.

Painted turtles are one of the most popular lake animals. They are semi-aquatic reptiles and are characterized by their brightly colored shells.

They are found in ponds, lakes, and other slow-moving bodies of water across North America, and get their name from the red, yellow, and orange stripes on their shell.

Painted Turtles are omnivores and eat a variety of different foods, including insects, fish, plants, and even carrion. While their diet is varied, Painted Turtles prefer to eat aquatic invertebrates such as dragonflies, damselflies, and crayfish.

They are also known to bask in the sun on logs or rocks near the water’s edge. Basking helps these turtles regulate their body temperature and is an important part of their daily routine.

Painted Turtles are one of the most common turtles in North America and are popular pets. These turtles can live for many years in captivity, but can also be found in the wild. Painted Turtles are a great addition to any lake, pond, or aquarium.

Alligators are one of the animals that live in a lake. They are typically found in murky waters and often lurk near the shoreline, waiting to ambush their prey.

Alligators are predators and can be dangerous to humans if they feel threatened. It is important to be aware of alligators if you are swimming or wading in a lake and to avoid them if possible. If you must interact with an alligator, always do so with caution and never attempt to feed or touch one.

Frogs are one of the many animals that live in lakes. They are amphibians, which means they can live on land and in water. They have smooth, wet skin and long legs for jumping. Some frogs can jump up to 20 times their own body length.

Their diet is varied but carnivorous – they eat insects, spiders, and other small animals.They use their long, sticky tongues to catch their prey. Some frogs also eat plants.

Frogs are an important part of the lake ecosystem. They help to keep the insect population under control. Frogs also provide food for other animals, such as fish, snakes, and birds.

When they reproduce, they lay their eggs in water. The eggs hatch into tadpoles, which are small, fish-like larvae. Tadpoles grow into frogs over the course of several weeks or months.

Ducks are a type of waterbird with webbed feet, a flat bill, and a waddling gait. They are found in almost every region of the world due to the many different species. Ducks are generally smaller than other waterbirds, such as geese and swans.

They live near water sources, such as lakes, rivers, ponds, and marshes. Some ducks, such as the mallard, can live in urban areas. They eat a variety of things from lakes, including plants, insects, and small fish.

Beavers are rodents. They feed primarily on bark and leaves and build dams to create ponds which they use for protection from predators and as a place to store food.

The beaver is the largest rodent in North America and can weigh up to 60 pounds. Beavers can live up to 24 years in the wild. They are nocturnal and mostly active at night. During the day, they rest in their lodges or in burrows near the water’s edge.

With their tail and webbed feet, beavers are very good swimmers and can stay underwater for up to 15 minutes. They also have thick, brown fur that keeps them warm in the cold water. Their tails are flat and wide which helps them swim. Beavers use their tails as a rudder when they are swimming and to store fat.

Salamanders are a type of amphibian, meaning they can live on land and in water. They are usually found near the bottom of lakes, where it is cooler and they can hide from predators.

These animals vary a great deal in size, but most are about 10 inches long. They have four legs and a long tail and are usually brown or black. Some can be brightly colored.

Some salamanders can breathe through their skin, which is covered in mucus. This allows them to stay underwater for long periods of time. Salamanders eat insects, worms, and other small animals.

The snail is a lake animal. It is a common name applied to most gastropod mollusks that have coiled shells in their adult stage. When many people think of snails, they picture the common garden snail.

This European species have been introduced around the world and is now found on every continent except Antarctica. Snails are important in the global ecosystem and are found in every type of habitat from tropical rain forests to the arctic tundra.

There are many different types of snails that live in lakes, including the common garden snail, the giant African land snail, and the channeled apple snail. They all play an important role in the lake ecosystem by eating algae and other plants. They are also a food source for fish, reptiles, and amphibians.

Snails are often found in lake sediment and on submerged logs. They use their mucus to attach themselves to rocks and other surfaces. When the water level drops, snails can become stranded on dry land.

The axolotl, also known as a Mexican walking fish, is a permanently aquatic salamander that is native to lake Xochimilco in Mexico. The axolotl is currently on the IUCN Red List as critically endangered, due to habitat loss and pollution in its natural environment.

In the wild, axolotls can grow to be up to 30 cm in length, but captive axolotls typically only reach a length of 15 cm.

Axolotls are carnivores and will eat any animal that they can fit into their mouths. In the wild, their diet consists of insects, worms, crustaceans, and small fish. In captivity, they can be fed pellets, live food, or frozen food.

They have the ability to regenerate lost body parts, which is why they are sometimes used in scientific research. When an axolotl loses a limb, it can regenerate the limb within a few months.

What Do You Call Animals That Live in Water?

Aquatic animals are those that live in water. This includes both marine and freshwater animals. Some aquatic animals, such as whales and dolphins, spend their entire lives in the water, while others, such as turtles and seals, spend only part of their time in the water.

What is the difference between a marine animal and a freshwater animal?