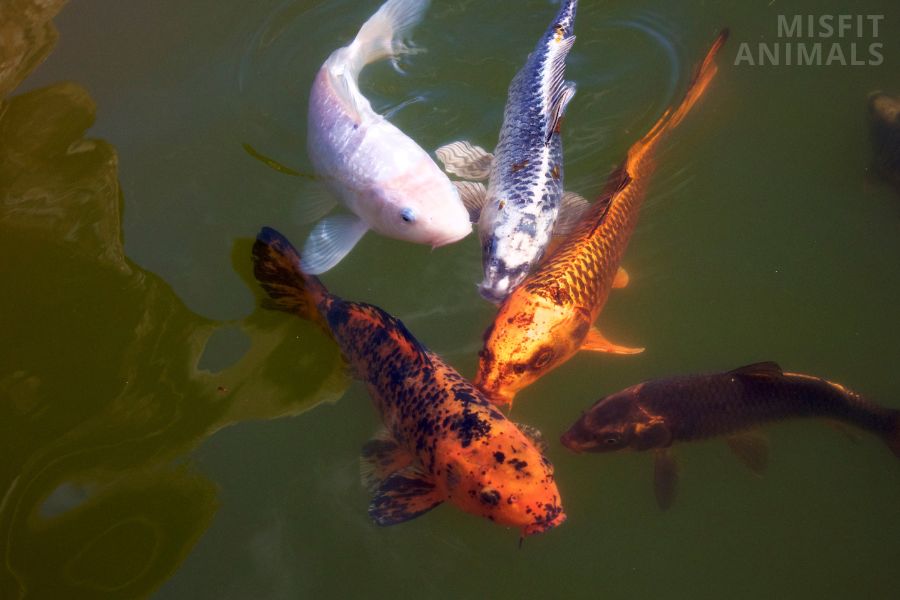 Observing wildlife can be a soothing experience. But it’s not always easy to find wild animals.

One of the easiest ways to stay close to nature (while staying safe) is by observing nature inside a pond.

Ponds are small bodies of still water. The size of ponds varies from a couple of feet to entire lakes. They are usually created by humans but also exist naturally.

Most ponds contain a variety of wildlife, including frogs, beetles, and turtles. This article discusses the various pond animals and their characteristics.

Frogs are a type of amphibian that usually live in still water. Ponds provide the ideal location for frogs to lay eggs. Adult frogs eat insects and flies, while the tadpoles eat algae till they grow up.[1]

Bullfrogs are green or green-brown frogs commonly found in the lakes, ponds, and rivers of North America. They have large eyes that help them see and hunt in the dark.

The bullfrog gets its name from the deep sound males make during the mating season.

Male bullfrogs are aggressive and territorial. They usually wrestle each other for the right to mate with a female.

Females are larger than males and are not aggressive in nature.

The most iconic part about the leopard frog is its patterned skin that resembles a leopard’s spots. They are also brown-green or green in color with different colored spots.

Leopard frogs inhabit the North and South American continents and are predators. Apart from eating insects and flies, they also eat other small frogs.

Turtles are shell-based creatures commonly found in the wild. While most turtles live in oceans and salty water, some live in freshwater.

One of the most common pond turtles is the mud turtle.

The mud turtle gets its name from the harsh living conditions of its habitat. It can live comfortably in brackish marshes and muddy ditches.

Mud turtles are small and are either gray or brown in color. This helps them camouflage into the muddy water.

Snapping turtles are a common type of turtle found in ponds. They are known for their fierce bite, which can exceed 160 newtons of force[3]. They are usually found resting at the bottom of a pond.

Snapping turtles have a stronger bite than some alligators.

There are two types of snapping turtles:

They have long necks and giant bodies, making them deadly underwater where they feed on fish, jellyfish, and amphibians.

American toads are often found on the ground, but they can swim comfortably in the water. They live in woodlands, grassy meadows, and ponds.

Toads live near ponds and lakes as it helps them take cover from predators. This allows them to lay eggs safely.

Catfish are one of the most abundant types of fish found in ponds[4]. Several species of catfish live in ponds across North America. They reproduce fast, which is why they are so widespread.

Catfish live at the bottom of ponds and use scent to find food. They are called catfish because of the whiskers on their mouth that resemble a cat’s.

Fish are present in every part of the world, and fishing is one of the most common activities in ponds.

Here are the most common freshwater fish that live in ponds:

One of the most popular fish species in the world is the Koi fish. They are descendants of carp and are bred for their color and size.

They are also an important part of Chinese and Japanese culture. Koi fish are often kept as pets inside home ponds. They were one of the first types of domesticated fish in the world.

Dragonflies are some of the most common insects found near ponds. It is easy to identify a dragonfly: They have a long, segmented body and two pairs of transparent wings.

Female dragonflies are called damselflies and have unusual mating behaviors.

Male dragonflies will grab the female’s neck with their clasps and fly in tandem with them. They do this until the female accepts them.

Newts are small salamanders that look like frogs and lizards. They live in freshwater and eat insects and tadpoles.

One of the most unique things about newts is that they can regenerate parts of their bodies at will, much like other salamanders.

Birds are warm-blooded creatures that usually live in trees. Most birds can fly, but a few are stuck to the ground.

Heron is the most common bird found near ponds in North America. The most populous species is the blue heron. Herons walk through shallow ponds slowly, waiting for fish to swim close to them.

When a fish approached, the heron will strike fast with its sharp beak to catch it.

Some birds, such as ducks and herons, prefer to live near ponds for their nutritional needs.

Ducks are the most common domesticated birds in the world. But, they are also found in the wild.

There are more than 29 different duck species in the United States alone. They live all over the country but move between North and South depending on the season as they migrate.

While most ducks can fly, domestic ducks can not. They are typically too heavy to carry

As the name suggests, the kingfisher is the king of fishing. They have a long smooth beak that enters the water without making any disturbance.

Kingfishers dive into the ponds to catch fish and small frogs. They also eat insects that live around the ponds.

Cranes are tall white birds with distinctive red heads. They live near waterbodies and walk inside ponds to catch fish.

They are migratory birds and migrate across North America during the breeding season.

Pond snails belong to the gastropod family of invertebrates. They are small and only grow as big as a few centimeters. They have brown shells and live near small puddles.

These snails primarily eat algae, decaying fish, and plants (depending on the snail species).

One of the problems of having a backyard pond is the growth of water beetles. They reproduce fast and can quickly cover the entire pond.

The average lifespan of a water beetle is around three years.

Water beetles grow as large as 1.5 to 2 inches in length. They have long legs that act as oars which help them swim.

Leeches live in stagnant bodies of water. They are parasites and feed on blood from their hosts.

Leech saliva contains a hormone that restricts the blood clotting mechanism of the body, making it easier for them to drink their host’s blood.

Pond skaters have grooves and hair on their legs that trap air molecules. This is what allows them to glide over the water’s surface without falling in.

The deadliest animal in the world, the mosquito, is often found near small bodies of water[5]. Mosquitoes lay their eggs in standing water so the larvae can hatch easily without washing away.

Frogs, fish, and insects rely on mosquitoes to fulfill their nutritional requirements.

While they are important to the ecosystem, they are a menace to humans. They carry dangerous diseases that claim the lives of millions of people around the world.

Most snakes are typically not found near small or temporary ponds, but water snakes are.

They commonly inhabit lands surrounding large bodies of water, as they feed on the smaller animals living there. They can also swim.

Corn snakes and garter snakes are some of the most common types of snakes found near ponds.

Beavers are known around the world for building dams. Not only do they live in freshwater habitats, but they also create their own ponds.

When beavers build dams to stop the water flow of a later, the water gets stuck, creating a small pond.

Beavers are excellent swimmers and can hold their breath for up to 15 minutes.

Your backyard pond is not likely to have an animal as big as the alligator, but they do live near large ponds and lakes. The calm and warm water of the pond is suitable for alligators as it helps them catch their prey easily.

Life in a pond is interesting and flourishing. A small pond can contain fish, turtles, insects, and frogs. Bodies of water also attract hunting birds such as the kingfisher and herons.

Large animals such as beavers, snakes, and alligators also frequent large pond sites but are less likely to live near temporary ones.

Each pond contains a different ecosystem. You can create a pond for your backyard and choose the wildlife you wish to add.

Does a Pond Have Moving Water?

No, ponds do not have moving water. They have stable and stagnant water, which makes breeding easier for several creatures, such as frogs and mosquitoes.

What Animals Live in Ponds?

There are a variety of animals that live in ponds. Frogs, fish, birds, and insects are the major types of pond animals. You can also find alligators and snakes inside ponds sometimes.