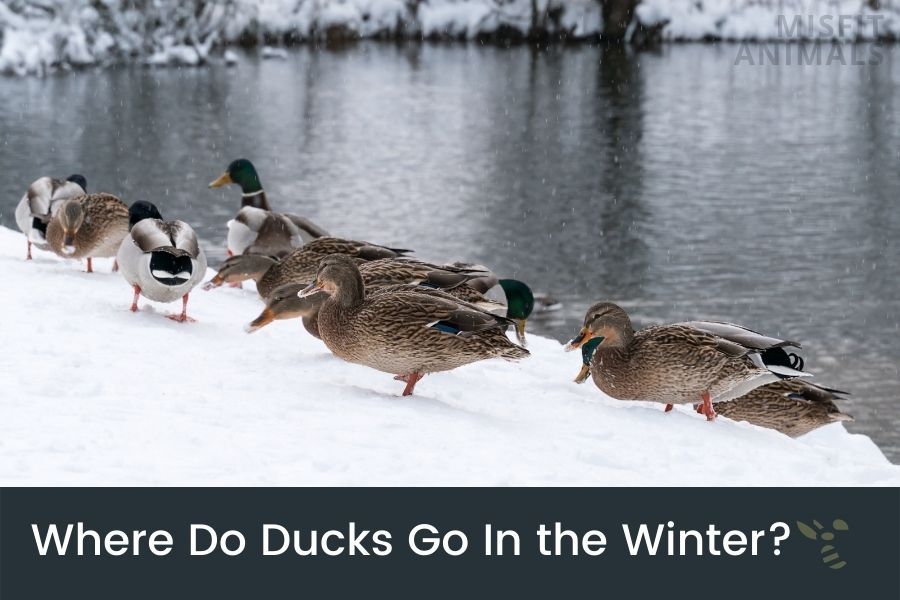 Ducks fly south for the winter. They’ll seek warmer nesting grounds when temperature drop, except if they’re already living in an area that’s warm enough all year round.

Every year, as the weather starts to get colder and the days get shorter, ducks start to move. But where do they go?

Do they migrate south like other birds, or do they stay in their northern habitats throughout the winter?

While ducks are very hardy, as they can withstand very cold temperatures, they aren’t very fond of the cold.

In this article, we’re going to explore where ducks go in the winter and take a look at what scientists have discovered about duck migration.

Where Do Ducks Go In the Winter?

Ducks spend the winter in southern areas. They leave their northern nesting ground for warmer habitats. This includes the southern areas of the US, Europe, and Asia.

When winter comes around, where does one go? Perhaps it’s where the food is more abundant or where there are no predators.

Ducks have a wide variety of habitats they can live in during the cold weather months. Some places are wetlands, coastal marshes, flooded agricultural fields and forests.

Yes, ducks do migrate. During late fall, when temperatures drop low, ducks will start heading south. They do so in flocks, and can travel for many miles at a time.

Migrating is another word for an animal that moves from one region to another, depending on the season.

And yes, ducks do exactly that. They move back and forth from cold and warm climates, according to the season.

From late Spring until early Fall, they’ll spend their time at their summer grounds. These are colder habitats, where the temperature is warmer during the summer.

When the Fall comes around, they’ll fly off to their winter grounds, which are habitats in warmer areas, where it’s also warmer in the winter.

This way, they can avoid extremely hot summers and extremely cold winters.

Related: Can ducks fly & how?

How Do Ducks Migrate?

They do so by flying. Mallard can fly up to 800 miles in a single stretch. While ducks can’t soar in the sky as hawks do, they can still travel far by using wind currents.

When ducks migrate, they use high-speed wind currents high up in the air to push them. This way, they don’t have to use as much energy to fly.

Do All Ducks Migrate?

No, not all ducks migrate. Some can’t, and others live in climates where they don’t have to migrate.

Ducks such as the Pekin duck, which is too large for flying, can’t physically lift themselves up into the air, and hence can’t migrate.

Other ducks simply live in places where it’s not necessary to migrate. The winter and summers are both temperate enough for them to stay put.

Why Do Domestic Ducks Not Migrate?

Most wild ducks migrate in the winter to warmer climates where food is more plentiful and where temperatures are more tolerable[2]. However, most domestic ducks have been bred too large for their bodies to effectively sustain a long flight.

This has also affected their migratory instincts, which have been obsolete in modern domestication. Even in instances where a domestic duck might suddenly develop an urge to migrate, they will usually be too large for the flight.

Migration requires a lot of energy and is very difficult for birds, especially waterfowl. The domestication of ducks, which dates back to the first domestication in China nearly 5000 years ago[3] has caused them to weigh too much.

They don’t have the power, nor the energy, to carry themselves.

This is not the only instinct that has been lost due to domestication. Humans have also bred out other migratory qualities in waterfowl.

For example, the common mallard (which is the ancestor of most domestic ducks) has a well-developed homing instinct. They can return to where they were born.

This homing instinct has been bred out of domesticated waterfowl. This behavior would limit their capacity for being introduced into new regions.

Where Do Ducks Sleep in the Winter?

Ducks will sleep at their summer nesting ground during the winter. They sleep outside, either in water, or on land.

Some ducks migrate south where it is warmer for the winter, while others stay where they are.

By doing so, they can sleep outside without worrying about freezing temperatures. Hence, they can continue loafing around in the water all day long.

Ducks also have multiple layers of feathers, which help protect them against cold temperatures.

Related: Where & how do ducks sleep?

How Do Ducks Survive Winter?

Ducks survive the winter by migrating, storing up on fat, and growing out their winter-layer of feathers.

Ducks have some different methods for surviving cold temperatures:

Ducks have semiplume feathers, which work as a layer of insulation. Semiplume feathers are not very dense so they can still allow air circulation in between them and keep the duck warm[3].

This allows ducks to remain warm when winter approaches.

During winter, some ducks swim underwater to find food. Sometimes, they even have to walk across the ice. But they don’t freeze, due to counter-current heat exchange.

Counter-current refers to two different fluids moving in the same direction but at different speeds. This occurs within a bird’s wings and feet.

Instead of their arteries and veins simply being in one long line, they intertwine. This allows for them to pass on the heat before it reaches ducks’ feet. By reducing the difference in temperatures between the ice and their feet, they reduce heat loss.

Many of us living in cold climates dread winter.  It’s so difficult to get out of bed and trudge through the snow and ice just to get coffee, piling on more clothing every layer we go.

But many animals welcome the colder months because they have large fat reserves that help them survive, one of them is ducks.

Ducks have fat deposits that are quite essential to keep them warm, especially in the winter months. They’ll eat more, building a thicker layer of fat, which helps keep them warm.

It’s the same concept as putting on a large jacket.

Migration is common animal behavior. This helps animals survive, as it allows them to move to new areas with more food, warmth, and mates.

One major form of animal migration is long-distance travel and the movement is usually marked by a specific time period or season. During this time, ducks will change their eating habits, sleep patterns, and even body mass to be able to adapt to the new setting.

Can Ducks Freeze to Death?

Yes, ducks can freeze to death. While their feet can withstand extremely cold temperatures, there’s a limit.

Ducks are a species of waterfowl, which makes them ill-equipped to deal with extremely cold temperatures. Although they have been known to live in colder climates when the weather is mild, there is such as thing as too cold.

Ducks may freeze to death for two reasons:

If ducks sense that it is too cold for them to be outside, they’ll typically start migrating, if they haven’t already. However, if the weather changes too quickly, the water may freeze. Some ducks need water to take off, making it impossible for them to leave, until the water unfreezes.

This essentially traps them in their winter nesting grounds, which can ultimately result in death.

When Do Ducks Migrate Back After Winter?

Ducks will come back to their summer nesting ground between early and late spring.

When the weather starts to warm up in the spring (e.g., March through May) ducks will migrate back north for the summer.

Some ducks come back to the same area, while others find new nesting ground.

Do Ducks Come Back to the Same Area in Spring?

Some ducks return to the exact location they left in the fall, while others choose to build a new nest somewhere completely different. This very much depends on the species, as well as the individual duck.

They’ll typically return to the same location if it was a spot with plenty of food. If not, they’ll find somewhere else to live.

Ducks migrate during the winter to find food and a place where they can stay warm. They fly south in the late fall and will return in the early spring. This happens both in the US, Europe, and Asia.

Ducks have a number of methods to survive cold temperatures though, such as counter-current heat exchange, fat reserves, and insulating feathers.