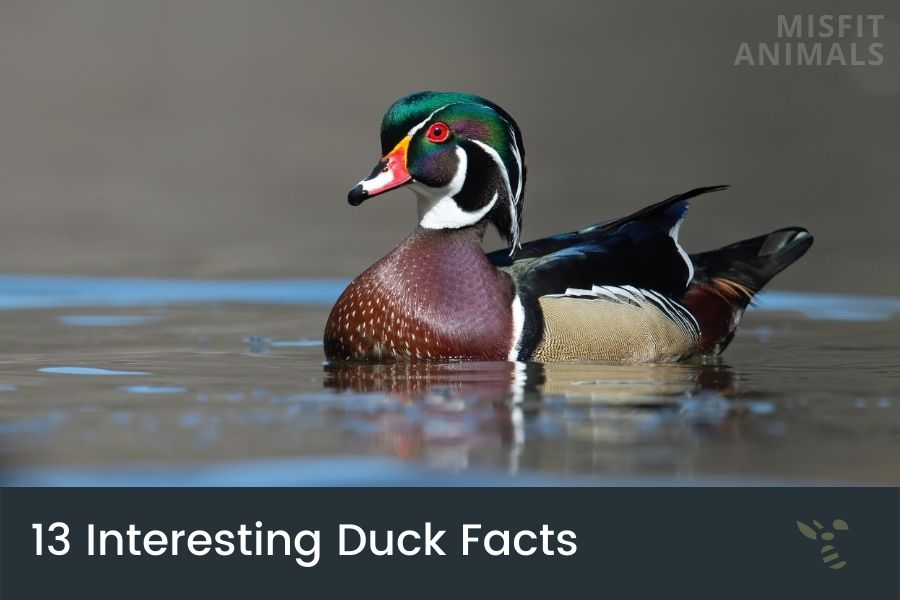 Do you know what a duck is?

Ducks are a type of bird called waterfowl, but there is more to them than that. In fact, ducks are quite interesting creatures.

There is more to ducks than meets the eye.

Here are 13 interesting duck facts that will help you learn more about these amazing creatures:

Ducks have waterproof feathers, which help them stay dry and warm when swimming. It also helps them stay buoyant, as they trap air between their wings and body.

Duck feathers are different from other types of bird feathers because they are waterproof, much like other waterfowl. This is due to a special oil that they secrete. [1]

This helps water roll off of the duck’s feathers instead of soaking them.

As they’re waterproof, they also use their feathers to trap air between their wings and body. This helps them easily stay afloat.

Related: How fast can ducks swim?

Ducks are omnivores, which means they eat both animals and plants.

Ducks eat a variety of plants and animals. The majority of their diet consists of vegetation, often found on the bottom of ponds and lakes.

Interestingly enough, ducks don’t need the protein from animals. Rather, they need the amino acids found in the protein. [2]

Some duck species are almost exclusively herbivorous. About 80% of their diet consists of vegetation.

Typically, ducks prefer to feed on water-borne vegetation such as

Ducklings are able to eat the same foods as adults. Ducks will also eat slugs, worms, and insects if they are available.

Related: Everything you need to know about baby ducks

3. Ducklings Imprint on the First Animal or Person They See

Ducklings imprint on the first being they see. This is typically their mother. Imprinting means they follow and act as whoever they imprint on.

Ducklings follow the first thing they see during hatching [2]. This is called imprinting. Merriam-Webster defines imprinting as:

Essentially, duck imprinting is when ducklings follow the first thing they see in their life when duckling-hood begins. This has been proven to happen with people, usually duck breeders who need to take care of these ducklings until they grow up. [3]

Ducks don’t mate for life. Instead, they form seasonal bonds, where they breed with a new mate each year.

Ducks do not form long-term pair bonds. Instead, ducks have seasonal bonds. They practice “monogamy” during a single breeding season, but they will find a new mate the following year.

Mating begins with a courting ritual. The female duck chooses her mate depending on a few factors:

If the drake is successful, the two ducks will mate.

If a male is rejected, he may force copulation with a dozen other males. They’ll force themselves onto the female, which is a violent event, sometimes resulting in the death of the female.

Related: How do ducks mate?

Ducks are social animals, and they prefer to stay in groups. They do this because they’re safer in groups.

Ducks like to stick together. They do this because of safety. A group of ducks is more likely to detect predators or other threats.

When female ducks detect a threat, they’ll start quacking to alert other nearby ducks.

A group of ducks can have different names, depending on what they’re doing. A group of swimming ducks is called a raft, while a group of flying ducks can be called a fleet.

Ducks also stay in groups so they can increase their chances of finding food or shelter, and ducklings are able to learn survival skills by observing adult duck behavior.

Related: What is a group of ducks called?

The average lifespan of a duck is between 5 to 10 years, but some ducks can live to be 20 years old.

Ducks can live for up to 20 years. This is typically only seen with ducks in captivity, where they’re taken care of.

Ducks in the wild typically only live 5 to 10 years, and they aren’t as well-cared for. They have to find food themselves.

Related: How long do ducks live?

7. Not All Ducks Can Fly

Many people think of ducks as flying animals, yet not all ducks can fly. The Pekin duck is a great example.

Ducks can typically fly. They use this ability to escape predators, as well as migrate.

A mallard duck can fly up to 800 miles in a single stretch when migrating.

However, not all ducks are alike. Pekin ducks, for example, can’t fly. This is due to domestication.

Pekin ducks are descendants of Mallard ducks and have been domesticated by people for food. Through years of evolution, and breeding, they’ve gotten too large and heavy to fly. Their wings simply can’t carry them.

8. Only the Female Ducks Quack

Ducks are well-known for their quacking. However, it’s only the female ducks that quack. Drakes are unable to quack.

Most people can recognize a duck quack when they hear it. What most people don’t know is, that it’s only the female duck that quacks.

Male ducks can’t quack, as their voice box is structured differently. Instead, they make a raspy sound, often categorized as a form of a whistle.

Females quack to communicate, to warn about threats, and to talk to their ducklings. They also quack when they’re lonely.

Related: Why do ducks quack?

Ducks can lay an egg a day, on average. These can be both fertilized and unfertilized eggs.

Most ducks can lay an egg a day. If they’re fertilized, they’ll hatch into ducklings. If not, they won’t hatch. [4]

When female ducks mate with a male, they’ll typically lay between 8 to 15 fertilized eggs. They’ll then incubate the eggs for an average of 28 days.

10. Ducks Have Been Domesticated for 3000 Years

Ducks were first domesticated about 3,000 to 4,000 years ago, and are nowadays kept for their meat and eggs.

Duck farming has been a part of many cultures for centuries. It is believed that the duck was domesticated about 3,000 to 4,000 years ago.

Only two duck species have been domesticated:

Male ducks are called drakes, while a female duck is called a hen. Baby ducks are known as ducklings.

Ducks are waterfowl, which means they live in places where there is a lot of water like ponds, streams, and lakes. They are found on every continent except Antarctica.

There are more than 160 duck species that range in size from the small duck called a “teal” which is only about 10 inches long to a large duck called a Muscovy Duck.

12. The Mallard Duck Is the Most Common Duck

The most common species of duck in the world is the Mallard duck. This species lives all over the world.

The duck is a bird that belongs to the family of duck, goose, and swan. The duck is very common and can be found across the world in both fresh water and seawater regions.

There are many different species of duck such as mallard ducks, wood duck, Australian wood duck, Indian spot bill duck, pin-tailed duck, and many more.

The most common species of duck is the Mallard duck. It’s estimated that there are about 10.8 million Mallards in North America alone. [5]

Mallard ducks can be identified by it’s large and heavy bodies. They have long bodies and bills (beaks). Males have green heads, yellow bills, and purple-brown bodies. Female Mallards are brown with orange bills.

Some ducks species can change their gender from female to male.

In general, there are more male ducks than females. This may partly be due to the fact that they can change gender from female to male.

This happens when a female duck loses one of her ovaries due to infection. The female will start transitioning, beginning with hormonal changes, and later physical changes.

In duck species, males and females look different from each other. In general, male ducks are larger than females. They also have very colorful plumage which is used for mating displays.

Sexual dimorphism is most prominent among the duck family or Anatidae.

Ducks are waterfowl birds. They live around water and are widespread across the globe. These birds are generally smaller than other waterfowl, such as geese and swans.

Ducks are part of the Anatidae family, where we also find swans and geese.

They are aquatic birds. Many duck species live in the wild, but ducks have also been domesticated for their meat.

Male and female ducks look very different, as males use their colorful feathers to attract a mate.

Ducks typically have shorter, and weaker, wings than most other birds, meaning they can’t soar in the air when flying. Instead, they flap their wings all of the time to keep themselves airborne.