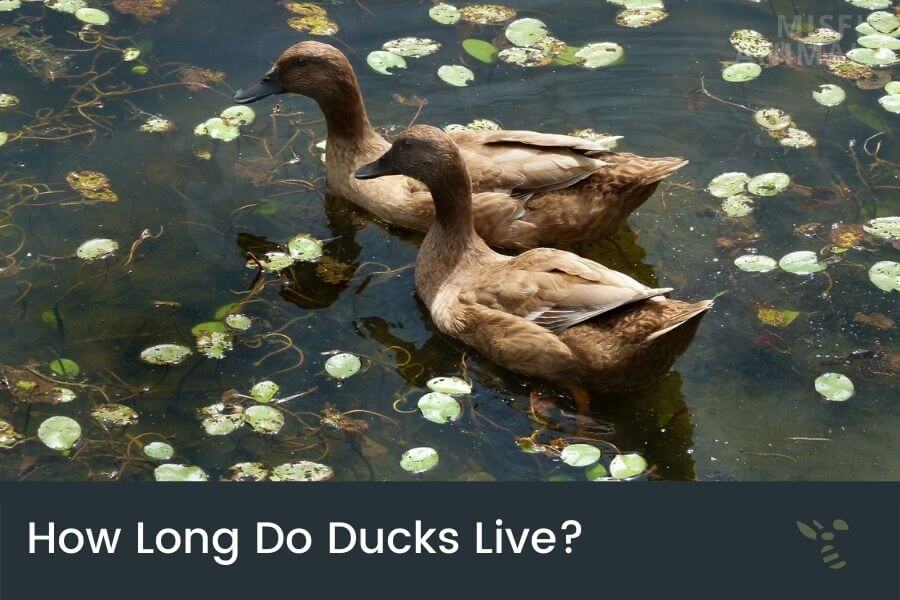 Duck live for 5 to 10 years on average, but some may live up to 20 years with proper care. It very much depends on the species, food availability, and other factors.

Ducks are commonly found in the wild, as well as in captivity on farms or as pets.

But how long do ducks live?

That’s the question we’ll be answering in this article. We’ll also take a closer look at specific species, such as Pekin ducks, Mallards, and Muscovy ducks.

How Long Do Ducks Live?

The average duck lifespan is 5 to 10 years old, though there are some reports of ducks living up to 20 years.

Ducks are generally long-lived, and how long do ducks live is related to how well they are cared for. Many domesticated ducks can be expected to live 10 years or more.

How Long Do Pet Ducks Live?

In captivity, pet ducks generally live 10 to 15 years. However, there are several aspects that can affect their lifespan. Aside from access to food, clean shelter can also be a deciding factor about how long they’re going to live.

Some pet ducks have been observed living for as long as 20 years.

How Long Do Ducks Live In the Wild?

In the wild, ducks have a much shorter lifespan, ranging from 2 to 10 years. This is due to a higher mortality rate amongst ducklings, as well as other factors.

In the wild, ducks aren’t given as much care as ducks in captivity. They’re also not fed, or protected as much, resulting in a shorter lifespan.

The lifespan of Duck Species

Duck species can live anywhere from 2 to 20 years. The average lifespan of a duck is around 5 to 10 years though.

Here are the lifespans of different duck breeds.

How Long Do Pekin Ducks Live?

A Pekin duck, also known as White ducks or domestic ducks, is a domestic breed of white-feathered ducks that originates from the Peking district of China.

These ducks are descendants of the Mallard.

Today, most Pekins are bred for their meat and eggs. The drakes have a light pink bill and the hens have a small black dot on top of their heads.

Pekin ducks live between 5 and 10 years on average.

How Long Do Mallard Ducks Live?

Mallard ducks are the most common ducks in the wild. While they can live up to 10 years, they often live 3 to 5 years in the wild due to predation, hunting, and other factors.

The longest living Mallard was reported to live for 22 years.

Mallards were domesticated in 4,000 BC by the Egyptians, Chinese, and Europeans.[2]

How Long Do Muscovy Ducks Live?

Muscovy ducks live for 8 to 12 years and are some of the longest living ducks in the wild.

Muscovy ducks are native to the Americas and live in South America, Central America, Mexico, Florida, Louisiana, Trinidad, and Tobago.

The Muscovy duck is both domesticated for meat production and raised on small farms by hobbyists across North America. Many Muscovy ducks are wild and free-ranging.

Wild Muscovy ducks can live between 8 to 12 years in the wild.

How Long Do Wood Ducks Live?

Wood ducks have short lifespans with an average of 2 to 4 years on average.

Wood ducks are known for their incredible colors, ranging from blue and green to yellow and red. While they’re very colorful, they don’t live long in the wild, with an average lifespan of 2 to 4 years.

In captivity, though, wood ducks can live longer, up to 15 years. This goes to show how much a duck’s environment can impact its lifespan.

Khaki Campbell ducks typically live for 8 to 10 years but can get as old as 15 years.

The Campbell duck was introduced to the public in 1898, and the Khaki Campbell in 1901.

They’re typically kept for their eggs, and live an average of 8 to 10 years in captivity, but can get as old as 15 years if given proper care.

How Long Do Rouen Ducks Live?

The Rouen duck breed has an average lifespan of 8 to 10 years but can live up to 20 years when given proper care.

Rouen ducks are large and hardy. They can withstand cold temperatures and are hence very easy to care for. They’re typically found in captivity, where they’ll typically live for 8 to 10 years.

If they’re given proper care, Rouen ducks can live up to 20 years.

Indian Runner Ducks can live for up to 12 years[3]. Their average lifespan is 8 to 12 years in captivity.

The life expectancy of ducks depends on many factors, including their diet, living conditions, and genetics.

Indian runner ducks are great foragers and hence tend to have longer lifespans. In the wild, they may live to become 10 years old, while they will easily live 10 to 12 years in captivity.

What Was the Oldest Known Duck?

Later on, this record was beaten by Edwina, a female mallard. This duck lived to be 22 years old and also lived in the UK.[4]

While there are no records of it, there are claims of a duck living for 29 years, which would be the record.

Which Duck Breed Lives the Longest?

When talking about which breed lives the longest, there are two sides of the story: the longest average lifespan, and the record for the oldest duck.

As already covered, the longest living duck was a Mallard that lived for 22 years.

However, in the wild, they typically only live for 3 to 5 years, though they can live as long as 10 years. Here, the Muscovy duck typically lives the longest, with a lifespan of 8 to 12 years.

Factors That Affect the Lifespan of Ducks

Ducks vary in their life expectancy depending on a number of factors. Physical attributes, genetics, and food are three major factors that impact the lifespan of ducks.

Ducks are very sensitive to their environment, and food availability can greatly affect how old they live.

Their diets vary among species, but most will eat a variety of plants, insects, small fish, worms, mollusks, and crustaceans throughout their lives.

If ducks do not have access to enough food their bodies will go into a conservation mode where they live off of fat reserves and lose feathers.

This is especially dangerous to them around winter. If they don’t get enough food before migrating, they may be too weak to take flight. This can result in them being stuck in an environment that’s too cold, whereafter they’ll freeze to death.

As with every living thing, their overall health is a great factor when it comes to lifespan.

Ducks require good health in order to live long, healthy lives. If ducks get sick, or they don’t get proper nutrition, they can suffer from malnutrition and diseases. Some signs of poor health include excessive feather loss, dull eyes, lethargy, and a decrease in appetite.

Humans can greatly affect the overall health of wild ducks through feeding.

Feeding ducks is a popular activity. Unfortunately, most people don’t feed ducks proper food. Or they overfeed them. Both of these can lead to serious health problems.

Predators are considered to be one of the number one causes of premature death among ducks, and other birds.

There are plenty of predators that like the taste of ducks:

Ducks do implement some natural self-defense mechanism to avoid predators, such as staying in groups.

Ducks are generally hardy creatures and can withstand cold temperatures, but they still need proper housing or shelter in extreme weather conditions.

Housing and shelter play a lot into a duck’s lifespan. This is especially true for ducks in captivity.

In the wild, ducks migrate during the winter to avoid extreme conditions. This is their natural way of assuring they live in proper conditions.

Ducks live between 5 to 10 years in general but can live as long as 20 years if given proper care in captivity.

There are several factors that play into this, such as food availability, overall health, predators, and housing.