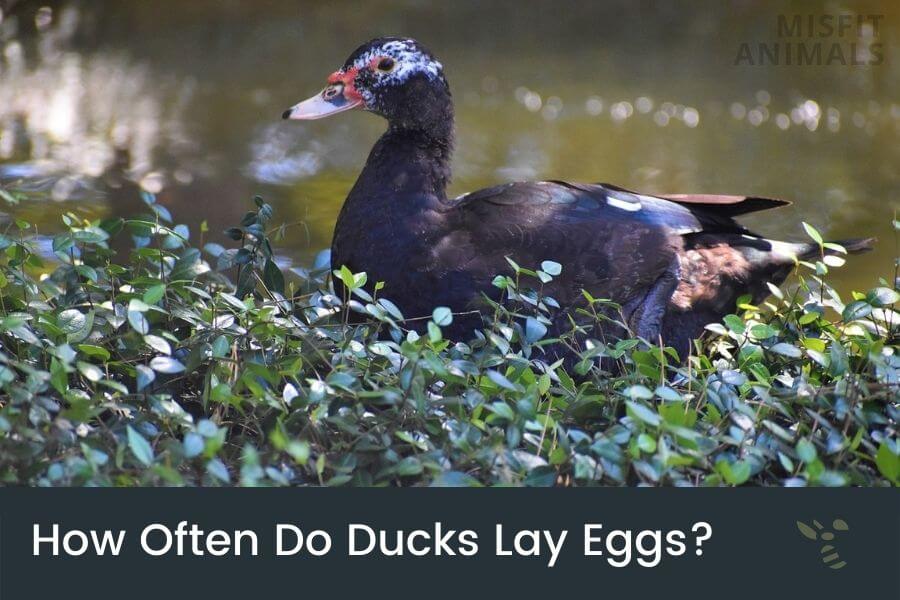 Ducks lay eggs almost every day. A normal duck may lay eggs between 50% and 90% of the days, resulting in 16 to 28 eggs per month.

Do you know how often ducks lay eggs? What factors influence when a duck will lay its eggs? How do you tell if a duck’s eggs are fertile or not?

Ducks, like chickens, lay a lot of eggs. They’re used for their meat and eggs on farms and are also kept by some hobbyists.

In this article, we’ll dive deeper into how often ducks lay eggs, what may affect this, and more.

How Often Do Ducks Lay Eggs?

Ducks can produce an egg every 24 to 48 hours, depending on several factors. This results in ducks laying eggs 50% to 90% of the days.

Ducks are extremely fascinating animals. They exert influence over the environment in which they live, and they play a major role in how their ecosystem functions.

But how often do they lay eggs?

Yes, ducks can lay up to two eggs a day.

In the world of poultry farming, it’s important to know how often your flock lays eggs.

For backyard flocks, this information is also important as you want to make sure you have enough eggs for yourself and not too many that they accumulate into a mess or spoil.

Generally, ducks lay a maximum of one egg per day. When that’s said, there are exceptions to the rule. Sometimes, you may experience a duck laying two eggs in a single day.

Egg-laying in ducks is more regular than ducks in the wild. This is largely due to their regular feeding, whereas wild ducks may not always be able to find enough food.

Ducks do lay eggs regularly. Their egg-laying efforts aren’t affected much by mating. Females will lay eggs whether they’ve mated or not.

Ducks lay an egg every one or two days during the breeding season and may take a break for a day or two after the chicks have hatched from their eggs before starting again.

How Many Times Do Duck Lay Eggs in a Year?

Pekin ducks lay about 200 to 300 eggs per year, though this number may be greater or lower depending on the duck, its state, and other factors.

Healthy ducks lay eggs about 90% of the days in their prime. This means you’d have 90 eggs after 100 days.

Converted to yearly numbers, this would be about 328 eggs if nothing went wrong. The number of eggs yearly typically varies from 200 to 300, as ducks typically lay fewer eggs on cold days, shorter days, etc.

Ducks typically lay the most eggs in their first year, and their reproductive system starts slacking hereafter.

Related: When do ducks lay eggs?

How Many Months a Year Do Ducks Lay Eggs?

Most ducks will lay eggs all 12 months of the year. Ducks lay eggs at any time of year unless disturbed by environmental factors like extreme temperature.

Select breeds of ducks only lay eggs once a year during the springtime, when they mate, but most ducks lay eggs all year.

What Time of the Day Do Ducks Lay Eggs?

Eggs should also be collected in the morning to reduce breakage and contamination.

The most likely explanation as to why ducks do this is that their internal clocks tell them to. Ducks, like other animals, have an internal clock known as a circadian rhythm[2] that controls many of their biological functions. This includes things like sleeping and waking up, but also egg-laying.

Can Ducks Lay Eggs All Year Round?

Yes, ducks can lay eggs all year round, if conditions allow them. They may be affected by extreme cold and reduced light exposure.

Ducks’ egg-laying efforts are affected by weather conditions. However, they’re hardier than chickens and are hence able to lay eggs in more extreme conditions.

In the wild, ducks may halt their egg-laying due to temperatures. However, they typically migrate to avoid being stuck in a cold climate.

In captivity, ducks are typically located in a coop with temperature control in colder areas. Hence, the temperature is usually not the biggest issue.

Light exposure, however, can be a major problem. Ducks need light exposure to lay eggs, hence egg-laying may be reduced in the winter.

How Long Will Ducks Lay Eggs?

Ducks generally lay eggs for 3 to 5 years but may do so for even longer. The lifespan of ducks is typically about 10 to 15 years in the wild or in captivity.

There are many types of ducks. Some species live longer, and will hence lay eggs for longer.

The general idea is that Pekin ducks, which are white, domestic ducks, lay eggs for anywhere between 3 to 10 years.

In the beginning, they’ll lay a lot of eggs. This is because they’re young, and their reproductive system is working in an optimal state. As they get older, egg-laying will slow down, until they don’t lay eggs anymore.

The average duck will lay eggs for 3 to 5 years.

When Do Ducks Stop Laying Eggs?

The simple answer is, that ducks will lay eggs until they’re between 6 and 9 years old. However, this is not always that simple.

When a duck reaches around four or five years of age, she’ll only lay on average about two-hundred eggs per year, but that number will drop significantly to around fifty eggs by her sixth or seventh birthday.

Some ducks may continue to lay eggs until they’re 10, or even 12 years old.

It is a common misconception that the eggs from ducks are no different from those of chickens. While they are different, they’re also very alike.

The only difference between duck eggs and chicken eggs is that there is more iron and slightly less cholesterol in duck eggs, as well as a stronger shell [3].

These differences are negligible for most people, and duck eggs taste exactly like chicken eggs.

The biggest difference between duck and chicken eggs is their size. Duck eggs maybe 50-100% bigger than those from chickens.

Some people also claim that duck eggs have a richer, and creamier, taste.

Will a Duck Sit On Her Eggs if They Are Not Fertile?

Yes, ducks may sit on their eggs, even if they’re infertile. This is also seen in chickens.

Female ducks in captivity typically lay infertile eggs. In other words, the eggs won’t turn into ducklings, as the female hasn’t mated with a drake (male duck).

However, this doesn’t mean she won’t sit on the eggs. Sometimes, ducks do still sit on their eggs in the hope of them hatching.

How Often Do Ducks Breed?

Ducks breed once a year, during their mating season[5].

Ducks don’t mate for life. They form seasonal bonds, changing mates every year. They’ll start pairing up from December to March, which is different from songbirds that find their mates after they’ve arrived at their breeding grounds in the spring.

Related: How Do Ducks Mate?

When it comes to egg production, there are many factors that affect the number of eggs laid by hens.

It’s very important to feed ducks quality food if you’re looking to produce healthy and proper eggs. If the food quality is poor it will affect duck egg-laying, both in captivity and the wild.

Polluted ponds and rivers may affect wild ducks, whereas food containing a lot of medicine, or pesticides, can affect ducks in captivity.

A lack of food, of malnutrition, can also halt egg-laying.

Related: What Can Ducks Eat?

Hydration is crucial for all animals, including ducks. If ducks don’t get enough water, they may stop laying eggs, as a lot of water is used for eggs.

Hence, make sure that your ducks have plenty of drinking water.

Lighting and heat can affect egg-laying in ducks. Ducks need proper living conditions to lay eggs. If the temperature is too cold, or too hot, they may slow down egg-laying.

The same goes for lighting. Ducks, and other birds, lay more eggs when there’s more sunlight. They need about 14 to 16 hours of light a day to lay eggs every day (or 90% of days).

You can implement artificial lighting to increase egg-laying during the winter.

In ducks, stress has been linked to causing reproductive issues such as laying eggs with thin shells or no shells at all. It is hypothesized that the stress hormone cortisol may be responsible for these problems.[4]

One study found that ducks housed in small groups laid more eggs than their counterparts which were kept in larger groups. This indicates that being around other ducks reduces stress, allowing for better egg-laying, but that too many ducks can increase stress.

Boredom can affect many different types of animals, and one example is the duck. When ducks get bored, they might stop laying eggs.

Ducks are social animals, often staying in groups. Females often quack when they’re alone, to let other ducks know of their location.

Related: Why Do Ducks Quack?

Yes, ducks do indeed need light to lay eggs. They need about 14 to 16 hours of daylight a day. One way that duck keepers go about dealing with that in the winter, is to introduce artificial light. You can simply supplement the natural daylight with artificial light to increase egg-laying.

Ducks lay eggs regularly, laying eggs up to 90% of the days (90 eggs per 100 days). While they can lay two eggs in a single day, this is very uncommon. The average duck lays about 200 to 300 eggs per year, after its first year.

There are many factors that can affect egg-laying, such as food quality, water, lighting, temperature, stress, and more.