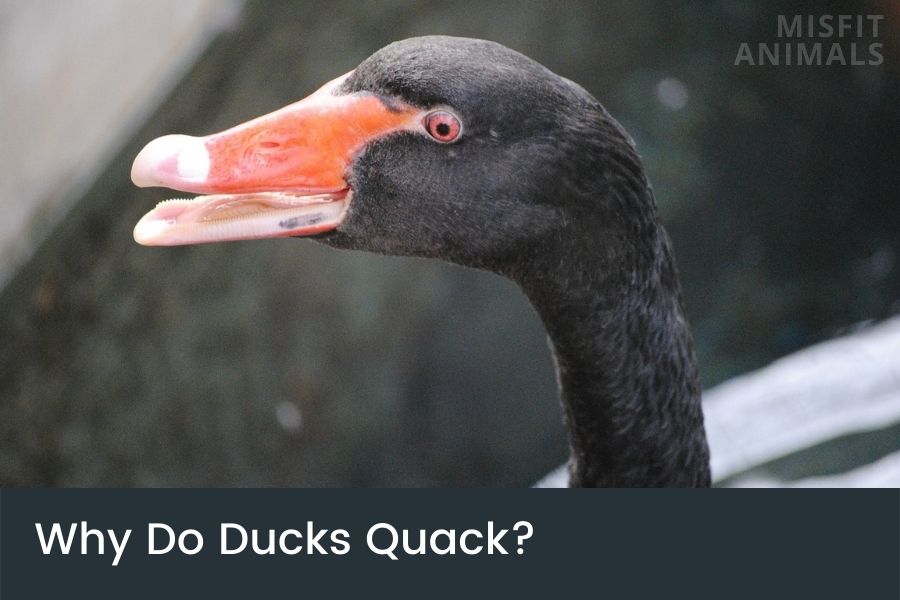 Ducks quack to communicate. While it’s only the female ducks that quack, they do so frequently, as it’s their main form of communication.

Ducks are, like most other animals, vocal. They use vocalization to communicate with each other.

Female ducks can quack, but not all males can. They primarily do so to either warn other ducks or to get attention.

In this article, we’ll talk more about why ducks quack, how they quack, and which ducks don’t quack.

Why Do Ducks Quack?

Ducks quack to communicate. They do so to get attention when they’re feeling alone, to warn other ducks, when they’re happy, and more yet.

The familiar quacking sound that humans know comes from the mallard duck.

Mallards are found all over the world, including North America, Europe, and Australia. They breed in almost any climate and can even be found in cities like London.

Some ducks make other noises besides the familiar quack of a mallard. These noises include whistles, warbles, and hisses. It is possible that they are communicating with each other.

Let’s dive in a bit deeper to know the most common reasons why ducks quack.

Communication is a process by which information is exchanged between individuals, groups, animals, and plants.

Ducks are a good example of an animal that has evolved a specialized form of communication.

Ducks use quacking to communicate with each other. Ducks primarily use vocal communication to pass on information, which is why they quack too much.

Ducks quack when they’re feeling lonely, and this behavior is particularly common in birds that are monogamous. When a duck is separated from its partner, it may quack to try and find them again.

This also tells us that ducks are able to process a feeling similar to loneliness.

To Let Other Ducks Know Their Location

Ducks quack to let other ducks know their location. It can be difficult for ducks to see each other when they are swimming in a large group, so they use quacking as a way to communicate with one another.

It helps the ducks stay together and avoid getting lost.

They also do this if they’re missing their mate. They’ll quack to lead their mate back to them.

When They Lay Eggs

When ducks lay eggs, they quack. The quacking serves a purpose. It alerts other ducks that a nest has been made and that eggs are present. It encourages them to help incubate the eggs.

Some people think this is because the duck is happy and proud of its accomplishment.

Ducks typically lay their eggs in the springtime. They enjoy this time of year because they can mate more frequently, but it’s also the best time for eggs to hatch.

To Warn About Threats

Quacking also serves as an alarm to let other ducks know that there is something to be wary about. This can be a potential predator or threat.

This is especially done by mother ducks, as they are very protective of their ducklings. They’ll use their quacking to warn their baby ducks, other nearby ducks, as well as intimidate threats.

While there is some discussion on the topic, some people believe that ducks quack when they’re happy.

Mother Ducks Quack to Their Ducklings

When a mother duck quacks to her ducklings, she is communicating with them. Ducks use quacking to signal danger, locate each other, and direct their young.

Ducks use quacking to locate each other. When a mother duck is looking for her ducklings, she will call out to them. The ducklings will respond with their own calls and the mother will be able to find them more easily.

Why Do Ducks Quack at Night?

One reason is that they may sense a predator and are trying to communicate with other ducks to warn them.

Another reason is that they want to let others know where they are, or if they have other information they want to pass on.

Another reason ducks quack at night is because they’re up feeding. Ducks are usually awake and active during the day, but at night they’ll sometimes start to look for food.

When they find something to eat, they’ll quack so that other ducks know where they are.

How to Keep Ducks Quiet at Night

As anyone who has ever heard ducks quack knows, they can be quite loud. This can be a problem if you live in an urban area and want to keep your ducks quiet at night.

There are a few things you can do to help keep your ducks from making too much noise:

Ducks don’t always quack, but they do quack quite frequently. They do so because it’s their primary form of communication.

Quacking occurs when female ducks are communicating with other ducks but males do not make noise as much. This can also happen in aggressive encounters between male ducks.

Male ducks do not always quack, but female ducks usually make a lot of noise.

Do All Ducks Quack?

There are many different types of ducks in the world, and not all of them quack. Of course, there are exceptions to every rule, and there are some male ducks that do quack from time to time.

In general, quacking is a behavior that is typically associated with female ducks.

Is It True That Only Female Ducks Quack?

The short answer is yes, it is true that only the female ducks quack. The male ducks make a different sound, which is more of a raspy, silent sound compared to a quack. [2]

Some male ducks make a sound very much like a honk, but it is not the same as a quack. The female duck quack is much more familiar to most people when they think about what duck noises are.

Why Do Male Ducks Not Quack?

Male ducks, and many other waterfowl species, do not typically quack. However, they do make a raspy sound.

The typical reason why male ducks don’t quack is that male ducks lack the necessary parts to produce the typical duck quacking noise.

For example, male ducks don’t have an outer ‘other’ (specialized vocal cord) that is found in female ducks and other quacking waterfowl. This outer ‘other’ vibrates and creates quacking noise.

Another reason why male ducks don’t typically quack is because of how their voice box is structured. The larynx (voice box) of a male duck is positioned differently than in female ducks and other quacking waterfowl.

This positioning prevents the male duck’s larynx from vibrating as much, which is necessary to produce the quacking noise.

Yes, baby ducks quack. Indeed, they are the only young of any bird known to do so. That is because duckling vocalization is different than that of other birds.

A young bird will produce sounds by vibrating its voice box (syrinx) while forcing air through it. To do this, they usually have to inflate their lungs with air. The vibration that comes from this causes the noise.

Besides the classic quack, ducks also make a lot of other sounds, including barks, chatters, growls, and groans.

Ducks make a lot of sounds. These sounds are used for various purposes, such as communicating with other ducks, warning others of danger, or showing aggression.

Ducks use barks for communication in close groups. A group of ducks will bark at each other as a way of keeping in touch. You may also hear ducks bark when they’re playing or when they’re upset.

Ducks quack for various reasons. They can warn other ducks of danger, they may be wooing a potential mate or they might just want to show off their vocal prowess.

Only female ducks quack, as male ducks have different voice boxes. While they don’t quack all of the time, they quack quite often.