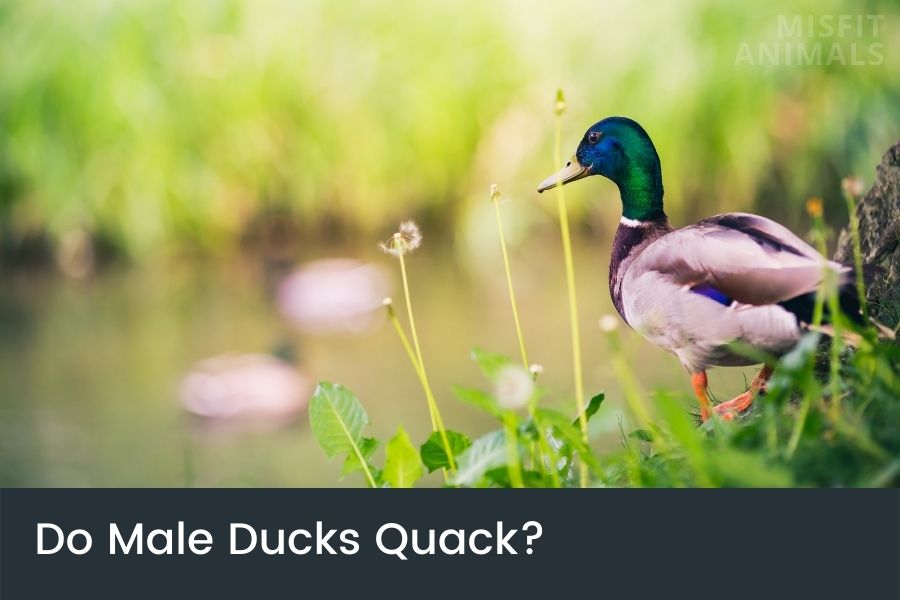 Male ducks don’t quack. This is because of the way their voice box is structured. They typically make a more raspy sound, which is not as noisy as the female quack.

Did you know that male ducks don’t quack? They make different sounds, and even have their own sound called a “drake call.”

In this blog post, we’ll explore the reason why male ducks don’t quack and what their drake call sounds like.

We’ll also take a look at some of the other fascinating differences between male and female ducks.

Unlike the female duck, the male does not quack. Instead, males produce quieter, rasping, one- or two-noted calls.

This call is used mainly in interactions with other males and during courtship rituals. The male’s sound is quite different from the female’s and is often described as sounding like a ‘whistling teakettle.’

Females use their quacks to communicate with their young and also to warn other ducks of possible danger.

While both male and female ducks have vocal cords, the males are not built for quacking. The male’s vocal cords are longer and narrower than the female’s, which gives the male’s call a higher pitch.

So, do male ducks quack?

The answer is no, they don’t. The male’s voice is not suited for quacking and is actually quite different from the female’s. Instead, males produce quieter, rasping calls that are used mainly in interactions with other males and during courtship rituals.

Male ducks don’t quack because their voice box isn’t built for quacking. They simply don’t have the necessary biological adaptations for quacking.

This is like asking why humans don’t fly. Because we don’t have the necessary biological adaptions to fly.

This is why you’ll often hear male ducks making a low noise that sounds more like a humming or purring than a traditional quack.

Interestingly, the male Pekin duck’s voice box is also responsible for his trademark white neckband. The resonant nature of the male duck’s voice box causes the air passing through it to vibrate, which in turn creates the distinctive white band on his neck. [2]

What Sound Does a Male Duck Make?

Male ducks make very deep, penetrating sounds that sound vaguely like a cross between a wolf-whistle and a human groaning. It is believed this is how males attract females during mating season.

When drakes make their mating call, they try to get the attention of female ducks. This is part of their courting process. [3]

The female duck’s call is hoarse and quacks loudly for an extended period of time. It is often described as a “yelling” or “screaming” noise. Females use their quacking call to communicate with other ducks, warn of danger, and attract mates.

Male ducks do whistle, but it is not always clear why they do this. Some researchers believe that the whistle helps males attract mates, while others think that the sound may serve as a warning to other males.

Male ducks usually start whistling once they reach full maturity. They make this sound by pushing air through their voice box, much like when humans speak.

While ducks are known for their distinctive quack, but this sound is made only by females.

The whistle serves different purposes for different ducks, but it is clear that this sound is an important part of their communication.

Do All Ducks Quack?

No, not all ducks quack. Only female ducks quack, while male ducks make other sounds, often referred to as a raspy whistle.

Out of the world’s species of ducks, only female ducks quack. Males do not make a sound when they call to females because their vocal cords and voice box aren’t built the same way.

Interestingly, the quack of a duck is not just used for positive communication. It can also be used as a warning to other ducks. Female ducks will often quack when they’re alone, to let other ducks know about their location.

Why Do Female Ducks Quack?

Related: Why do ducks quack?

Communication is key. This is true for all species, not just humans, and ducks are no exception. Female ducks quack primarily to communicate with other ducks, both male and female.

Duck quacks are highly individualized and can carry a lot of information. For example, a female duck’s quack can tell other ducks whether she is happy, sad, angry, or scared.

It can also be used to let other ducks know where she is, what she is doing, or when she will be back.

The quacking of ducks is a fascinating way for these animals to communicate with each other. It is one of the many things that makes ducks so interesting and unique.

Quacks are also used as warnings. In the wild, they will often quack to warn other ducks of danger lurking nearby.

For example, if a predator is spotted, the ducks will give an alarm call to warn the others of the danger.

While male ducks do not quack, they can still use their raspy sound to warn other ducks.

While female ducks quack for many reasons, warning others of danger is one of the most important. When you hear a duck quacking, it’s important to be aware of what might be happening nearby. Whether it’s a predator or something else, knowing how to stay safe depends on being able to hear the warning call.

Male ducks don’t quack. Instead of quacking, they make a raspy noise, often described as whistling. Quacking is strictly unique to female ducks, and they use this as their primary way of communicating.

Male ducks can’t quack because of their biological adaptations. Their voice box and vocal cords aren’t built for quacking.