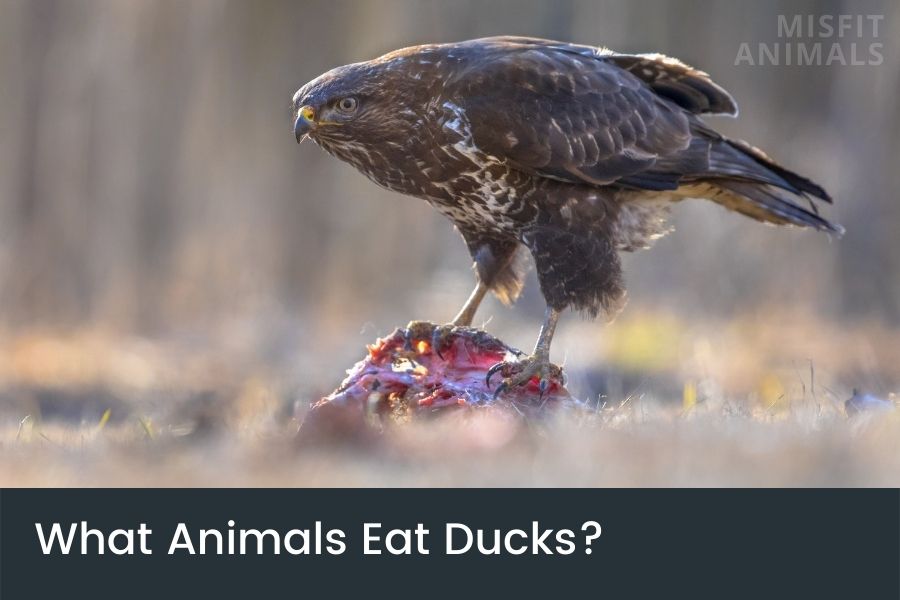 Ducks are common prey for many animals. Some of the most well-known predators that eat ducks include coyotes, foxes, and raccoons.

Ducks are at the bottom of the food chain, and hence have plenty of natural enemies that are all looking for a bite to eat.

Many of these predators feed on ducks, as well as similar-sized animals such as rabbits.

In this article, we’ll go through these duck predators, and provide some information about each one.

Here is a list of 13 different animals that eat ducks:

Foxes are one of the duck’s biggest predators. Ducklings are at risk early on in their lives, as they can fall prey to foxes for many reasons. [1]

Foxes are very quick, and can easily catch ducklings that are roaming around on land.

Ducks are also noisy and tend to quack when they’re scared or trying to get away from a predator. This can draw the attention of foxes, as they have great hearing.

Lastly, foxes hunt at night, where many ducks are also active. This makes ducks great prey animals for foxes.

Ducks are seen as easy prey by coyotes. While ducks can fly away, coyotes can be very fast and love to prey on the occasional duck.

Coyotes primarily hunt for other small animals, such as rodents or hares, but won’t pass an opportunity for an easy meal.

Also, ducks are often active during the night and early mornings, which is when coyotes are also active.

Minks are among the most common duck predators [2]. The main part of minks diet consists of birds and fish, making them very dangerous predators to ducks.

Mink are members of the Mustelidae family, which also includes weasels and badgers, among others. They were originally native to North America but have been introduced in many other countries for their pelt production.

Mink are noxiously hunted in Sweden because they prey upon ducklings.

They are found in many habitats, including forests and wetlands. They live on freshwater lakes and slow-moving streams, spending much of the day hunting prey near the water’s edge.

The mink has a long slender body with short legs and webbed feet; its fur is very thick and shiny.

They usually prefer duck, but will also eat ducklings.

Falcons are raptors, or birds of prey, that primarily eat small mammals such as rabbits and rodents, but will also prey on ducks and other waterfowl.

They have keen eyesight and hunting instincts that make them very effective duck predators.

Falcons usually hunt ducks by diving from the sky and then seizing the duck with their sharp talons.

Ducks can be very effective in defending themselves against falcons, but the raptors are often successful in killing or injuring them.

Hawks prey on waterfowl and will hunt and eat ducks, as well as rodents, rabbits, insects, and a variety of other animals. They use their superior flight capabilities to prey on ducks.

Hawks will take turns diving into duck flocks, securing their kill and a meal.

There are around 50 species of hawks, but they can be categorized into four groups: Accipiters, Buteonines, Falconets, and Accipitrines.

Accipiters are a group of smallish raptors that have short wings and long tails to help with their maneuverability through thick forests.

Buteonines have mostly adapted to high altitudes, with powerful wings, beaks, and legs.

Falconets are a small group of hawks, and they have evolved to hunt by staying still and waiting for prey to come by.

Accipitrines include are what’s known as “true hawks”, and are characterized by long tails, broad wings, and high visual acuity.

Herons are extremely large birds that prey on small animals like fish, frogs, snakes, turtles, rodents, and other water-dwelling creatures, including ducks.

For many people, herons are considered duck enemies because they are so often seen catching ducklings in their beaks.

Herons’ food habits change with the seasons and also vary based on where they dwell. When breeding season arrives, adult herons tend to eat smaller prey like small fish, amphibians, reptiles, and insects.

When herons hunt, they use their patients to their advantage. They’re capable of standing completely still for long periods of time, waiting for the right moment to strike.

One of the most dangerous duck predators is snakes. Snakes prey both on adult ducks, as well as ducklings. Some snakes can even swallow them whole. [3]

Snakes are predators, and will often eat small animals such as mice. They will also take part in duckling hunting.

Most medium- to large snakes eat eggs, both those from chickens, but also from ducks. Hence, they both prey on duckling before and after they’re born, though it’s much easier for them to catch an egg than a duckling. [4]

There are many different types of snakes that can prey on ducks, but some are more common than others. Some of the most common duck predators include the garter snake, the corn snake, and the milk snake.

Raccoons prey on ducks, if they get the chance, and can be very harmful to duck populations. Raccoons are opportunistic feeders, which means that they will eat whatever is available to them.

While raccoons don’t actively target ducks, they won’t pass on a meal.

When a family of ducks passes by a raccoon, the predator won’t hesitate. They’ll quickly take advantage and secure an easy meal.

This makes them a threat to ducklings, as they can easily snatch them up and kill them. Additionally, raccoons are very clever and persistent with their duck-hunt.

Badgers are duck enemies due to their ability to dig up duck eggs. Unfortunately, duck families are often victims of the badger’s appetite for delicious duck eggs.

Badgers are major duck predators across the prairie pothole region, as they like the taste of duck eggs.

These duck predators often make their homes in burrows which they use as habitats. They also build nests located near water which duck families often reside.

The badger is typically a solitary animal, and will most often also hunt alone.

Ducks are comfortable in the water, and often spend a great deal of time there during the day. As they eat vegetation from the bottom of ponds and pools, or small fish, they’re also in danger when hanging around water.

Ferocious freshwater fish such as pike and bass often prey on ducklings more prominently than adults. These fish are some of the few types that can swallow ducklings whole.

In saltwater environments, sea catfish and the giant trevally pose a threat to ducklings and ducks.

Crocodiles may prey on ducks. They are ambush predators that can lie in wait for hours submerged underwater, before attacking their unsuspecting prey. They are capable of killing ducks with a single bite.

Crocodiles are surprisingly fast creatures, which also makes them great hunters. While ducks can fly, they can’t always react fast enough to get away from a crocodile.

The Morelet’s crocodile and the American crocodile are known to prey on ducks.

Habitat destruction has also led to an increase in duck predation by crocodiles. As wetlands are drained and converted to other uses, crocodiles are forced to seek new sources of food, which can often include ducks.

Snapping turtles are the frequent predators of ducklings and duck eggs. They often burrow themselves, waiting for unsuspecting prey. When an opportunity arises, they’ll strike. [5]

Snapping turtles are opportunistic predators that will eat just about anything they can catch, including ducklings and duck eggs.

In fact, ducklings up to about 3 weeks old are easy prey for snapping turtles; grown ducks can be difficult for them to deal with.

The rest of the snapping turtles’ diet consists of amphibians, invertebrates (insects and crayfish), fish, small mammals like mice and muskrats, and dead animals.

Humans kill ducks for food, sport, to prevent overpopulation in specific areas, and for many other reasons. Humans are among the biggest duck predators on earth.

Humans were once duck predators because they needed the meat. But today, duck hunting is a sport where the human kills the duck for fun and glory.

Hunters often still eat what they kill, but most people will buy their ducks from the grocery store.

How to Protects Ducks From Predators

Ducks are prey animals and as such, they have many enemies in the wild. Some of the animals that eat ducks include raccoons, foxes, coyotes, hawks, and owls.

There are several ways to help protect ducks from their predators.

One way to help protect ducks is to provide them with a safe, secure duck house.

A duck house should be at least 5 feet off the ground and easy for ducks to enter and exit. Duck houses should face away from the prevailing wind, making it easier for ducks to access their home. This allows ducks to quickly enter their duck house during a storm or when threatened by predators.

Build Fencing Around the House

Another way to protect ducks is to install a fence around their housing and water/swimming area. A fence will help keep predators out of the duck’s territory. The fence should be at least 6 feet high.

In addition, it is important to keep the duck’s environment clean.

Dirty water, food, and duck feed all attract rodents, which can then attract predators. Making sure not to overfeed the ducks is also a great idea, as any excess food won’t attract rodents.

Giving ducks a safe environment to live in is one of the best ways to help protect them from predators. Providing duck houses, fences and limiting duck feed will also help prevent many potential duck problems.

There are plenty of animals that prey on ducks, including foxes coyotes, mink, falcons, raccoons, badgers, and many more. Humans also hunt ducks for their feathers and meat.

Some animals target the ducklings, as these are easier to catch, and not as big, while others prefer grown ducks, as these provide more food. The badger prefers duck eggs to live ducks.

If you want to avoid predators killing your ducks, you can do several things. The first is to build a proper duck coop, which can keep the ducks safe. You can also build a fence, and you should make sure their housing is clean.

Yes, ducks are predators, as they prey on fish and insects. They are also prey animals, as they are preyed upon by larger carnivores. This places them in the middle of the food chain.