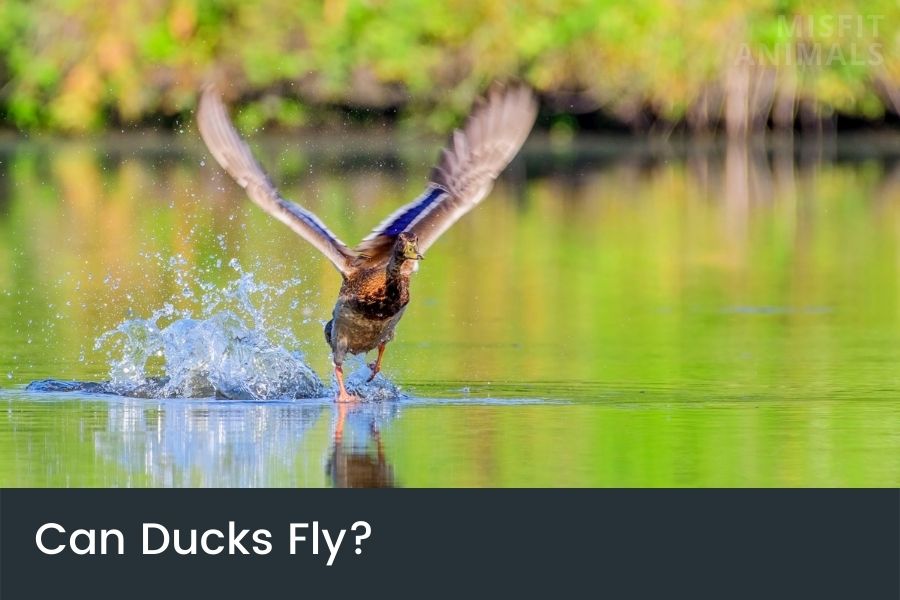 Yes, ducks can fly, but not all species. Ducks have smaller wings and don’t soar in the sky like hawks. Instead, they flap their wings rapidly. By doing so, they can reach upwards of 50 mph (80 kph).

Most ducks can fly. Not all of them can, but most.

Ducks have smaller wings, relative to their body size, and hence flap them rapidly to get going in the air. They use a series of mechanisms when flying, such as flight feathers and flight formations.

In this article, we’ll discuss the science of duck flight, how fast and far they can fly, as well as what they use their flight for.

Ducks can fly, but they are not the best flyers in the animal kingdom. They are not as agile as other birds and they generally don’t have the same stamina.

While ducks can’t fly as far or fast as other birds, they can still fly. Ducks fly to avoid predators, and they fly when migrating.

When getting into the flight, they either do so from land or from water.

Now, while most ducks aren’t the fastest flyers, the common eider duck is very fast. The fastest duck observed flew at a speed of 76.4 mph (123 kph). [1]

How Fast Can Ducks Fly?

Their wings are specially adapted to flying and can propel them through the air very quickly. Ducks use their wings to help them maneuver and to keep them in the air for as long as possible.

Ducks use a variety of flying techniques to help them get from one place to another. Some ducks, like the mallard, fly in a V-formation. This helps them conserve energy and travel further distances.

Other ducks, like the wood duck, can fly almost straight up and down to avoid obstacles.

How Far Can Ducks Fly?

Ducks can fly long distances, but it does depend on the species. Some ducks, like the mallard, can fly up to 800 miles without stopping.

As duck’s wings are on the smaller side, compared to other flying birds, they flap them more frequently to keep them in the air.

How Do Ducks Fly?

Ducks are able to fly because of their wings and special feathers. Their wings are specially designed for flying, and they use them to propel themselves through the air.

When ducks fly, they flap their wings a lot. This is because ducks’ wings are small, compared to the size of their body.

They Flap Their Wings

Ducks flap their wings by moving them up and down. This creates an air current underneath the wings which pushes the duck up into the air. Flapping their wings also allows ducks to fly more easily and with more control.

Compared to other birds, such as hawks, ducks flap their wings often. This is because they’re smaller and hence can’t use them to soar.

Ducks have two kinds of flight feathers: primary and secondary. Each type has its own purpose.

Ducks have long and stiff primary feathers. These are the wing feathers found furthest from the body. These are essential to flight and provide thrust.[2]

Secondary wings provide lift. Secondary flight feathers are closest to the body and vary in size from bird to bird. These are used for sustaining flight.

They blend together across the wing to create the smooth transition from primaries to secondary.

Related: Why do ducks have feathers?

The feathers on a duck’s tail create drag and lift as the bird flies, which helps to keep the duck in the air. Additionally, the feathers help to stabilize the duck while in flight, allowing it to maneuver more easily.

Tail feathers are also important for landing; they help to slow the duck down.

Do Ducks Fly in a Formation?

When ducks migrate, they will fly in a V-formation. Most birds tend to fly this way for purposes of optimal airflow over the wing and energy conservation.[3]

Many ducks are migratory birds, so they fly in flocks or V-formation to travel long distances more efficiently.

Why Do Ducks Fly?

Ducks fly in order to migrate, escape danger, and find food. They can take off from water and land, which makes ducks adaptable flyers.

Migration is an important process for ducks. They use it to travel to different parts of the world in search of food or better habitats when the weather conditions change.

When autumn arrives, the ducks fly south in large flocks. They may travel more than 1,000 miles before they reach their wintering grounds.[4]

Ducks also fly in order to escape danger. If they see a predator or feel unsafe, they will take it to the air. This can often give them an advantage, as predators usually cannot fly and hunt ducks at the same time.

Finally, ducks fly in order to find food. Ducks are omnivores and eat both plants and animals. They often fly over bodies of water in search of fish, frogs, and other aquatic creatures.

They can also find food on lands, such as insects, seeds, and berries. By flying to different areas, ducks can access a much larger food supply.

Flying ducks generally migrate at heights between 200 to 4,000 feet above the ground, but the maximum height recorded is about 21,000 feet.

Ducks can fly at very high altitudes. While they generally keep between 200 and 4,000 feet, they can reach much higher. A jet plane once hit a mallard duck at 21,000 feet.

So what is it that limits ducks from flying high? The weight of their bodies.

Ducks will generally keep lower, as their bodies are bigger, compared to their wings size than other birds. As there’s less oxygen at higher altitudes, it makes flying more difficult and takes more energy.

Can All Ducks Fly?

No, some ducks can’t fly. An example is a Falkland streamer, which is incapable of flying. Most domestic duck breeds have also lost this ability, either due to flight feather clipping or evolution.

However, there are still some duck species that can fly proficiently.

For example, the mallard is a very good flyer. It is able to reach high altitudes and speeds.

Ducks do migrate, although it comes down to species and habitat. There are different types of ducks, and some don’t migrate at all.

Different duck breeds live in different parts of the world. Migration happens because the weather conditions change, and the temperature drops too low for ducks to thrive.

A frequent migrating duck is a mallard.[5]

Duck migration has been declining, as a result of declining wild duck populations, as well as milder winters due to global warming.[6]

Related: Where do ducks go in the winter?

How Far Do Ducks Migrate?

Ducks are some of the most well-known migratory birds, and they can fly quite far. They can migrate 800 miles without stopping once.

When ducks migrate, they fly in a V formation, with the lead duck breaking the wind for the rest of the flock. This allows them to fly further and conserve energy.

When Spring comes around, they’ll return to the areas they left during the fall.

When it comes to flying, there are many questions to be answered. Under certain circumstances, ducks won’t fly, but they can typically fly in most conditions.

Here are some common questions about duck flight.

Can Ducks Fly at Night?

Ducks are able to fly at night, thanks to their specially adapted eyesight and navigational abilities. They typically fly at night when migrating.

Many ducks species are active at night, while others are active during the day. Nocturnal ducks frequently fly at night.

Their eyes are placed on the sides of their head, giving them a wide field of vision that allows them to see well in low-light conditions.

Ducks can also navigate by following landmarks or using the sun and stars as reference points.

Ducks take to the sky at night to escape from predators that are unable to see in dark conditions. During the day they can be seen sunning themselves on a lake or pond, safe from land-bound animals that prey on them.

Can Ducks Fly in the Rain?

Yes, ducks can fly in the rain, but they don’t fly in extreme conditions.

Ducks’ feathers are waterproof, meaning a slight rain doesn’t have much impact on their flight capabilities.

Ducks are not able to fly in extreme rain, and will instead stay land-bound. As they are waterfowl, they thrive in rain, even heavy rain, but it can disturb their flying.

Can Ducks Fly With Clipped Wings?

No, ducks can’t fly with clipped wings. Clipping birds’ wings is a technique used to keep them on the ground.

Ducks cannot fly backward. Ducks fly forwards, as they need to see where they’re going. Only the Hummingbird can fly backward.

Ducklings can fly within five to eight weeks after birth. This is because their flight feathers aren’t developed until after these initial weeks. Once ducklings are mature enough, they simply need a running start before taking flight.

There are many breeds of ducks, spanning the globe. Each breed has its own distinct features, habits, and behaviors.

A few of the most common breeds of ducks are the Mallard duck and Pekin duck.

Mallard ducks are great flyers and can reach speeds of up to 60 mph, though the average is about 50 mph. When migrating, they can fly up to 800 miles without stopping.

Mallards will fly away from danger, like predators and humans with nets. When mallards fly, they often flap their wings very fast to stay in the air.

No, Pekin ducks cannot fly. The reason why has to do with evolutionary adaptation, which changed the shape of this breed’s wings.

Pekin ducks are large, domesticated waterfowl that are popularly kept as pets or used for their meat.

Ducks are some of the most common domesticated animals found on farms.  People all over the country tend to these ducks for their eggs, feathers, and meat.

Domesticated ducks cannot typically fly because they have been bred to be much larger than their wild counterparts.

Most duck species can fly. They tend to fly at speeds between 40 to 60 mph and can fly up to 800 miles without stopping. When ducks fly, they flap their wings more frequently than other flying birds, as their wings are shorter.

Domestic ducks have, through evolution and clipping of flight feathers, lost the ability to fly.

Ducks use their flight ability to find food, escape danger, and migrate. When fall comes around, they’ll fly south for warmth and food.