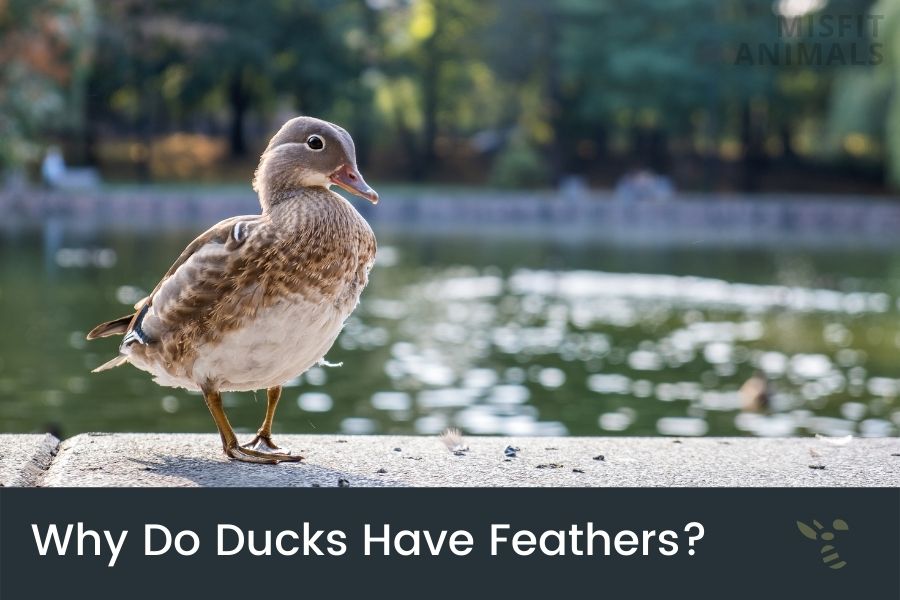 Feathers are one of the reasons why ducks are categorized as birds. They help them swim, fly, preserve heat, protect them against the weather, and attract mates.

It’s common knowledge that ducks have feathers, but few understand why.

Ducks use their feathers for many purposes, including insulation, flight, and mating.

And they don’t just have one type of feather, but four.

In this article, we’ll take a closer look at the reasons ducks have feathers and what evolutionary benefits they offer.

Why Do Ducks Have Feathers?

The primary reasons why ducks have feathers are for protection against the weather, to find mates, and to fly.

Feathers are like armor for birds. They do not only use them to fly, but also for swimming, protection, and more.

Their feathers mostly help them stay warm in cold weather and attract mates during breeding seasons.

Let’s take a closer look at its primary purposes.

Birds are defined as warm-blooded egg-laying vertebrate animals distinguished by the possession of feathers, wings, a beak, and typically by being able to fly.

The definition of ‘bird’ can be found in many dictionaries.

Simply put, a bird is a winged animal that is covered with feathers. Because ducks have wings with feathers, they’re birds.

Feathers are special to birds because they serve as insulation against the cold, as well as protection against predators, wind, and rain. Ducks wear their feathers underneath a layer of downy fluff which keeps them warm and dry throughout the harsh winter months.

Ducks Use Their Feathers to Fly

When ducks fly, they flap their feathered wings. By flapping their wings, they create enough lift to lift them off the ground.

Now, why would ducks need to fly?

Ducks are migratory birds, meaning they leave cold grounds in the fall and winter and fly south for warmer nesting grounds. In the spring, they fly back. This allows them to live in optimal conditions all year round.

Not all ducks can fly. Pekin ducks, which are domestic ducks, are typically too heavy to fly.

Related: How do ducks fly?

Ducks have a unique way of staying dry. They’ll cover their feathers in a special oil, called preen oil, which they secrete from their oil glands.

Drakes Use Their Feathers to Attract Mates

Drakes have colorful feathers to attract females. While female ducks are typically brown, the drakes (male ducks) have a variety of colors.

In most species of duck, there is a significant difference between the male and female in terms of physical appearance[3].

The male will be brightly colored with some type of striking pattern on their feathers, and the female will tend to look dull and plain by comparison.

This is because the males have to court females in order to breed. The females will choose a mate depending on their color, as well as mating call and dance.

The colors allow drakes to attract mates by flashing their colors. Without their bright, colorful feathers, drakes would have a difficult time attracting a mate.

Related: The horrifying truth about how ducks mate

Their Feathers Protect Them From the Weather

Ducks are some of the most common waterfowls. One of the most important uses of their feathers is for protection against the weather.

Feathers, and preen oil, are what make ducks waterproof. They also make ducks resistant to cold temperatures[4]. This allows them to inhabit cooler areas.

The outermost layer of a duck’s feather is water-repellent and acts as a barrier that helps keep out moisture from getting in. The downy under feathers keep them warm.

There are four different types of feathers that all ducks have:

Let’s take a closer look at each of them.

The contour feathers of a duck are the largest and most visible of its feathers. These are the outer feathers. They provide structure and warmth for the bird, and also aid in flight and waterproofing.

They have an indentation that sticks out from one side of each feather shaft giving it a serrated look.

This indentation is the only part of the feather that makes contact with other feathers, while flying or preening, and may be responsible for the ruffled appearance many birds have when their contour feathers are ruffled.

Down feathers are very soft and light. They help ducks insulate themselves. The down is located underneath the top layer of the waterfowl’s contour feathers.

The down feathers are small, delicate feathers. When ducklings are born, they only have this type of feather, which is why they look so fluffy.

Typically, down feathers are used by humans in the creation of insulating materials, such as comforters and jackets.

Down feathers are relatively small when compared with other types of feathers, so they can also be used for other purposes.

Female ducks also use their down feathers to build out their nest when they lay fertilized eggs.

Semiplume feathers make up the undercoat of all duck feathers. They work as insulation. These are located between the down feathers and the contour feathers.

Filoplume feathers are stiff hair-like feathers appearing at the base of contour feathers. They are small, measuring about 6 millimeters in length. Despite their small size, they are distributed throughout a large portion of the bird’s body.

Unlike other feather types, experts still don’t know what these do.

Are Ducks Born With Feathers?

Yes, ducks are born with feathers, but only down feathers. Their contour feathers aren’t fully developed until they are about 7 to 9 weeks old.

Ducks begin their lives with down feathers – fluffy white, yellow, or brown tufts of special downy feathers that are perfect for keeping the ducklings nice and warm while they hide away in their nests and learn to swim.

After a little while, baby ducks will develop contour feathers – the regular specialized flight and tail feathers we associate with adult ducks.

The ducklings grow these new feathers quickly, after just 7 to 9 weeks.

Do Ducks Shed Their Feathers?

Ducks shed, or molt, their old plumage at least once a year. During this process, they’ll grow out a completely new set of feathers.

When it comes to molting, ducks shed most of their feathers at once during a period of a few weeks. This is called the pre-basic molt. Ducks usually start this process in late summer or early fall.

Due to different environmental factors such as temperature changes, stress levels, and overpopulation, the molting process can occur outside of normal months or seasons.

The ideal environment for molting is to be in warm weather with little human interaction.

This is a very stressful time for ducks.

Why Do Ducks Pluck Their Feathers?

Ducks don’t just molt, but may also pluck their own feathers.

Female ducks pluck their down feathers to line their nest. When the female duck lays her eggs, she begins by assembling them in a circle and lining them with the soft fluff that is found on her chest under her wings.

She also does this to expose the brood patch, which is the bare spot after enough feathers have been plucked. The brood patch provides direct heat to the eggs when the female is incubating.

Why Do Ducks Have Tail Feathers?

Ducks have tail feathers primarily for stability and control during flight. They help with steering, turning, and so on. They also act as brakes during landing.

Why Do Ducks Have Bright Feathers?

Drakes have bright feathers to attract mates. They display their colorful plumage to attract attention from females, in the hopes that a female chooses to breed with them.

Male ducks have bright and colorful feathers, while females do not. Why is this?

Feathers are made of keratin, a protein that also makes up our hair and nails. These proteins reflect light into the visible range of light. A very small percentage of visible light reflects off of the keratin, reflecting colors towards our eyes.

The bright colors of male ducks help their mating efforts because the females will be attracted to those bright colors. Females choose a mate based on:

Why Does a Duck’s Feather Not Get Wet?

Ducks’ feathers don’t get wet due to preening. Preening is when ducks secrete preen oil and cover their feathers with the oil. This oil is hydrophobic.

Duck’s feathers do not soak up any water, and instead, repel water.

This is possible due to the preen oil they secrete. Ducks will cover their feathers with preen oil. This coating of preen oil is extremely important in waterproofing a duck’s feathers.

Related: How Do Ducks Float?

Why Do Ducks Fluff Their Feathers?

Ducks rely on their feathers to keep them warm. They do so by trapping air between the feathers, which then heats up.

Fluffing their feathers allows them to trap more air and stay warmer throughout cold nights and days.

Birds have four different types of feathers, including contour feathers, down feathers, semiplume, and filoplume.